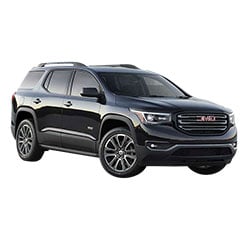 Should You Buy a 2017 GMC Acadia? Here Are Some Reasons For and Against

The 2017 GMC Acadia is an attractive option for families looking to settle on a midsize SUV with contemporary features and safety. In this post, we'll run down the top 10 reasons to consider buying the 2017 Acadia as well as a few that might give you second thoughts.

Relative to the 2016 model, the 2017 GMC Acadia has gone through a total redesign, so you should take a close look if you weren't interested in the 2016 edition. It is smaller, packs better value, and now has a new All-Terrain model.

The 2017 GMC Acadia's safety features are perhaps its most distinguished aspect. It is a Top Safety Pick from the IIHS and got a 5-star overall rating from the NHTSA. In addition to standard features like plentiful air bags, ABS, and rollover protection, the Acadia has new features like lane departure warnings to keep you and your family safe in many different driving environments.

The new design of the Acadia is low-cost, and you can get a feature set that is equal to or better than its rivals at a better price in most cases. Midsize SUVs can be a costly upgrade for new parents used to smaller cars, so the good value is a major selling point.

It's become standard to have a central touchscreen, but the 2017 GMC Acadia makes it a spacious 7 inches wide for easy use. The driver gets access to some buttons and knobs that allow for navigating the menus and controlling the radio without having to reach over and look at the screen. The infotainment system's menu is easy to navigate and has an intuitive interface for minimal frustration.

The interior of the car is full of handy extras. There are many storage zones throughout along with 5 USB ports for data or charging mobile devices, and if that isn't enough juice there's a 110-volt outlet in the second row. Multi-zone climate controls and a reminder to check the rear seat for forgotten items round out the driver and passenger-friendly cabin space.

As a crossover SUV, the Acadia fits neatly into the mold of having the space of an SUV but the driving experience of a car. Despite being tall, it doesn't feel like it rolls on corners and it is quick to respond to input. It's smaller than the 2016 model but feels even tighter and more smooth, making both the riding and driving enjoyable.

The 2017 GMC Acadia is projected to reach approximately 21 MPG in city driving and 26 MPG on highways. Although this is roughly average for a contemporary crossover, the low base price means that you can enjoy greater savings, because you usually have to pay considerably more for efficiency. Note that the optional V6 engine has about 5 MPG fewer on both city and highway roads.

You might expect that the lower price of the Acadia means that the standard set of features is limited, but this is not the case. Onboard support for both Android and iOS smartphones and a WiFi hotspot along with the efficient engine and comfortable cabin are just a few examples, and rival crossovers usually offer fewer standard inclusions. If you choose to move up to the SLT1 trim level, you can add several advanced safety features.

The standard trim has three rows of seating that can accomodate up to seven passengers, and despite being smaller the 2017 version still feels comfortable. The second and third rows can both fold down for extra cargo space, giving the model significant versatility. That makes it suitable for carpooling, taking kids to soccer practice, or family drives out to Grandma's for Christmas vacation.

There are two engines available for the 2017 GMC Acadia. The standard 4-cylinder is more efficient, but the optional V6 is more powerful and quieter. The best one for you depends on how much time you plan to spend on the highway- more time at higher highway speeds makes the stronger engine more attractive. For local driving the efficiency of the I4 wins out.

The new design of the 2017 model has drawn the Acadia closer to car-like lines, moving away from the tendency towards boxiness that made the 2016 model a little unattractive. The overall picture is of a slimmer and more engaging vehicle, one that shows how well it can drive without compromising its SUV identity.

The exact amount of cargo space available depends on how many seats are folded down, but with all of them up, there's just 12.8 cubic feet, and that only increases to 41.7 with the third row down. That's less than other crossovers, so if you need lots of space or need all three rows for passengers plus some extra cargo space, you'll need to look at other options.

Despite the low entry price, the top trims for the 2017 GMC Acadia quickly increase in price, making it much less of a value buy. Some of the trim levels add some excellent advanced features, but the highest ones approach the luxury category in cost. Other models tend to be better deals for those higher-end feature sets.

Although the 2017 GMC Acadia handles well, with the base engine it doesn't deliver quite as good a driving experience as some performance-oriented rivals. You will usually need to pay more for better driving, but the Acadia could use a slightly stronger base engine without compromising on efficiency to make it a top performer for the midrange crossover class.

The 2017 GMC Acadia competes with the Toyota Highlander and Honda Pilot, among others. Compared to those cars, its main benefit is the very affordable and extensive standard feature set, and the main drawback is the lower cargo space.

The newly redesigned 2017 GMC Acadia is a major improvement over the 2016 model, and it's the perfect fit for average or smaller families looking for a value option. It's an exciting step and we can't wait to see how GM builds on this new design for 2018.