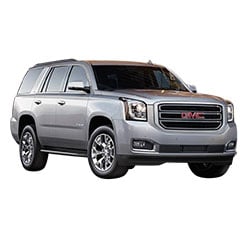 Should You Buy a 2017 GMC Yukon? Here Are Some Reasons For and Against

The 2017 GMC Yukon is a full-size SUV that brings much versatility to the table. Not only can it accommodate up to nine people, but it also has the ability to tow a heavy load. Passenger comfort remains one of the Yukon’s best qualities. If you are looking to experience a truly luxurious ride, step up to the top-of-the-line Denali trim.

With a total output of 355 horsepower and 383 pound-feet of torque, the standard V-8 engine proves to be quite potent. There is an abundance of passing power on tap. It even feels strong when traveling in hilly areas. If you need to tow a trailer, the SUV’s 8,500-pound towing capacity will surely come in handy.

The Yukon Denali model comes standard with an even larger V-8 engine. It punches out a muscular 420 horsepower and 460 pound-feet of torque. Unlike the base 5.3L engine, the larger 6.2L version is paired with an eight-speed automatic transmission. Regarding acceleration, the big SUV can hit 60 mph in less than six seconds.

Despite the SUV’s large size, it can still return impressive fuel economy. When equipped with the base engine, drivers can look forward to getting a solid 23 mpg on the highway. However, even the more powerful 6.2L engine can return up to 22 mpg. All versions of the 2017 Yukon are tuned to burn regular unleaded fuel.

The new GMC Yukon is just as rugged as a full-size pickup truck. If you plan to travel off-road, upgrade to the 4WD package. It comes with a two-speed transfer case, which optimizes the SUV’s traction on muddy trails. You will also be able to remain mobile during the winter time. A ground clearance of eight inches helps the SUV to perform well in the snow.

Because of its sheer size, some drivers will underestimate this SUV’s handling. However, the Yukon feels very secure on the road. Its body remains surprisingly well-planted when traveling on curvy roads. The steering system also does a good job of providing drivers with a great deal of feedback. You will definitely enjoy driving the Yukon on the open highway.

An attention-grabbing grille and striking projector headlights help give the GMC Yukon a powerful appearance. Side assist steps come standard. While the base SLE looks handsome, an optional set of 22-inch wheels gives the SUV a more commanding road presence. Xenon headlights come equipped with the upscale Denali trim. Some of the available exterior colors include Dark Sapphire Blue, Crimson Red, and Iridium.

You can fit up to nine passengers inside of the 2017 GMC Yukon. This is a significant advantage for the drivers who need to haul around extra family members. Many automotive journalists give the interior high marks for its high-quality design. Noise cancellation technology and leather upholstery are featured on the Denali trim.

OnStar comes standard on the 2017 GMC Yukon, which is viewed as one of the best emergency response systems on the market. Automatic braking technology gives you an extra degree of protection on the road. In the event that danger is detected, the optional Safety Alert Seat will begin to vibrate. Side Blind Zone Alert and lane departure warning are also offered.

A new Teen Driver feature is standard on the 2017 GMC Yukon. Parents can use this innovative feature to track their youngster’s location and monitor their driving habits. You can also set a speed limit.
Buying Tip: To avoid overpaying on a new car, shop prices online first. Get up front pricing before you walk into a dealership. We recommend the following free services; Car Clearance Deals, NADAguides, CarsDirect & Motortrend.
These free services will offer you the lowest prices and supply you with multiple competing price quotes. You will know the best price before you visit the dealer.

3) More Expensive Than a Three-Row Crossover