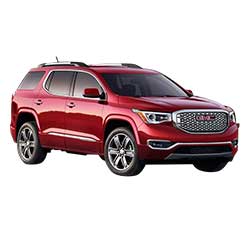 What 2018 GMC Acadia Trim Level Should you Buy? What is the Difference Between the Trims?

The GMC Acadia is another crossover SUV that has been adapted to the newly reimagined General Motors product line. In order to better differentiate the different crossover SUVs that GM makes, the Acadia has become a slightly smaller car as part of its 2017 redesign, but has also moved upmarket as GM positions GMC as its premium brand between the mass-market Chevrolet and the luxury Buick.

The new Acadia is still a spacious vehicle with the ability to seat up to seven, and offers both a high degree of material quality and a full selection of modern technologies. A choice of two strong engines and some decent off-road and poor-weather abilities combine to make it a very solid choice for many family buyers.

The 2018 GMC Acadia is functionally the same as the fully-redesigned 2017 model, but has had some of its options and features adjusted between trim levels based on the feedback for the first year of the new model. It still keeps the same six trim levels, but each one now offers a slightly different mix of equipment.

As choosing the right equipment and trim level is the key to any successful car purchase, we’ve reviewed each of the trim levels of the new Acadia in this article. We give you the rundown of the equipment added in each trim level, as well as the options that are available to customize each trim level further.

Compare the 2018 Acadia SL vs SLE-1 Trims. What is the difference?

The SL is the least expensive model in the lineup and it is fairly nicely equipped, though it falls a little short when it comes to optional features. Standard equipment on the SL includes the four-cylinder engine with front-wheel drive, a seven-seat cloth interior, keyless entry with push-button start, automatic tri-zone climate control, a rearview camera, a Wi-Fi hotspot, and a 7-inch infotainment touch screen.

The IntelliLink infotainment system included is generally considered by many to be one of the best in the industry, thanks to its crisp visuals, quick responsiveness, and an intuitive interface. It supports Bluetooth, Android Auto, Apple CarPlay, and satellite radio. As the base model, the SL only comes in a limited selection of colors and is only available with the smaller four-cylinder engine and front-wheel drive. It also offers no major optional packages.

The SLE-1 model is the lower of the two SLE trim levels, and offers very little in addition to the standard equipment from the SL. The SLE-1 comes with standard LED running lights and a satellite radio subscription, as well as a compact spare tire and carpeted floor mats. Its main draw are the various options that upgrading to this trim level opens up. The SLE-1 is available with both front-wheel and all-wheel drive, and the models with the latter can also be upgraded to the more powerful optional V-6 engine.

There are also a few packages to choose from on the SLE-1, but they primarily offer various premium or weather-resistant floor mats and cargo covers. The notable exception is the Black Accent Package, which adds blacked out grille inserts and adds a dark finish the the tail lights and license plate bracket. There is also an optional rear-seat entertainment options.

For buyers who don’t consider all-wheel drive important and are happy with the smaller four-cylinder engine, the Acadia SL offers a fairly good deal over the more expensive SLE-1, especially given the relatively limited additional functionality that the SLE-1 offers. For everyone else, the SLE-1 is a good starting trim level for the all-wheel drive equipment and the stronger engine that it offers.

Compare the 2018 GMC Acadia SLE-1 vs SLE-2 Trim Levels. What is the difference?

Unlike the SLE-1, the SLE-2 offers a pretty substantial basket of standard features over its predecessor. Its standard equipment includes a programmable power liftgate, front heated seats and a power driver’s seat, fog lights, remote start, roof rails, larger wheels, and second-row bucket seats. It is also the first Acadia model with a full complement of powertrains available. Both engines are available with either front-wheel or all-wheel drive on this model.

The optional packages are the same on the SLE-2 as on the SLE-1, with a few notable additions. The Driver Alert I package adds blind spot monitors, rear cross traffic alerts, and rear parking sensors, while the All Terrain package adds premium seats, a leather-wrapped steering wheel, hill descent control, and a more powerful all-wheel drive system. That package is only available in combination with all-wheel drive and the V-6 engine, and it offers the option to delete the third row in favor of more storage. In the two-row configuration, the second row is limited to a bench seat, however. An upgraded audio system is also available on all SLE-2 models. It replaces the 7-inch touchscreen with an 8-inch one, and adds an 8-speaker Bose sound system.

The base model of the SLE-2 adds a lot of popular features, and the available upscale upgrades like the premium audio and the active safety features also add to the appeal of the SLE-2. In general, the best value on the SLE-2 comes from adding one or more of the optional equipment packages. While the SLE-2 itself is a significant step up in price from the SLE-1, the options on it are relatively inexpensive for what they offer. Adding a few of them is a good way to get the most out of this trim level, for buyers that find room for it in their budget.

Compare the Acadia SLE-2 vs SLT-1 Trims. What is the difference?

Just like the SLE level, the SLT trim level is also broken down into two. The SLT-1 distinguishes itself through its perforated leather interior. It also includes the upgraded infotainment and audio, as well as the Driver Alert I package, from the SLE-2 trim level. A household-style power outlet, auto-dimming rearview and driver’s side view mirrors, and a power seat for the front passenger are the remaining standard options on the SLT-1. The SLT-1 also offers all of the same packages as the SLE-2, aside from those it includes as standard equipment. That includes the All Terrain package with the third-row delete option. It can also be optioned with a built-in navigation system.

The SLT-1 is a pretty big jump in price over the SLE-2, given the relatively few major standard features outside of the leather interior and even fewer exclusive optional features that it offers. Because almost everything available on the SLT-1 can be had on the SLE-2, upgrading is likely not a good idea for most buyers unless they really want a leather interior on their car.

Of course, the leather is fairly upscale, and looks very nice for this price point in the segment. Together with the rest of the upscale materials and the styling cues, this makes the SLT models visually attractive, which can be a good reason to purchase one as well.

The next tier of the SLT level, the SLT-2 trim level comes with with 20-inch premium wheels, memory for the driver’s side seat and mirrors, second-row seat heating, smart headlights, and a towing package. It also comes bundled with the Driver Alert Package II, which includes all the contents of the first Driver Alert Package, as well as forward collision alert with low-speed automatic braking, pedestrian detection, lane keep assist, safety alert seat, and front parking sensors. This gives the SLT-2 pretty much all of the modern active safety features as standard equipment.

The SLT-2 is available in both front-wheel and all-wheel drive, but it comes with only the V-6 as an engine option. It also can’t be optioned with the All Terrain package, and is available in only six- or seven-seat configurations. The rest of the optional packages from the earlier models are available, accepting the ones that the SLT-2 already includes.

With all of the added equipment, particularly when it comes to safety, the SLT-2 is easily worth the upgrade, and is one of the most cost-effective models of the Acadia along with the SL and the SLE-2. The only reason, aside from a slightly higher price, not to choose the SLE-2 over the SLE-1 is the lack of the All Terrain option with only two rows.

Drivers that are not using the third row will definitely appreciate the extra cargo space that it offers. Aside from that minor drawback though, the SLE-2 is a solid trim level that has excellent value within its price range.

Compare the Acadia SLT-2 vs Denali Trim Levels. What is the difference?

The premium Denali is the luxury version of the Acadia. It comes with a unique interior and exterior design including touches such as unique wheels and grille, as well as wooden inlays as accents throughout the interior. Its feature set is similarly upmarket. It comes with a navigation system, heated and ventilated front seats, a hands-free liftgate, HID headlights, and an automatic heated steering wheel. It also includes the same Driver Alert Package II as the SLT-2, and just like the SLT-2 is only available with a V-6.

The only major upgrade feature available on the Acadia Denali is the Technology Package. The Technology Package builds on some of the advanced active safety features that are included in the Driver Alert Package II. It adds an adaptive cruise control system, which will automatically match the speed of the car in front of you. It also enables automated emergency braking at all speeds, instead of just low speeds. Finally, it upgrades the standard rearview camera to a 360-degree camera system.

At close to $50,000 in price, the Acadia Denali definitely feels like a luxury car when it comes to its price point as well as its looks. In terms of features, the Denali does not quite reach the same level, making it a poor alternative for similarly priced luxury crossovers.

In particular, many competitors offer the exclusive safety features of the Denali as standard equipment, or at most optional on their mid-range models. Compared to the SLT-2, the added value is a fair one for the price, but the resulting high price point does bring the Denali against a tougher range of competition.

Those who like the Acadia and are attracted to the Denali’s features will get plenty of enjoyment out of this trim level, but buyers focused on value may want to check out other options in the same price range.

While the best trim level for each driver depends on his or her personal preferences in terms of equipment, style, and driving feel, the trim levels of the 2018 GMC Acadia that offer the most commonly asked-for features for their price point are the SLE-2 and the SLT-2. These trims offer great features, versatile options, and are only slightly more expensive than the trims below them.

The base SL is also a strong runner up, thanks to its strong standard features, though it is held back by the lack of a stronger engine and all-wheel drive. The SLE-1 and the SLT-1 trim levels are fairly good, but don’t offer that much relative to the trim levels above and below them.

Similarly, the Denali is nicely equipped and beautifully adorned, but it goes a little high in price for the segment in which it is competing to be a strong value contender.

Save Money on a 2018 GMC Acadia:
GMC Acadia Buying Guides: