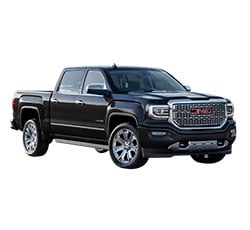 What 2018 GMC Sierra Trim Level Should you Buy? What is the Difference Between the Trims?

Despite being built on the same platform and technology as the Chevrolet Silverado, General Motors has managed to do a good job in carving out its own identity for the GMC Sierra. While the Sierra is not as popular as some of the bigger names in the full-size pickup truck segment, it is still both a competent work vehicle and a highly versatile all-around car.

The current generation of the Sierra was last redesigned in 2014, but has gotten a number of additional features and options since then. For the 2018 GMC Sierra, GM has added a standard touch-screen infotainment system to the model, as well as a rearview camera.

Like all pickup trucks, the GMC Sierra comes in a number of body styles in addition to the different trim levels that it offers. Those are similar to those of other trucks: a regular cab that seats up to three that is paired with either a long or standard-length bed, a double cab with a small second row and a standard-length bed, and the full two-row crew cab that can be equipped with either a standard-length or a special short-length bed. There are also three engines: one V-6 and two V-8s. Some trim levels, especially the higher-end ones, are only available with some of those configurations.

In order to help buyers decide, this guide will review each of the different trim level, touching both on their equipment and their availability in different body types.

Compare the 2018 Sierra base vs SLE Trims. What is the difference?

The Sierra’s base model, also named Sierra, is priced on par with other entry-level trucks, but comes with slightly more equipment. That is not to say that it is extensively outfitted, as this model is still meant to be more of a working truck than a leisure one. It is equipped with a standard rearview camera and a 7-inch touchscreen carrying a modern IntelliLink infotainment interface that supports Android Auto and Apple CarPlay out of the box, as well as Bluetooth for both hands-free calling and music streaming. It also has a six-speaker audio system, and includes power doors, windows and cruise control on all but the regular cab models.

This is one of the most versatile Sierra models in terms of mechanics. It can be had in all three body styles and bed combinations, and a choice of either the V-6 or the smaller V-8 engines, though the double cab models only come with a short box. Other options for the model include a few appearance packages and keyless entry and power windows for the regular cab models that don’t have them standard.

The SLE is a slightly more comfortable version of the base model that also offers several nice convenience options. It comes with cloth upholstery as an upgrade for the base Sierra’s utilitarian vinyl, an 8-inch touchscreen, and an easy-to-open liftgate with remote locking. It is also significantly nicer in terms of interior trim, with leather wrapping for the steering wheel and gear shift lever, as well as soft-touch materials for the dashboard and other contact surfaces. HD and satellite radio are part of the equipment on the larger infotainment system, and it can also generate its own Wi-Fi hotspot for the car using the OnStar 4G LTE connection.

The SLE comes with the same body and engine options as the base Sierra, with the addition of an option for the double cab and standard bed combination. It also comes with a larger selection of optional packages. The SLE convenience package adds rear parking assist, a sliding rear window with a defogger, and power-adjustable pedals. The value package adds a power driver’s seat, a remote starter, and a dual-zone climate control, as well as including the trailering addons as standard.

There are also a number of appearance option, including the aptly-named Black Pack that adds blacked out exterior elements, the upscale Elevation edition with larger wheels and body-color accents, as well as a special Texas version of the value package with unique badging. A special off-road suspension is also an option.

The additional equipment on the base Sierra model does make it a more attractive daily driver than your typical bare-bones work truck, but it is still not nearly as consumer-friendly as the SLE, which is likely to be the entry-level trim for most people who plan to drive their Sierra outside of business engagements. It has a much nicer and even somewhat upscale interior, as well as a greater number of connectivity and utility features.

The larger selection of options also makes it the more attractive of the two trims. The base Sierra is a great option considering its price, but for most it will be too much of a step down in terms of what they are used to, while the SLE does not have that problem.

Compare the 2018 GMC Sierra SLE vs SLT Trims. What is the difference?

The SLT is the trim level that begins to really separate out the GMC Sierra away from its Chevrolet twin. Leather, heated seats, and the dual-zone climate control are standard on this model. There is also additional chrome trim on the exterior and some nicer interior accents. It also removes the long bed and the regular cab options from the lineup, but provides a better selection of engines. The 5.3-liter V-8 is standard here, while the more powerful 6.2-liter V-8 is optional.

Where the SLT really shines are its various extra options. The Preferred Package adds front and rear parking assist, a heated steering wheel, and a power rear window. You can also option your SLT with Bose audio, which comes bundled with 20-inch wheels in the Premium Package.

The Premium Plus package further adds heated and ventilated front bucket seats, as well as the contents of the Preferred package. There is also an Enhanced Driver Alert Package, which includes a forward collision warning with low-speed automatic braking, a lane departure warning, parking assist and smart headlights, as well as a safety alert seat that vibrates when your car detects potential issues on the road ahead.

The same appearance options are available as on the SLE, as well as the All Terrain Package, which adds a special appearance package, a premium suspension, an auto-locking rear differential and skid plates on top of the Premium Plus equipment. A number of other upgrades and options are also available individually beyond those packages.

The added luxury and safety options really make the SLT what it is, and make it feel very premium for a pickup truck. This, together with the higher Denali model, are the versions of the GMC Sierra that really play to its strengths over the less expensive and more mass-market Silverado. As such, this would definitely be a trim level that we recommend anyone who is interested in buying a Sierra to check out.

Of the two trims, the SLE may be a preferred option if the luxury features of the SLT do not hold much appeal to you, but the SLT comes at such a relatively small price increase compared to the SLE that the savings may not be worth missing out on the much better equipped model.

Compare the Sierra SLT vs Denali Trims. What is the difference?

Denali is the high-end, luxury-oriented sub-brand of the GMC nameplate. The GMC Sierra Denali is easily representative of that philosophy, thanks to its striking appearance. It has a unique set of interior and exterior accents, including a more premium leather upholstery and wood-grain interior elements, along with plenty of chrome on the outside of the truck. This is matched with a nicely filled out feature set, including most of the options in the Preferred and Premium packages on the SLT and the active safety equipment. It also comes with an adaptive magnetic suspension system for both improved performance and better ride quality.

The Denali is available only with a crew cab configuration and a V-8 engine. The smaller V-8 is standard, while the larger V-8 is available as either a stand-alone option or as a part of the Denali Ultimate package, which also includes a power moonroof, 22-inch wheels, trailer brake controls and powered three-mode steps.

While the Denali is priced quite in line with its premium appearance and market positioning, debuting at north of $57,000 MSRP, that is only slightly more expensive than an SLT with all of the equipment options that the Denali includes. If you are already looking at a fully-loaded SLT-spec Sierra Truck, then a little bit extra can get you a very nicely appointed and smooth-driving vehicle.

If the luxury and convenience packages on the SLT hold little interest to you, and you are looking at a base model of that trim, or only one or two optional packages, then you are going to get a better value by sticking with the SLT.
Buying Tip: To avoid overpaying on a new car, shop prices online first. Get up front pricing before you walk into a dealership. We recommend the following free services; Car Clearance Deals, NADAguides, CarsDirect & Motortrend.
These free services will offer you the lowest prices and supply you with multiple competing price quotes. You will know the best price before you visit the dealer.

GM has positioned the GMC Sierra as a slightly more upscale pickup truck than the rest of the cars in that category, and that is reflected in the trim levels that offer the most on the Sierra. Both the SLT and the Denali trim have that upscale ambiance and a deep assortment of features that make them feel like more than just regular run-of-the-mill trucks. If you’ve chosen the Sierra over its many competitors, it is most likely because of something that one of those trim levels offers.

The base Sierra SLT with the Enhanced Driver Alert Package is among our top picks for maximizing the value of this model, as it comes with a nice interior and the active safety equipment is very helpful when navigating this large car. The Denali also gets a nod thanks to its high-end appointments, and the base Sierra also has a few nice extras over its rival work truck models.

The SLE trim can also be a decent choice, but it doesn’t leverage the competitive strengths of the Sierra quite the same way the other trims do.

Save Money on a 2018 GMC Sierra:
Are you Shopping for a New Vehicle? Find the Best Deals with "Free - No Hassle" Prices Quotes.