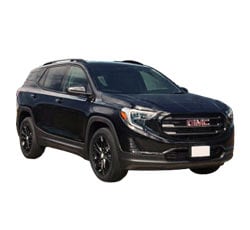 What 2019 GMC Terrain Trim Should you Buy? What is the Difference Between Trims?

With today’s small crossover segment being so crowded, automakers can’t risk falling too far behind the competition. Mechanically similar to the Chevrolet Equinox, the 2019 GMC Terrain continues to climb towards to the top of the segment. Not only does the new Terrain provide a comfortable environment for families, but it also has the ability to deliver impressive fuel savings. Many car critics rave about this SUV’s fresh exterior styling, which was recently updated last year.

Only a few updated were made to the 2019 GMC Terrain. To promote improved visibility in parking areas, GMC has introduced a new HD rearview camera. A couple of new appearance packages have arrived as well.

With a total of four available trims in its lineup, the 2019 GMC Terrain seeks to make it a bit easier for buyers to make a decision. However, a long list of options are offered. Let’s take a closer look at the differences between each trim.

Compare the 2019 GMC Terrain SL vs SLE - What is the difference?

With a competitive starting price of $25,000, the base Terrain SL will appeal to bargain hunters. Most people are surprised by how much value it brings to the table. Powering the Terrain SL is a small 1.5-liter, four-cylinder engine. Its 170-horsepower production is enough to satisfy the needs of the average driver. A nine-speed automatic gearbox pushes the power to the front wheels. Opt for the all-wheel-drive system if you plan to drive in the snow. Trailing equipment is optional as well.

While the base Terrain SL may not look as exciting as the upper trims, it still has an attractive appearance. Instead of saving money by installing cheap hubcaps, GMC equips the Terrain SL with a good-looking set of 17-inch alloy wheels. While the heated mirrors don’t impact styling, they will come in handy during the winter. Privacy glass comes standard as well. Unfortunately, GMC only offers the base Terrain SL in a total of three colors.

Like the rest of the lineup, the base Terrain SL is designed to comfortably haul around up to five people. While the height-adjustable front seats aren’t powered, they’ll get the job done. GMC equips the base Terrain SL with a number of family-friendly features. Front and rear 110-volt power outlets enable passengers to plug in small electronic devices such as laptops. Everyone in your family will appreciate the standard 4G Wi-Fi hot spot, which is usually an expensive option on most of the competition. A total of four USB ports are also found inside the base Terrain SL.

This base model boasts plenty of high-tech goodies. Apple CarPlay and Android Auto make the standard 7.0-inch touch screen easy to link to your smartphone. Meanwhile, a six-speaker sound system with satellite radio helps keep you entertained. Some of the other highlights include Bluetooth streaming and keyless entry.

Unfortunately, advanced driving aids aren’t available for the 2019 GMC Terrain SL. On the bright side, you will benefit from a standard backup camera and automatic headlights. An OnStar communications system allows you to contact emergency personnel at the touch of a button. Teen Driver technology also comes standard, which enables parents to keep a closer eye on their teenage driver.

The Terrain SLE is priced $3,000 higher than the base Terrain SL. Its exterior styling and powertrain are the same. You only get a few interior upgrades, including a spare tire and an auto-dimming rearview mirrors. If you don’t care about these features, save your money by sticking with base model.

Although the Terrain SLE isn’t a big upgrade over the base model, it does open the door for you to get some nice options. The Driver Convenience package better prepares you for the winter by adding heated front seats and remote engine start. Along with the package also comes dual-zone automatic climate control and a power driver’s seat. Some buyers will be interested in the SLE trim’s Infotainment I package, which brings a new HD rearview camera and an upgraded 8.0-inch touch screen with navigation. Extra USB ports in the center console are included.

In comparison to the base Terrain SL, the Terrain SLE gives you two additional engines to choose from. A lot of drivers are expected to opt for the more potent 2.0-liter, turbocharged four-cylinder engine. It raises the performance meter by pushing out a more exciting 252 horsepower and 260 pound-feet of torque. A six-speed automatic transmission handles the shifting duties. Along with the extra power under the hood come dual exhaust tips and bigger brakes. You can also get the Terrain SLE with a turbocharged diesel engine, which provides the best fuel economy in the lineup.

For drivers who aren’t satisfied with the Terrain SLE’s exterior styling, GMC offers a cool appearance package. Featuring a unique set of 19-inch black wheels and darkened exterior trim, the Black Edition package promises to cause onlookers to take a second glance.

Compare the 2019 Terrain SLE vs SLT Trims. What is the difference?

Stepping up to the GMC Terrain SLT enables you to experience a bit more luxury. Unlike the lower trims, its interior is covered with leather upholstery. While navigation doesn’t come standard, you will receive the Driver Convenience and Infotainment I packages. A pricier Infotainment II package adds navigation and a more exciting Bose stereo system.

A Preferred package is also among the Terrain SLT’s list of options. The hands-free and programmable power tailgate helps with loading cargo. A power passenger seat and a heated steering are included. GMC continues to offer the stylish Black Edition appearance package on the Terrain SLT. However, the SLT trim’s available Chrome package satisfies the drivers who desire a flashier look.

Compare the Terrain SLT vs Denali - What is the difference?

Topping the Terrain lineup is the plush Denali trim. It comes loaded with virtually all of the features available on the SLT trim. However, the Driver Alert II package remains an option. Only one power source is available for the Terrain Denali, which is the more powerful 2.0-liter engine.

As soon as you climb behind the wheel, you’ll notice the Terrain Denali’s premium interior materials. However, an available Comfort package further elevates the Denali trim’s luxuriousness with ventilated front seats and heated rear seats. Wireless smartphone charging is another perk that comes with the Comfort package. Some Terrain Denali buyers will be interested in the Advanced Safety package’s upgrades. While the 360-degree camera provides a better view of your surroundings, an automated parking system helps steer you into parking spaces.

When checking out the Terrain Denali, you will not be able to ignore its more upscale styling. LED headlamps and a breathtaking set of 19-inch alloy wheels come standard.

Which One Should You Choose?

When stacked up against rival base models, the Terrain SL proves to be one of the top values. It comes loaded with class-exclusive features, including 4G Wi-Fi connectivity and Teen Driver technology. Although the Terrain SL is not the quickest model in the class, it will reward you with good fuel economy. This is a highly recommended trim for the buyers who need to keep their monthly payments as low as possible.

Without any options added, the Terrain SLE trim is not a better choice than the base Terrain SL. However, there’s a long list of available upgrades for the Terrain SLE. While the Driver Alert I package provides valuable safety technologies, the Black Edition appearance package transforms the Terrain into a sharper-looking ride. Keep in mind that some of the available options will cause the SUV’s cost to rise significantly, including the available engine upgrades.

The leather-lined SLT trim is a notch above the SLE trim. Popular options, such as the Bose sound system and more advanced Driver Alert II package, make it a worthwhile choice.

Drivers seeking all of the available niceties will want the range-topping Denali trim. While the Terrain Denali starts at slightly less than $38,000, adding the available options can easily take its total cost past the $40,000 mark. Don’t hesitate to get the $450 Comfort package, which adds ventilated front seats and heated seat cushions for your passengers riding in the back.

Rated to return a combined 28 mpg, the base turbocharged four-cylinder engine prioritizes fuel economy over performance. GMC also tuned the nine-speed automatic transmission to conserve gas. This means the SUV’s acceleration will be a bit slow in certain driving situations. You’ll find the larger 2.0-liter engine to be far more entertaining. It gives the Terrain eager acceleration while returning a combined 24 mpg. With the ability to deliver up to 39 mpg on the highway, the diesel-powered Terrain will clearly save you the most money at the pump.

Aside from the base Terrain, all of the other trims offer advanced safety technologies. The available forward collision warning system allows you to adjust its sensitivity. It’s definitely a feature you’ll appreciate in the long run. Blind-spot monitoring and GM’s Safety Alert Seat also work well in traffic. While lane-keep assist is offered, it can be a bit too intrusive at times.

Save Money on a 2019 GMC Terrain:
Find New Car Clearance Prices - Many Vehicles are Selling Below Dealer Invoice Prices.

Every dealer offers a secret price. Many prices are below invoice. Find yours here.
2019 GMC Trim Level Buying Guides: