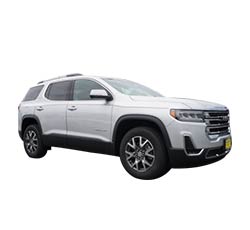 Should You Buy a 2020 GMC Acadia? Here Are Some Reasons For and Against

There have been a variety of SUVs that have tried to go against the grain in recent years, with being to varying degrees of success. One of the most notable ranges that have done so has been GMC’s Acadia, which received a smaller edition in 2017 when many other SUVs were getting larger.

This size is something that can also be seen with the 2020 GMC Acadia, although there have been several upgrades in the intervening years, and the vehicle has gotten steadily larger. While this would lead many to assume that the vehicle’s limited space would be a drawback, what it does with this space makes it an attractive option.

The majority of this can be seen in a comfortable interior, infotainment features, a refined driving performance, and much more. There are a few areas where the 2020 GMC Acadia improves on its previous generations while standing out from the competition.

While there a few reasons why the 2020 GMC Acadia can be an attractive choice of SUV, there are also a few drawbacks. To determine whether it’s worth a purchase, it’s worth looking at the vehicle more in-depth.

One of the biggest changes in the GMC Acadia’s history came in 2017, with its second generation. This brought with it quite a large number of changes, with the most notable being a size reduction.

Since then, the manufacturer has mainly looked at refining the changes that were implemented, so you shouldn’t see too large of a difference with the 2020 GMC Acadia. However, the tweaks and improvements that have been made make quite a large impact.

While many of these changes have been focused on the interior and infotainment features that are available, there have also been a few in its exterior. The more prominent of these should be the color options, wheel sizes, and a variety of other cosmetic changes.

There’s quite a significant number of reasons to choose a 2020 GMC Acadia, although many people may not know where to start looking. There are a few highlights to the SUV.

While the base 2020 GMC Acadia doesn’t have a large amount of power going for it, it does offer quite a significant amount of handling. Though there is the drawback of not being able to feel the roads as much, the steering is much lighter than you may think.

This driving performance can be seen regardless of whether you’re off-roading or in the city, with this varying depending on which trim level you purchase.

One of the notable things about the new GMC Acadia is that it has two different driver alert packages, with both of these providing a variety of benefits. While these may be limited to specific trim levels, they do offer quite a large number of safety features, which is something that many people will want to look at.

Speaking of packages, the technology option for the new GMC Acadia is something that could provide a host of benefits. Though this is limited to a few specific trims, it’s something that should be considered by people who are already aiming for the high-end levels.

There are quite a large number of features that are added to the vehicle with the package. Based on what’s included, many people would expect to pay much more for it. However, this isn’t the case, making this quite an affordable, and cost-effective, option.

Though the 2020 GMC Acadia isn’t the largest SUV you can purchase, it certainly isn’t the smallest. Despite this size, however, it handles much better than many people may expect. Much of this will be seen in the secure feeling that many people should notice when making turns.

Though the SUV may tend to lean wide while it’s making a turn, this is something that’s seen across the majority of vehicles in its class. Alongside this is the fact that you should feel much less body roll when compared to many other SUVs.

Braking is something that every SUV needs to do well. Though the majority of them manage to do so, there’s quite a difference from one to another. Most of these will be seen in whether or not the braking feels secure enough for the SUV.

Though many in the class may not live up to this, the GMC Acadia does, which is something that should put the majority of people’s minds at ease.

Though the majority of buyers will opt for the standard four-cylinder engine, there’s also a V6 alternative that many people might want to take advantage of. There are quite a significant number of improvements here when compared to the base engine, with the most obvious being in its power.

However, there this shines is with its acceleration, which is not only quick but quite smooth when going 0 to 60mph. The upgrade also makes the engine one of the more powerful of its class, which is something that many people may want to capitalize on.

One of the primary benefits of many SUVs is their ride quality, although there can be a significant difference between various ranges. The 2020 GMC Acadia is one of the better available options in this regard, as drivers shouldn’t have to worry about much noise or any bumps.

When it comes to the engine, it should be almost inaudible, which is something that many people will appreciate. These advantages should be better seen with the higher-end trims, as they feature larger wheels with more shock absorption.

The majority of SUV manufacturers try to add as many technological features as they can into their vehicles. However, this isn’t always a benefit as these can often be challenging to understand and use.

However, the 2020 Acadia doesn’t suffer from this, as its infotainment and other features are quite user-friendly. This is further enhanced by the fact that a touchscreen interface will bring up your most-used features, making them easier to access.

Each of the icons have also been enlarged, so they’ll be quite easy to identify and read.

Though only available with certain trims, the All-Terrain Package is something that can come highly recommended, and which provides a variety of benefits. Not only does this include the V6 engine, but also several other performance enhancements.

For people looking for an extra bit of power, this is something that should be capitalized on. This is especially true for anybody looking to do some off-roading, with the upgrade almost proving essential.

There are also a few tweaks to the vehicle’s exterior, making it look somewhat sportier.

The majority of SUVs come with climate control, although these can be hit-or-miss in terms of quality. However, the new GMC Acadia is one of the better choices for climate control, with this being primarily seen in a tri-zone control system.

While this comes as standard, many people will also be able to opt for dual-zone climate control, with the choice between the two being quite helpful. With various fan speeds, this is something that almost everybody should be able to enjoy.
Buying Tip: To avoid overpaying on a new car, shop prices online first. Get up front pricing before you walk into a dealership. We recommend the following free services; Car Clearance Deals, NADAguides, CarsDirect & Motortrend.
These free services will offer you the lowest prices and supply you with multiple competing price quotes. You will know the best price before you visit the dealer.

While the 2020 GMC Acadia has a few notable benefits, like many other cars, there are a few drawbacks to it. While many of these mightn’t be too large, they may sway your decision if you’re considering buying one.

One of the most notable drawbacks of the GMC Acadia is that it lacks storage for many small items. While there is enough for one or two, the majority of drivers should see that there’s quite a limited amount of space for things such as phones.

While this can predominantly be seen in the back rows, it can also be seen in the front, so the majority of people will have to find an alternate way of storing their items while traveling.

Item storage isn’t the only important area where the 2020 GMC Acadia lacks, as there is quite a notable lack of storage. While this will primarily be seen with the third seat row up, it’s something that many people may consider to be a negative, especially given the SUV’s size.

Even with the third row down, there isn’t as much cargo storage as many people will want.

There seems to be several issues with the back row regardless of whether it’s up or down. As there’s a lack of space in this area, the row can feel quite cramped. With the option of having an extra few seats may seem as though it’s an advantage, it may not be as beneficial in real life.

Many drivers will want to know how the 2020 GMC Acadia steps up when compared to other vehicles. One of the SUV’s largest contenders could be the Chevrolet Traverse, primarily because both SUVs suffer from the same drawbacks while offering many of the same benefits.

While the Traverse does have a variety of advantages in this comparison, the GMC Spark does seem as though it’s the much more cost-effective option. This is especially true when you factor in many of the higher trim levels.

The Ford Explorer may be considered competition here, as the two ranges have often been compared in a variety of ways. While the Explorer does offer more engine power and extra comfort, the 2020 GMC Acadia comes ahead with its safety features, among other factors.

There are a few reasons why the new GMC Acadia stands out from much of its competition. However, where the SUV really shines is with its ride quality and overall performance. While you’ll be sacrificing slightly on power, you’ll see much better handling and versatility.

If you’re willing to overlook the limited storage options because of the 2020 GMC Acadia’s size, then it could be a recommended purchase.

Save Money on a 2020 GMC Acadia:
Are you Shopping for a New Vehicle? Find the Best Deals with "Free - No Hassle" Prices Quotes.