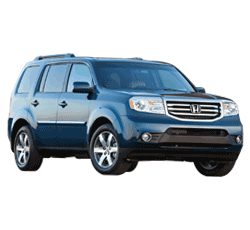 With an impeccable safety rating and space for eight passengers, it's no wonder that the 2014 Honda Pilot has been named one of Kelley Blue Book's top 12 family cars for 2014. If you're in the market for a large SUV, read on for the top ten reasons to consider Honda's flagship sports utility vehicle (and a few notes on why you may want to go in a different direction). First introduced in 2002, the SUV is currently in its second generation, with a full redesign dating back to 2009. While there are no changes to the 2014 Honda Pilot since last model year, a full redesign is planned for 2015. [ For the 2015 model see - Honda Pilot Pros and Cons ]

1. Tons of Space
The Pilot is one of the few vehicles in its class that fits eight passengers--most other SUVs of this size are designed to fit seven. In addition to passenger space, the SUV has an incredible amount of cargo space, meaning you'll be ready to tote your kids, their friends, and their sporting equipment all weekend long. The console opens to reveal a huge storage space with dividers that can be arranged to fit everything you want to have close at hand when you're on the road. And if you need to take along even more than what fits in the Pilot, you can tow up to 2,000 pounds (4,500 pounds for the all-wheel drive model).

2. Safety
Honda has long been considered one of the safest car manufacturers on the market, and the Pilot is no exception. It received good ratings in several categories from the Insurance Institute on Highway Safety. Safety features include traction control, stability control, antilock brakes, front, side, and side curtain airbags, and rear parking sensor.

3. Fuel Economy
While large, three-row sports utility vehicles are not typically judged on fuel economy, the Pilot will be a pleasant surprise if you're concerned about gas prices while you're driving your family around. It gets 18/25 mpg city/highway, which is impressive among other vehicles in this class.

4. Mid-Sized on the Outside
Despite the ample space it offers, the Honda Pilot has a much smaller footprint than you'd expect, making it an ideal choice for city drivers who need an SUV. The minimal exterior makes it easy to maneuver and park the Pilot.

5. Reliability
Honda's name has long been synonymous with quality and long-lasting vehicles, and the Pilot is no exception. The SUV is rated 3 out of 5 on reliability from J.D. Power and Associations, with a five star rating for features and accessories. Honda also has one of the lowest costs of ownership in the American car market.

6. Versatile Interior
The third-row seat folds down to allow plenty of room for cargo; this space is accessible by an unusually low rear gate which makes the car easy to load. Many baskets and nets make it easy to keep the car clean and organized, while the console features are easy to use and well-placed.

7. Excellent Handling
If you aren't used to driving such a large vehicle, don't worry. Driving the Pilot is comparable in comfort and handling to a large sedan. The steering and suspension are designed to provide a smooth ride even on tight curves, with plenty of comfort that shields you and your passengers from road bumps. And while this probably won't be the most powerful vehicle you ever drive, the standard 3.5-liter V6 engine provides an impressive 250 horsepower.

8. Lots of Room for Child Safety Seats
If you're considering the Pilot, chances are that you have at least two children. You'll be happy to learn that there are three LATCH locations for child safety seats, which is extremely rare. In addition, the second row is so spacious that a full-grown adult can fit between two child seats.

9. Available 4-Wheel Drive
The Pilot is available with an optional Variable Torque Management 4-Wheel Drive System, which improves handling even in mud, snow, and ice. It also has a lock function that helps you pull out of a tough situation if you get stuck.

10. Value
In addition to Honda's low cost of ownership, the Pilot is one of the best SUVs of this size for the money. While similar models have more features and a more stylish design, they are also substantially more expensive. Value doesn't mean cheap, however; the car's materials are good quality and even luxurious on the higher trim levels.

While the Honda Pilot's overall package and appeal make it a great choice, there are a few areas that are lacking compared to other vehicles in its class. If any of these items are high on your list, you may consider looking elsewhere.

1. Technology
Because it hasn't been updated in several years, the Pilot is lacking a few key tech features that are standard or optional in most similar vehicles. It's not available with blind-spot detection or collision warning, safety features that you might be looking for. Bluetooth is not standard in the base model, and options packages are more expensive than might be expected. Keyless ignition/entry or second-row captain's chairs are other common features that have been left off the Pilot's list.

2. Style
The Pilot is strictly utilitarian. While it's well designed both inside and out, it won't be winning any awards for a sharp look and feel. The exterior is quite boxy, while the interior has some cheap-feeling details and a strange color screen/black-and-white LCD screen combo screen. Still, if you prefer efficiency to style, the Pilot is a great, utilitarian and easy-to-use choice, with an ergonomic design that is comfortable for both driver and passengers.

Despite these flaws, the Pilot is an excellent family vehicle that starts at a reasonable price of $29,670, and should absolutely be considered if you're looking for a large SUV at a great value without frills.
2018 Honda Pilot Trim Buying Guide:

• 2018 Honda Pilot trim levels. What you get with each trim configuration.