2015 Honda Accord Pros vs Cons. Should You Buy? 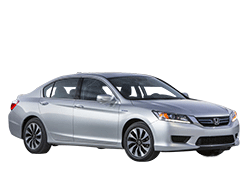 Should You Buy a 2015 Honda Accord? Here Are Some Reasons For and Against

Over the years, the Honda Accord has remained one of the most popular sedans on the market. From college students to business executives, they can all be seen cruising around town in a Honda Accord. Unsurprisingly, the 2015 Honda Accord has been receiving rave reviews from several automotive experts. Although the new Accord deserves much praise, the competition is still very fierce.

Very few vehicles can match the overall reliability of a Honda Accord. With the proper maintenance, most Honda engines have a lifespan of at least 300,000 miles. This is one of the reasons why the Honda Accord maintains its value better than the Kia Optima and the Chrysler 200 sedan. The Accord’s strong reliability rating certainly comes in handy for the drivers who must commute on a daily basis.

Although the 2015 Honda Accord is considered a mid-size sedan, the available legroom is comparable to many full-sized sedans. With a trunk that offers nearly 15 feet of available cargo room, the Accord proves to be a very capable hauler. The sedan’s adjustable driver’s seat enables a variety of different sized drivers to fit comfortably.

The base power source in the 2015 Honda Accord is a 2.4-liter, four-cylinder engine. With the use of Honda’s legendary i-VTEC technology, the lively motor can pump out an impressive 185 horsepower. However, the Sport model’s tuned exhaust system increases the total output to 189 ponies. The four-cylinder Accord's power output trumps the Toyota Camry.

Motorists who desire a more powerful performance can upgrade to the mighty V-6 engine. The 278-horsepower engine gives the Accord plenty of muscle in all driving situations. During testing, the V-6 Accord was able to sprint to 60 mph in only six seconds. In an effort to enhance the engine’s fuel efficiency, it has been designed with a Variable Cylinder Management system.

All the versions of the new 2015 Accord now come standard with a rear-view camera system. Some of the other standard goodies include Bluetooth connectivity, an air filtration system, and a 160-watt sound system. Drivers will also find the push-button ignition system to be extremely convenient. Some of the options include a sunroof, an auto-dimming rear-view mirror, and a satellite-linked navigation system.

The 2015 Honda Accord is available with several safety upgrades. The available LED headlights effectively enhance the driver’s visibility at night. Honda’s LaneWatch blind-spot detection system is a must for traveling on busy highways. The sedan is also available with a forward collision warning feature.

The starting price for a base 2015 Accord is about $22,105. This price tag is over $1,000 less than a base Toyota Camry. The Accord Sport model is a very affordable alternative to some of the more expensive sport sedans on the market. Although the top-of-the-line Touring model costs around $33,630, it packs a variety of top-rate luxury features such as a high-resolution display and heated seats.

The Honda Accord has been engineered to maintain a comfortable ride quality without sacrificing handling. The well-designed suspension setup stays composed even when traveling on rough pavement. During comparison testing, many drivers favored the Accord’s responsive handling over the Camry and Subaru Legacy.

The 2015 Honda Accord is strictly a front-wheel drive vehicle. This can pose a potential problem for the drivers who live in areas that are accustomed to harsh winters. Traditionally, all-wheel drive vehicles offer better handling on snowy roadways. However, keep in mind that the Honda Accord does come equipped with a Vehicle Stability Assist system that enhances traction in wet weather.

According to automotive experts, the 2015 Accord is poised to remain a best-seller. While this is good news for the Honda dealerships, it can be a problem for the drivers who prefer to stand out from the crowd. The streets are flooded with thousands of Accords that look nearly identical.

Unfortunately, buyers will not be able to equip their V-6 Accord with a manual gearbox. The good news is that the six-speed automatic transmission is designed with a drive-by-wire throttle system. This allows the transmission to respond immediately when pressing on the gas pedal.

Although the competition has improved dramatically, the 2015 Accord is still one of the best sedans. While many automakers have started to use turbocharged engines, the Accord's naturally-aspirated engines are able to compete in terms of fuel efficiency and performance. All of the most popular creature comforts are also available on the new Accord.