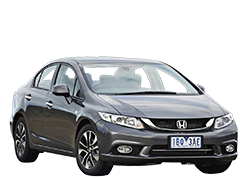 Should You Buy a 2015 Honda Civic? Here Are Some Reasons For and Against

Which features does the 2015 Honda Civic Sedan embody? What might be the pros and cons of this popular sedan model? How does the 2015 Civic fare in comparison to other cars?

For anyone looking to answer any of these questions, it is imperative to gain an overall perspective of the 2015 Civic. This means that in order to make an informed decision about investing in the Civic Sedan or weighing its strengths and weaknesses, potential buyers need to consider how it has been deemed in test runs.

As one of the top selling Honda models, there are a number of upsides to buying the 2015 Honda Civic Sedan, including:

The smartphone technology gives you the option of activating voice to read your text messages aloud. With an average of one in four car accidents being caused due to cellphone usage (National Safety Council, 2014), this option can prove to be extremely useful in preventing accidents. Voice-activated messages can ensure that individuals are free of cellphone distractions and completely focused on driving safe.

Even the most skilled drivers can feel challenged by blind spots. This year’s 2015 Honda Civic Sedan features a special camera for blind spots that utilizes Honda’s LaneWatch technology. Additionally, to help with backing up, multiple angle rearview cameras provide a great view.

With the features it packs along with the smooth drive, this sedan design by Honda is among the most affordable cars of its category. The price range of 2015’s sedan Honda Civic starts with a modest $18,490 and go up to $24,340, making it an economical choice for a new car.

LX, which is the most basic version of the 2015 Honda Civic, comes with a manual transmission with the option to switch to continuous variable transmission (CVT). All the other Civic types contain CVT. In this way, people can opt for the transmission type they are most comfortable with, and that best fits in their budget.

Honda brought in CVT in order to replace the outdated five-speed gear system. This means that drivers no longer have to keep shuffling gears while driving, leading to a much smoother and jerk-free car ride.

After earning rave reviews for introducing CVT in the 2014 Civic, Honda wisely maintains the feature in the 2015 model as well. The inclusion of CVT accounts for better fuel efficiency, the numbers of which are estimated to be:

Another place where the 2015 Honda Civic scores major points are the way it boasts of a much enhanced infotainment system. The 7-inch wide audio display is marked by the new touch screen feature. By integrating smartphones, passengers can easily log on to the Internet while driving and add variety to their music list by syncing to Pandora.

Remember the days when the driver would be scrambling with the air conditioning just to get the perfect temperature inside the car? The new Honda Civic will make everyone forget those days ever existed. All passengers need to do is to set their preferred temperature and the car’s climate control will adjust itself accordingly.

For the lovers of high velocity drives, all automatic models of 2015 Civic feature the Sport mode. As can be guessed by its name, the Sport option allows drivers maintain higher revolutions and go full throttle with their acceleration. This leads the car to respond even to the slightest of movements by the drivers, helping them driver with greater ease.

The paddle shifters have been included in the automatic Honda Civic in conjunction with the Sport mode. When using the paddle shifters, the CVT is handled like a seven-gear mechanism, except that the transition between these supposed gears is much faster.

Reasons Not to Buy a Honda Civic – The Cons

With the large number of advantages offered by the 2015 Honda Civic, there are some drawbacks to consider as well, some of which are:

While the popularity of the 2014 model must have been inspiring for Honda, it does come as a bit of disappointment that the company did not make any noticeable changes in the 2015 Civic. This means that anyone who already owns the 2014 design does not have anything innovative to expect this year.

One of the biggest criticisms on the 2015 Civic is the rather small storage space it offers for cargo and luggage, which means that it may not be the best option for road trips.

The passengers sitting at the back may complain of an uncomfortable ride due to limited leg space.

Here is how the 2015 Honda Civic holds up in comparison with its competitors:

• Rearview camera – This practical feature, which distinguishes the 2015 Civic, is completely missing from the Corolla and is optional in the Cruze.

Considering its pros, cons and performance in front of its competitors, it can be said beyond a doubt that this year’s Honda Civic offers greater value for money than any of its previous models. Additionally, the car also has a good resale value, which makes it a wise choice in terms of investment as well.