2015 Honda Odyssey Pros vs Cons. Should You Buy? 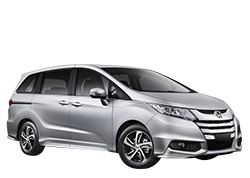 Should You Buy a 2015 Honda Odyssey? Here Are Some Reasons For and Against

The Honda Odyssey began as a hatchback in the nineties, but has quickly evolved into of the most popular minivans in the country. Why do people buy the Odyssey? More important, why should people buy the new 2015 Odyssey? Here are ten reasons to buy this minivan... and a few reasons why maybe you shouldn't.

1) Safety Measures
Minivans are built to carry precious cargo: children. As such, the renowned safety of the Honda Odyssey is the top reason to buy it. This minivan has been consistently ranked as one of the safest vehicles on the road, and Honda adds to the safety features with every update. All Honda Odysseys come with:

The lane departure warning is a particularly useful new feature that warns drivers when they begin to change lanes without a turning signal, preventing accidents from unintentional swerving. These features are standard in all models. The higher end models include even more safety features such as the blind spot information system.

2) Fuel Efficiency
At 28 miles per gallon on the freeway, the 2015 Honda Odyssey is a clear winner for people who are frustrated by high gas prices. Minivans are large and heavy, but also increasingly efficient ways to move large groups of people. The Honda Odyssey remains a front-runner in fuel economy.

3) Reliable performance.
Let's face it: all the bells and whistles make no difference if the vehicle does not run well. The 2015 Honda Odyssey has been commended for excellent handling and general driveability. The high horsepower engines allow fast acceleration and good handling on almost any terrain. This is especially important considering that minivans are large and also likely to be carrying a lot of people and cargo.

4) Designed for Comfort.
Honda's upgraded 2015 Odyssey interior is designed for comfort. A variety of seating configurations are available so that buyers can get the exact interior that meets their needs. In addition, the updated arm rests are softer, and the second row seats can be adjusted to be wider.

5) Entertainment.
Gone are the days of children complaining on car rides. The 2015 Honda Odyssey is designed to keep passengers of all ages entertained. The rear entertainment center comes with a 16.2 inch screen that can be used as a split screen, allowing passengers to watch two different shows. The system has HDMI, which means it can be hooked up to gaming systems and DVD or Bluray players. Passengers can even listen to the media system via their Bluetooth devices.

For older passengers, the new Honda Odyssey comes with HondaLink, a minivan internet system that allows access to social media, news feeds, and internet radio. All 2015 Odysseys are compatible with Pandora internet radio, and HD radio is a standard feature on some models.

In addition, the driver has access to hands-free calling and even a text reading service.

6) The Display.
Minivan displays have been improving, but the display of the 2015 Honda Odyssey is worthy of the Starship Enterprise. This intuitive control center allows the driver and front seat passenger to quickly and efficiently control most of the van's systems on an 8 inch display. You can look at files from a USB device, check out the latest options on internet radio, and check on the performance of the van on one simple display.

7) No More Blind Spots.
The 2015 Honda Odyssey Touring Elite model comes with a Blind Spot Information System (BSI). The BSI lets you know when there is a driver in your blind spot by gathering information from two hidden sensors at the back of the van.

8) Space.
One of the major benefits (or drawbacks, depending on your perspective) of the 2015 Honda Odyssey is that it is huge. Models can be bought with seating for up to eight people, plus space for all of their stuff. Honda also allows customers a variety of options for cargo space. The second and third row seats can be folded down or removed for those times when you need even more cargo room.

9) Style.
While many brands are designing increasingly boxy minivans, the 2015 Honda Odyssey is actually sleek and sporty. It has a modern look that stands out among this year's minivans.

10) Cleanliness.
Minivans are always clean when you buy them, but your Honda Odyssey will be clean months and years later. How? The HondaVAC system. This built-in Shopvac system is stored at the back of the minivan but designed to reach throughout the interior. It comes with an removable and emptyable canister as well as a replaceable filter. The system can be used whether the vehicle is on or off, allowing quick clean-ups at any time.

1) Size.
The cargo space and passenger room come with a cost. This is one of the largest minivans on the market.

2) Cost.
The 2015 Honda Odyssey joins previous models in being more expensive than most comparable minivan models from other car brands. It's important to remember, however, that Hondas in general hold value better than vehicles from other makers.

These seats are comparable to driver and front passenger seats in other minivans. This means they are comfortable, but also that they take up a lot of space, are heavy, and can be difficult to remove unless you have a strong person to do it.

How the 2015 Honda Odyssey stacks up to the competition:

The Honda Odyssey has both advantages and disadvantages, but there is a reason it is consistently ranked the best minivan. With great fuel mileage, comfortable seating, and built-in entertainment, this is the ultimate minivan for road trips or a drive around the block.