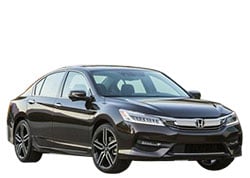 Should You Buy a 2016 Honda Accord Sedan? Here are the Pros and Cons

Throughout 2015, it is estimated that more Americans had a Honda Accord parked in their driveway compared to any other type of car. For the 2016 model year, the Honda Accord is keeping in the headline, as it is receiving several significant revisions and additions.

The new 2016 Honda Accord Sedan changes range from suspension tuning revision to a technology interface that has been enhanced to supports Apple CarPlay as well as facilitating the integration of Android Auto smartphone features.

When you add these latest upgrades to a Honda Accord sedan car already rated “A” by Edmunds what you get is one of the leading family cars available on the US market today.

The majority of test drivers are convinced that the 2016 Honda Accord Sedan gives a fairly decent performance, credit to its powerful, great handling and responsive CVT.

When you are out on the highway:

Automaker Honda has updated the suspension and steering of the 2016 Honda Accord Sedan. Test drivers have reported that it now delivers good handling and a composed ride.

In general, the 2016 Honda Accord Sedan feels more natural and even calmer to drive than previously.

Lots of test drivers have expressed their satisfaction with the 2016 Honda Accord Sedan's spacious seats, top-notch materials and stylish cabin.

Overall, the design is elegant, and the tight construction of the cabin gives a more powerful impression than you would be expecting from a regular family car.

The infotainment system of the Accord got an update for 2016. Some of the new features include Android Auto and Apple CarPlay.

The 2016 Honda Accord Sedan comes with a trunk that is bigger-than-average for the vehicle class.

Critics have noted that the rear seat 60/40 split-folding makes the trunk of the Accord more versatile than during the earlier years.

According to auto reviewers, you will get decent support and comfort from the front seats of the 2016 Honda Accord Sedan.

The backseat of the sedan has been rated as one of the finest in the class, mainly due to its balanced mix of comfort and space.

When you check out the crash-test ratings for the 2016 Honda Accord Sedan, it becomes pretty clear that this is a car that is very safe.

Except for frontal-impact protection where the Accord received 4-star ratings out of 5 from the Federal Government, this car has earned top marks in all other tests carried out by IIHS and the NHTSA.

Being a new car, not enough data has been gathered regarding reliability for this vehicle.

The majority of Honda Accord buyers typically end up going to the 4-cylinder engine, and in this; they are not going to be disappointed.

The 2016 Honda Accord has managed to strike an almost perfect balance between handling and a supple ride.

Reasons Not to Buy a 2016 Honda Accord Sedan – The Cons

Some critics have indicated that the 2016 Honda Accord Sedan is not very engaging when you are driving, especially when compared to some competitors. The optional 6-speed automatic transmission has been said to shift too leisurely.

Although efficient and refined, the 4-cylinder 2016 Honda Accord engine may not match the power of V6 regarding satisfying the whims of a keen driver. It lacks the final punch.

Several auto critics think the touch-screen 2016 Honda controls are somewhat more challenging to use than the base model physical buttons.

Although the trunk of the 2016 Acord is quite wide at the rear, somehow, it tends to narrow down considerably as you move forward between the vehicles wheelhouses. Effectively this limits your loading flexibility and cargo capacity.

Auto reviews have compared the 2016 Honda Accord with the Mazda Mazda6 and the Ford Fusion Hybrid 2016 models.

The 2016 Honda Accord Sedan has undergone some updates. This has had the effect of making the already popular family sedan even better in a number of ways. What you will be getting from the 2016 Accord is certainly a terrific automobile.

If you are in the car market for a new midsize family sedan, you are going to love the styling of the new Accord. You will probably also like most of the other aspects and features of this new vehicle. Considering that the 2016 Honda Accord seems to have done nearly everything correct, it will be no big surprise if it deservedly earns a top spot on your vehicle consideration list.

• 2018 Honda Accord trim levels. What you get with each trim configuration.