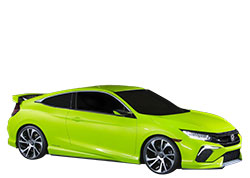 Should You Buy a 2016 Honda Civic Coupe? Here are the Pros and Cons

The Honda Civic is a mainstay among the compact sedans, and the all-new 2016 model continues the car’s proven tradition of reliability and value into what has become its tenth generation. The car’s new exterior gives it the flash and refinement to compete against its more exotic rivals, and a reworked interior is cleaner and more modern. The Coupe model, as previously, is designed as a sportier alternative to the conventional four-door design.

The exterior and the interior of the 2016 Honda Civic Coupe has been completely redesigned inside and outside. Overall, the new generation feels more like an evolution; it builds on what the previous models did right and fixes what they may have done wrong. Among the new additions, however, are advanced high-end features such as the HondaSensing active safety suite.

The new design of the Civic suits the 2016 Honda Civic Coupe perfectly. The tapered rear roof line works perfectly with the larger doors to turn a compact family sedan into a stylish and sporty automobile. The front section, which the car shares with the four-door Civic, has also received a facelift and manages to combine curves and straight lines to create a style both classic and modern.

The updated exterior of the Civic is matched with a new modern interior designed to give the impression of space and refinement. Those who were scared away by the two-shelf dashboard and the 90s science fiction digital displays of the old Civics can rejoice. The new dashboard layout is more traditional and minimalist; it was clearly designed to be easy to use and easy on the eyes.

Most compact cars suffer, by their nature, from cramped conditions for the rear passengers. The 2016 Honda Civic Coupe is an exception. There is plenty of head room and leg room even for the tallest passengers in the back. The long doors make it just as easy to get in and out of the rear seats on the two-door Coupe as on the sedan.

Another common compact car foible not present in the Honda Civic Coupe is the lack of cargo space. The Civic has a 15.1 cubic foot trunk that can easy compete with many mid-size or even full-size sedans. Adding to the utility are the little storage cubbies hidden in the doors and the center armrest.

The 2016 Honda Civic Coupe comes with a standard 2.0-liter engine that is sufficient for most purposed, but the real excitement comes from the 1.5-liter turbocharged engine available on the higher trim levels. It is rated for 174 horsepower and 162 pound-feet of torque and makes the light Civic feel very fast. Those who are looking for an exciting drive should consider it as an option.

The 2016 Honda Civic Coupe is available with two transmissions: a six-speed manual transmission and a continuously variable automatic transmission. The manual is crisp and responsive and gives the drive a feeling of control. The CVT is quiet,  smooth, and does wonders for the car’s mileage.

The Honda Civic Coupe feels light and maneuverable both on the highway and on winding roads. The steering feels very precise and offers good feedback. The suspension keeps the body roll to a minimum even on tough maneuvers.

The 2016 Honda Civic Coupe posts excellent fuel economy numbers thanks to its light weight, efficient engines, and well-engineered transmissions. The Civic gets as much as 31 miles per gallon in the city and 41 miles per gallon on the highway. Breaking the 40-mile-per-gallon mark and getting 35 MPG combined put it at the top of economy-minded buyers’ shopping lists.

With active safety features becoming more and more prevalent, one of the innovations on the 2016 Honda Civic Coupe has been the addition of an active safety suite. HondaSensing combines adaptive cruise control, forward collision warning and emergency braking to create a system that automatically maintains a safe distance to the car in front of you, warns you of possible danger and automatically applies the brakes if you can’t or don’t respond. With this system, Honda aims to finally earn the Civic a Top Safety Pick Plus award from the Insurance Institute for Highway Safety.

The Honda Civic has been around, in one form or another, for almost fifty years. Many automakers take several years to perfect each generation of cars, but Honda is building on decades of experience to get everything perfect right out of the gate. This means less first-model-year jitters and yet more proof of Honda’s well-earned reputation for quality and reliability.
Buying Tip: To avoid overpaying on a new car, shop prices online first. Get up front pricing before you walk into a dealership. We recommend the following free services; Car Clearance Deals, NADAguides, CarsDirect & Motortrend.
These free services will offer you the lowest prices and supply you with multiple competing price quotes. You will know the best price before you visit the dealer.

Reasons Not to Buy a 2016 Honda Civic Coupe – The Cons

The 2016 Honda Civic Coupe is an exciting car full of excellent features, but you have to move up from the base trim level to really see that. The base 2.0-liter engine is best described as ‘sufficient’ and brings little driving excitement. The base model even looks less appealing in terms of interior and exterior styling, so buyers should be prepared to be forced to upgrade.

The Civic’s CVT makes it very fuel efficient, but it puts a damper on the otherwise exciting driving dynamics. It can make the car’s acceleration feel a little sluggish, and there are no paddle shifters or a sport mode to get it to prioritize power over efficiency. It is also standard on higher end models, which means no manual transmission for those who want higher-end features.
Infotainment Controls.

The Honda infotainment system featured on the 2016 Honda Civic Coupe still needs work. Moving all the controls to the touch screen makes the system more intuitive on paper, but it means having to work the touch screen for even basic adjustments like volume control. Those customers not naturally adept with electronics may experience some trouble adjusting to the new system.
How It Stacks Up to the Competition

How it stacks up

The Honda Civic Coupe has competition from other two-door compacts like the Kia Forte Koup and the Volkswagen Golf. The Volkswagen Golf offers more cargo room and horsepower than the Civic, but its manual transmission is quite dated, and the performance of the automatic can be very hit-or-miss. The Kia Forte Koup offers more upscale options like heated rear seats, but its handling and performance are noticeably less exciting that Civics.

The 2016 Honda Civic Coupe is an exciting new evolution of a beloved and well-regarded car. The new exterior and interior design bring it in line with the new innovations in compact sedan design, while new safety features once again demonstrate Honda’s commitment to driver safety. Anyone who enjoyed the previous incarnations of the Civic will feel right at home in this car. Anyone who was put off by some of the design flaws of the previous Civics may find them cured in this iteration.

• 2018 Honda Civic trim levels. What you get with each trim configuration.