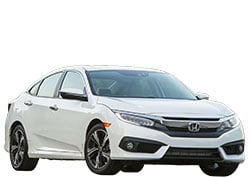 Should You Buy a 2016 Honda Civic Sedan? Here are the Pros and Cons

The Honda Civic is among the best-selling cars in automotive history. For the 2016 model year, Honda chose to completely redesign its popular compact sedan. Not only does the new Civic pack more muscle under the hood, but it also looks noticeably sportier than the previous generation. Families will certainly appreciate the additional amount of legroom in the back. Outstanding crash protection remains one of the car’s strengths.

The 2016 Honda Civic Sedan is all-new. From the suspension system to the engine, virtually every aspect of the car is different.

Drivers are destined to take advantage of the base engine’s extra power. The four-cylinder engine pumps out a satisfying 158 horsepower and 138 pound-feet of torque. As usual, drivers can look forward to getting great gas mileage. When equipped with the CVT, the sedan can deliver an impressive 41 mpg on the highway. However, the manual version is nearly as efficient.

For the first time, Civic buyers in the United States can opt for a turbocharged engine. Honda has tuned the boosted four-cylinder engine to produce 174 horsepower and 162 pound-feet of torque. The turbocharged version can hit 60 mph in a quick 6.8 seconds. Amazingly, gas mileage actually increases to an eco-friendly 42 mpg on the open road.

The 2016 Honda Civic handles great in all driving situations. When tackling a curvy road, the car’s body remains stable and controlled. This should be good news for the drivers who appreciate a nimble automobile. Luckily, the improved handling does not ruin the sedan’s overall ride quality. The new suspension does a good job of absorbing bumps in the road.

There is no overlooking the Civic’s sportier design. An aggressive front fascia and sharp body lines give the 2016 Honda Civic Sedan an edgy appearance. LED daytime running lights and LED taillights come standard. The EX trim’s stylish 16-inch wheels make the sedan look even cooler. Some of the available paint colors include White Orchid, Crystal Black, and Modern Steel.

Families can enjoy a bit more comfort inside of the 2016 Honda Civic Sedan. The amount of rear-seat legroom has increased substantially. Everyone will be able to stretch out their limbs. Trunk space has increased as well. For the families who like taking road trips, the new Civic will be a worthy long-distance cruiser.

Even the base model comes equipped with a significant number of standard features. The rear-view camera enables drivers to quickly pinpoint obstacles. Meanwhile, a five-inch display screen gives the cabin an extra touch of class. Some of the other standard components include a cruise control, Pandora connectivity, a USB port, and Bluetooth technology.

The mid-level EX trim surrounds the driver with a surplus of goodies. An eight-speaker sound system helps make their daily commute a lot more entertaining. New technologies such as Apple CarPlay and Android Auto can also be found on the EX trim. Some of the other cool features include Honda’s nifty LaneWatch camera system, a more advanced trip computer, a touch-screen display, and heated side mirrors.

In the past, the base Civic came equipped with rear drum brakes. Fortunately, that is no longer the case. All versions of the 2016 Honda Civic Sedan come with four-wheel disc brakes. During emergency situations, the Civic should offer impressive stopping power. No longer will buyers of the base model have to compromise any safety.

While the base Civic features a rear-view camera, the higher trim levels are available with more advanced technologies. When attempting to change lanes, the LaneWatch camera will help eliminate blind-spots. Adaptive cruise control can definitely reduce driver fatigue on long trips. Some of the other driving aids consist of an automatic braking system and lane-departure intervention.

Despite the number of improvements made to the 2016 Honda Civic Sedan, it still remains affordable. Prices for the base LX model start at about $18,700. However, the top-of-the-line Touring trim can top out at $25,500.
Buying Tip: To avoid overpaying on a new car, shop prices online first. Get up front pricing before you walk into a dealership. We recommend the following free services; Car Clearance Deals, NADAguides, CarsDirect & Motortrend.
These free services will offer you the lowest prices and supply you with multiple competing price quotes. You will know the best price before you visit the dealer.

Reasons Not to Buy a 2016 Honda Civic Sedan – The Cons

1) No Manual Gearbox for the Turbocharged Models

The turbocharged Civic is only available with a CVT. This may prompt some drivers to stick with the base engine.

2) More Expensive Than Some Rivals

Despite the Civic’s affordability, it is still a tad bit costlier than some of its competition. For example, the Kia Forte’s starting price is $16,000.

3) Some Car Shoppers May Not Like Its New Look

Although the 2016 Honda Civic Sedan has received praise for its new design, some people may not like its edgier styling.

The 2016 Honda Civic Sedan is positioned in a very competitive class. Some of its main rivals include the Kia Forte, the Chevrolet Cruze, and the Toyota Corolla. In terms of sheer performance, the Civic is far quicker than the Toyota Corolla. While the Mazda3 is a fun option, the new Civic offers the most passenger room.

• 2018 Honda Civic trim levels. What you get with each trim configuration.