2018 Honda Odyssey Pros vs Cons. Should You Buy? 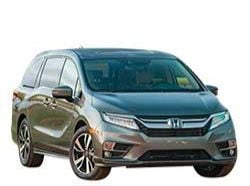 Should You Buy a 2018 Honda Odyssey? Here Are Some Reasons For and Against

The 2018 Honda Odyssey is being hailed as the most family-friendly minivan in the world, and there is no doubt that it is one of the safest and most fun minivans to drive. While frontal visibility on the Odyssey is merely average and the suspension is a little bit firmer than one might prefer on a minivan, the overall ride quality is wonderful. The interior offers a lot of space and comfort, and it is probably one of the safest vehicles on the road, making it a top choice if you have young children.

The Odyssey received a full redesign for the 2018 model year. The van's second-row seats have been largely improved, as have its steering and handling capabilities. A brand new V6 engine option brings a lot of additional power to the vehicle. Additionally, there are plenty of new convenience features to be found on the 2018 Honda Odyssey.

Although you will have to manually move these seats to make the most of your cargo space, the Odyssey's second-row multi-sliding seats recline with ease and don't impinge on legroom for those in the third row. The new inward/outward sliding feature is a nice touch for those who have multiple children trying to get into the second and third rows.

Synonymous with safety, Honda is upping the ante this year by making driver assist and safety features that are usually optional on its competitors the standard for the EX-and-above trims. Also, the LATCH child seat anchors are incredibly easy to reach. Since the seats have a flattened contouring, there is a sufficient amount of room for rear-facing child safety seats.

Honda was once known for having a less-than-user-friendly infotainment system. That has changed for 2018. The new infotainment system is more intuitive and has a crisp 8-inch touchscreen display. Honda has returned to physical knobs for many controls.

Minivans aren't known for power, but the V6 option gives the Odyssey a major power boost. This 3.5-L V6 engine can get you up to speed even when your vehicle is fully loaded with passengers and cargo, making highway driving a breeze.

Looking for quick, precise steering? The 2018 Honda Odyssey has spot-on handling and steering. It keeps to an incredibly straight track on main roads and highways, all while inspiring driver confidence.

The cabin's interior is noticeably quiet, as it has been well-insulated to keep out road and engine noise. Also, since the suspension has been refined, you won't feel all of the bumps you go over on the road. The Elite trim is especially silent, even when going at highway speeds.

To some drivers, the 10-speed might seem excessive. However, this transmission as a swift and smooth shift between gears. Unlike many other minivans, paddle shifters come standard on the Odyssey, which is a nice touch.

It is difficult to find more comfortable seats in a minivan. Honda packs their seats with plenty of padding and lumbar support. Seats are adjustable, and it is relatively easy for drivers of any size to find a comfortable driving position.

The 2018 Honda Odyssey has a surprisingly quick acceleration rate, thanks to its powerful V6 engine. This minivan sprints from 0 to 60 mph in just 6.5 seconds, besting many of its competitors. Passing other vehicles in slow traffic and on highways is a breeze.

It's tough to find a more spacious vehicle, even by minivan standards. There is a grand total of 155.8 cubic feet of space. Even when all seats are in place, there is plenty of cargo room for groceries and other less-bulky items.

Reasons Not to Buy a 2018 Honda Odyssey – The Cons

The second-row seats are not power-operated, and trying to manually maneuver them is a nightmare. If you are a smaller person without much upper body strength, these seats will give you quite a workout. They are also bulky, so getting them out is quite a chore for anyone.

With a maximum of three and minimum of just one, there are simply not enough USB outlets for a minivan full of people. If you want all three jacks, you will have to spend more money and upgrade to the trims with the rear-seat entertainment system.

In addition to the second-row not being power-moving, the third-row seats are not power-folding. This is a minor nuisance for most drivers, and you can get them down manually with relative ease, unlike the second-row.

The Odyssey has some frontal visibility issues. It's very difficult to see the front of the van's hood through the windshield, and headrests in the second-row can be rather obstructive when you need to glance over your shoulder. Shorter drivers might have more difficulty than others.

The 2018 Toyota Sienna physically doesn't look as contemporary as the Odyssey, but its exterior redesign for this year does make it look sportier than before. The Sienna has up to five USB ports, which trumps the Odyssey's maximum of five. However, the engine lacks some of the power of the Odyssey's V6.

Another longstanding favorite is the Chrysler Pacifica. This year's Pacifica looks very contemporary and chic with its redesigned fascia. Unlike the Odyssey, the Pacifica can easily transform into a cargo-hauler with seats that are easy to move. However, these seats lack the spaciousness and comfort of those found in the 2018 Honda Odyssey. It should also be mentioned that the 9-speed transmission lacks the effortless shifting found on the Odyssey's remarkable 10-speed automatic transmission.

The 2018 Honda Odyssey is one of the highest-rated minivans in its class, upholding the Honda tradition of offering the utmost in safety, comfort, and reliability. The addition of the V6 engine option shows that Honda cares about packing a powerful performance into their vehicles, although, for next year, some more thought should be given to seat maneuverability and USB port availability.