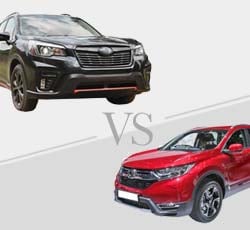 The 2019 Honda CR-V and the 2019 Subaru Forester are two of the highest-rated small crossovers on the market. Both have some special qualities. While the CR-V is extremely popular, a long list of updates has made the redesigned Forester more appealing than ever. Let’s see which one of these SUVs is the better choice.

For 2019, Subaru decided to do away with last year’s powerful turbocharged engine. Every new Forester now comes equipped with a 2.5-liter, Boxer inline-four engine. Total production stands at an adequate 182 horsepower and 176 pound-feet of torque.

Like the 2019 Honda CR-V, the 2019 Subaru Forester uses a CVT as opposed to a traditional automatic transmission. These gear-less transmissions are designed to save fuel. While the Subaru’s automatic CVT works well, expect the CR-V’s transmission to feel more responsive.

In terms of overall performance, the Honda CR-V outshines the Subaru Forester. Testers have clocked the turbocharged CR-V with a brisk 0-60 mph time of 8.4 seconds. This is noticeably quicker than the Forester’s 0-60 mph time of 9.3 seconds. When driving around town and merging onto the freeway, drivers will feel the CR-V’s stronger punch.

While the Subaru Forester isn’t a powerhouse, it can tow a reasonable 1,500 pounds. This is just right for drivers who may need to pull an ATV or small camper. The Honda CR-V’s towing capacity is about 115 pounds lower.

Both of these crossovers are good on gas. According to the EPA’s fuel economy estimates, the turbocharged Honda CR-V will return a combined 30 mpg. Even the CR-V’s base powertrain will deliver a combined 28 mpg. Subaru rates the Forester to return a combined 29 mpg, which is excellent for an AWD-equipped SUV.

While the Forester comes standard with Subaru’s outstanding Symmetrical AWD system, Honda’s AWD system is optional. Expect the AWD CR-V to maneuver well in light snow. However, the Subaru Forester is the superior off-road machine. It offers an exclusive X-Mode system, which optimizes grip on slippery trails. Hill descent control also helps the Forester to safely crawl down steep slopes. This adventurous crossover will have no trouble crossing mud holes and snowy mountain roads.

The Honda CR-V has a great antilock braking system. Even when making hard stops, it responds well. While the Subaru Forester’s braking system is not quite as strong, most people won’t have any complaints about its stopping power.

Owners can expect the Honda CR-V to offer above-average reliability. It should hold up well even after surpassing the 100,000-mile mark. J.D. Power gave the CR-V a 3.5 out of 5.0 rating for its dependability. This is the exact same rating given to the new Forester. Both crossovers come with a five-year powertrain warranty.

Both of these crossover SUVs offer an easygoing driving experience. They are unchallenging to drive in the city and on the open highway. However, a tighter turning radius makes the 2019 Subaru Forester especially easy to squeeze into compact spots.

In regard to overall handling on the street, the 2019 Honda CR-V takes the lead over the Subaru Forester. Precise steering and excellent balance give the CR-V a sporty feel. In many ways, it drives like a hatchback with a higher ground clearance. While the Forester handles well enough for most people, there’s greater body roll around curves. Also, expect the Forester’s steering system to provide less road feedback.

Despite the CR-V’s sporty driving dynamics, it still manages to offer a buttery smooth ride. Passengers will love how well this SUV absorbs bumpy pavement. You’ll find the Forester’s ride quality to be just as good. Whether running errands around town or breezing down the interstate, the Forester proves to be a smooth performer. Both of these SUVs are great for taking family road trips.

Very few crossovers in the segment provide a better driving position than the Subaru Forester. Drivers will be able to sit up high, which ensures a good view of the road. Outward visibility from every angle is better than average. The Honda CR-V has these same great qualities.

While seat comfort in the Subaru Forester is good, the Honda CR-V offers even better seat comfort. Because the Forester provides an extra 2.0 inches of legroom in the front, it’s an especially good pick for long-legged drivers. Meanwhile, there’s roughly an inch more legroom in the back of the CR-V. Whether you choose the CR-V or the Forester, four full-size adults will be able to travel in comfort. Getting in and getting out is easy for families.

Not only do these small crossovers provide a good amount of passenger space, but they also have a large cargo area. This is good news for active people. From surfing gear to camping essentials, a lot of extra stuff can fit behind the rear seating area. While the CR-V provides 39 cubic inches of storage space, the Forester offers 35 cubic feet of storage space.

Interior noise shouldn’t be a concern for passengers riding in the Forester. Its cabin remains very quiet at highway speeds. Road and wind noise are also minimum inside of the Honda CR-V. Both models receive high marks in overall build quality.

Honda’s latest Display Audio infotainment system is quite good. However, under-performing voice controls make it less rewarding than Subaru’s Starlink interface. This dual-screen system is extremely easy to operate. Smartphone integration only takes a few seconds. Excellent voice controls add to the system’s appeal. Like the Forester, the CR-V has a simple climate control system.

Safety is a serious priority for these family-friendly crossovers. They both secured an NHTSA five-star overall safety designation. This means occupants will enjoy maximum impact protection. However, the 2019 Subaru Forester does have a few advantages. According to the IIHS, it has better headlights and better child seat anchors.

A Honda Sensing system is available for the CR-V. This advanced safety package makes the everyday grind less hazardous. Features include forward collision mitigation, lane keeping assist, smart cruise, road departure mitigation. In contrast to the CR-V, the Subaru Forester comes standard with an EyeSight accident-avoidance package. It provides many of the same safety innovations found in the CR-V’s Honda Sensing package.

There are a few exclusive driving aids offered on the Subaru Forester. Many car shoppers will be interested in Subaru’s new DriverFocus system. This system does more than just detect the signs of sleepiness. It also uses facial recognition technology to determine if the driver is looking away from the road.

Reverse automatic braking is another safety innovation on the Forester’s list of upgrades. When preparing to back up, the system scans for any unseen obstacles. If the driver doesn’t react, the system will then intervene to prevent a collision by activating the brakes.

Adaptive LED headlamps are also only available on the Subaru Forester. These headlamps swivel to provide better lighting on winding roads. They’re especially helpful in rural areas where animals frequently cross the road.

The 2019 Subaru Forester is a great investment for anyone in the market for a new vehicle. It has an appealing starting MSRP of $25,270. Meanwhile, Honda gives the new CR-V an MSRP of $25,395. Both of these crossovers rank high in the value department.

Drivers looking to save money will be choosing between base Honda CR-V LX and the base Subaru Forester. Folks who desire the most equipment for their money will be happier with the Forester. Its standard 6.5-inch touchscreen provides Apple CarPlay and Android Auto smartphone support, which means drivers can quickly download mobile apps. Forester drivers will also enjoy Subaru’s EyeSight safety package. Standard LED headlights add to the base Forester’s value.

Aside from not providing Apple CarPlay and Android Auto, the base CR-V LX does not have a touch display. Furthermore, Honda’s safety package is not offered on this trim. To even get the CR-V with LED headlights, drivers must step up to the range-topping Touring trim.

Like most new vehicles, the CR-V’s cost of maintenance will increase after four years of ownership. However, expected repairs are minimum. Forester owners will likely have to spend a similar amount of money on servicing.

These small crossovers have a lot in common. They’re both affordable, easy to drive, and efficient. However, there are also some key differences that car shoppers must consider.

Drivers seeking more performance may lean more towards the 2019 Honda CR-V. Its turbocharged four-cylinder engine, which is found on most trims, delivers a very responsive performance. The 2019 Subaru Forester’s performance is a bit on the sluggish side. Some drivers will greatly miss last year's 250-horsepower engine, which made the Forester a lot of fun.

When venturing off the beaten path, the Subaru Forester takes a dramatic leap over the Honda CR-V. It’s a great crossover for adventurous families. Drivers will have no trouble tackling an average off-road trail. Subaru’s X-Mode system is remarkably effective at preventing the Forester’s tires from slipping. Remember, only the new Forester comes standard with all-wheel drive.

Interior comfort is about a tie. Like the Forester, the CR-V can easily accommodate four adults. Three kids can also comfortably fit in the backseat. Extremely tall drivers can take advantage of the Forester’s extra front-seat legroom. Both crossovers offer families excellent crash protection.

Exterior styling may also factor into the decision of some car shoppers. While the base models don’t really stand out, appearance upgrades help the upper trims to turn more heads. Orange exterior accents and a set of 18-inch black wheels give the Forester Sport a more interesting look. Meanwhile, Honda equips the CR-V Touring with dual chrome exhaust tips and a cool set of 18-inch aluminum wheels.

Automotive critics highly recommend both of these SUVs. Outdoor enthusiasts who love driving through the backcountry should choose the Subaru Forester, which packs a greater number of off-road goodies. Standard all-wheel drive also makes the Forester a top pick for folks living in cold-weather states. On the other hand, the Honda CR-V offers a sportier driving experience on the street. Both are superb family haulers.
Save Money on a 2019 Honda CR-V:
2019 Honda CR-V Comparison Guides: