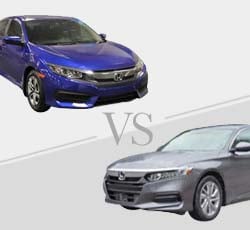 2019 Civic vs Accord - How do they stack up? What are the differences?

The 2019 Honda Civic and Honda Accord are two of the best performers in their respective classes. Therefore, choosing between these two could prove difficult. It will ultimately depend on each driver's unique needs.

What makes these two vehicles different aside from being in two separate classes? They both have 1.5-L engines on their EX trim levels and above, but there are differences in power. They also perform a little bit uniquely from one another and are priced at various MSRPs. For the most part, though, they have a lot of similar features and functions.

So, which one gives buyers the best deal? Which one has more power? More space? It is time to find out.

Every driver wants an ample amount of power from their vehicle, even if it is one they bought for fuel efficiency. When it comes to mixing miles per gallon and horsepower, Honda usually gets it right. The 2019 Honda Civic and 2019 Honda Accord are both good examples of this.

The Honda Civic starts its line-up with the base LX trim, which has a standard 2.0-L 4-cylinder engine capable of producing 158 hp and 138 lb-ft of torque. Unfortunately, this engine is underpowered and will likely get overlooked for that reason. It does come paired with a 6-speed manual transmission and leaves the option open for a continuously variable automatic transmission (CVT), which is standard on the higher trim levels. If one desires a hatchback version, that does get the 1.5-L turbo engine, which produces 174 hp and 162 lb-ft of torque.

Most drivers will likely opt for the 1.5-L, as it nestles neatly between the two 2.0-Ls. The 1.5-L smoothly delivers power, is fuel efficient, and produces an interesting growl when revved, giving you the sense of it being something powerful.

The 2019 Accord gets a 1.5-L engine standard on every trim level save for the Touring. The 1.5-L gets 192 hp and 192 lb-ft of torque. Upgrading to the Touring gives the vehicle a 2.0-L turbo engine with 252 hp and 273 lb-ft of torque. A CVT comes standard on the lower trim levels, and the Touring gets a 10-speed automatic transmission. The Sport trim has an option for a 6-speed manual transmission for those who prefer a stick.

Overall, the Accord's 1.5-L also smoothly delivers power to the wheels. It performs similarly to the Civic's 1.5-L and feels sufficient in virtually any driving condition.

Both the 2019 Honda Civic and Accord are fun and practical cars. Of course, there are a few differences that are worthy of being mentioned. The Civic is the sportier of the two models, and there is a lot of low-end get-up-and-go power right upon start-up, making it easy to zip through the city. The 1.5-L engine has no problem getting the vehicle from 0 to 60 mph in just 6.7 seconds, which is one of the fastest times in its segment.

The Civic's brakes are simple for the driver to modulate with their foot and track straight forward when pressure gets applied. The Civic has a remarkably good stopping distance, too. All around, the brakes should do well at inspiring driver confidence.

Handling and steering are also excellent, right on par with what Honda drivers have come to expect from their vehicles. The weight of the steering system feels totally natural, and guiding the vehicle along is easy thanks to how much precision this system has. Getting through a quick, tight corner is also simple since the system has such snappy reactions. And, as far as small sedans go, the amount of feedback to the driver is right on point. Also, the stability system is tuned well, and there is basically no body roll to be felt.

The Accord's driving performance is quite good too. While its 0-to-60 time is slower (a flat 8 seconds), this is pretty typical for a mid-sized sedan. The power flows fluidly though, and the amount of power generated feels just fine while scuttling about town.

The Accord's braking system is also solid and makes the driver feel more confident behind the wheel. The brakes help the vehicle come to a straight stop, never veering. The pedal has just the right amount of firmness to make the brakes feel secure. The Accord can make a panic stop in 122 feet when going from 60 to 0 mph, which is a segment average.

Handling is superb in the Accord, especially with the multi-link adaptive suspension system equipped. While taking turns, the vehicle feels firmly planted on the ground, and it is impossible to feel any body roll. Everything is predictable and safe. Steering is less spunky and is a bit vague, but the feedback and weighting of it are definitely adequate.

Overall, the Civic provides a slightly more thrilling ride if that is what a buyer is seeking. However, the Accord is just as solid, save for a few minor issues with steering. It is still a very practical vehicle with a family-friendly feel to its driving performance.

Of course, drivability encompasses a lot of other factors, such as interior design, comfort, and how functional the equipped technology happens to be. With that being said, the 2019 Civic offers a lot in the way of comfort. The driver can power-adjust the driver's seat a number of different ways, easily finding a position that works best for them. Even during long drives, the plush seats remain comfortable and provide plenty of support.

The ride itself is cozy, too, as bumps - even those obnoxious mid-corner ones - are smoothed out with speed. The CVT gets a little loud, and the engine can be a bit grumbly, but those are really the only things that will be audible while driving. Otherwise, drivers can enjoy their music and conversations without interruptions.

Honda takes the simplistic approach to designing their controls. While the Civic throws quite a few of them at their drivers, their placements and labeling all make sense. The touchscreen display is the only thing that is still a bit clunky, although it is much better than it used to be since it was redesigned for the model year.

The Civic is remarkably spacious, whether it's the coupe, sedan, or hatchback. Tall passengers can easily sit in the back without feeling cramped, and everyone should have enough leg and headroom up front. The driver will get good visibility from all around the vehicle thanks to the slender roof pillars and standard rearview camera.

The Civic's cargo area has 15.1 cubic feet of cargo space with all seats in place, which is impressively big for this segment. Pop those rear seats down for even more room. A week's worth of groceries can easily fit back there.

The entire cabin is designed with utility in mind with plenty of small item storage spaces. The Civic has a two-level cubby area up front for small devices, and the cupholders in the rear are considerably large.

As far as technology goes, the Civic has everything imaginable. Honda has a ton of standard features, such as Android Auto and Apple CarPlay smartphone app integration, the HondaLink system, and dual USB ports on the Sport trim and above. Built-in voice control can be aggravating since it requires extra steps, but using Apple CarPlay or Android Auto makes it a lot easier.

The Accord is nothing to scoff at either. While the ride tends to feel busy over rougher road surfaces, bumps are handled with ease on regular roads. The adaptive dampers on the Touring are even better at repressing bumps than other adaptive dampers in this class. There is some wind noise to be heard on the highway, but the cabin is mostly quiet otherwise.

The interior of the Accord is also smartly designed, but there is a bit of a big stepover getting into the vehicle due to how the doorframes are constructed. There is a massive amount of space, and people of all sizes can feel comfortable fitting in the rear. The rearview camera is helpful for backing out of tight spaces, but drivers won't need to rely on it since the roof pillars are thin and nothing else really obstructs the view.

Cargo space in the Accord is nothing shy of impressive. With all seats in place, there is 16.7 cubic feet of cargo space. Longer objects can be stored when the 60/40 split-folding rear seats are folded down. There are also plenty of small item storage areas to be found, and only the glovebox seems too small.

The tech set-up on the Accord is basically the same as the Civic. Voice recognition is the only downfall. Apple CarPlay and Android Auto also come standard and are a good alternative to the built-in voice recognition system.

Basically, if someone wants cargo space, the Accord is the more practical choice. However, the Civic tends to feel a bit more lively on the highway.

Safety is, of course, a huge issue when it comes to buying a new car. And it is something that Honda takes very seriously. Honda equips the Civic with the Honda Sensing suite, which includes adaptive cruise control, lane keep warning, lane departure warning, and forward collision warning. This system is mostly easy to use, but forward collision warning does occasionally emit a false warning.

The National Highway Transportation Safety Administration (otherwise known as NHTSA) gave the Civic 5/5 stars overall, and it got 5/5 stars on every test conducted on it. There was only a 9.5% risk of a rollover noted. The Insurance Institute of Highway Safety (IIHS) gave the Civic 'good' marks on all of its tests.

The Honda Accord has the Honda Sensing suite equipped as well, so it has the same standard and optional features available. The NHTSA also gave it 5/5 overall stars, 5/5 stars on every test issued, and noted a 9.3% risk of rollover.

This one is definitely a draw since the systems are essentially the same.

The biggest difference between the 2019 Honda Civic and Accord is the price. The Civic ranges between $19,550 and $27,400 while the Accord costs between $23,720 and $35,950. Given that they function basically the same, the Civic is essentially the better deal here.

The 2019 Honda Civic only edges the 2019 Honda Accord out based on price. They both drive well and have a lot of fantastic features. They each sit at the top of their respective segments. Of course, if extra cargo space is needed, the Accord is the best choice in its class and a smart choice overall.