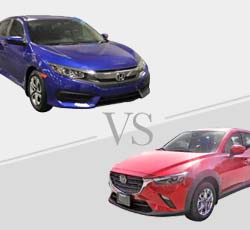 Making the choice to buy a new vehicle can be tough in such a competitive market. This rule can certainly be applied to the 2019 Honda Civic and the 2019 Mazda 3. These two vehicles are constant competitors in their class.

The Mazda 3 has been totally revamped for this model year, and the Civic just got a mid-cycle refresh. That means both of these small sedans are not just full of cool tech gadgets, but they actually look chic and contemporary on their exteriors.

But which one presents buyers with the best deal? It is time to find out.

The Honda Civic has been the reigning champ in its class for a few years now when it comes to a well-rounded performance. Its powertrain certainly packs a punch regardless of which powertrain pairing is equipped. The base trim (the LX) coupe and sedan models get a 2.0-L 4-cylinder engine (which generates 158 hp and 138 lb-ft of torque) while the hatchback LX comes with a 1.5-L 4-cylinder turbocharged engine (which gets 174 hp and 162 lb-ft of torque). A 6-speed manual transmission comes as standard equipment, but a continuously variable automatic transmission (CVT) is available.

On the SI trim level, the 1.5-L is tweaked so that it generates 205 hp and 192 lb-ft of torque. And, on the line-topping Type R trim, there is a 2.0-L turbocharged engine that puts out an impressive 306 hp and 285 lb-ft of torque. Both the SI and the Type R are only available with the 6-speed manual transmission equipped.

Drivers who like this type of variety will find themselves a touch disappointed with the 2019 Mazda 3. This year, Mazda decided to standardize last year's optional 2.5-L engine, which generates 186 hp and 186 lb-ft of torque. It comes with a standard 6-speed automatic transmission. There is room to add a manual transmission, but that requires buying the front-wheel drive hatchback and equipping the Premium Package.

Both the Honda and Mazda have powertrains that generate a reasonable amount of power for a coupe or hatchback. For not being turbocharged, the Mazda 3's 2.5-L engine does a good job of getting up to speed on the highway. However, it is the Honda Civic's 1.5-L turbo engine that steals the show. It is worth the extra cost to get the upgrade since it delivers such a smooth, easy performance. It's clear that the Civic has the edge this year with its versatility and performance.

Both the 2019 Honda Civic and the 2019 Mazda 3 run at the front of the pack as far as drivability is concerned. Both are putting in some seriously stellar performances, and buyers are talking about how pleased they are with either one.

The Honda Civic has some of the best acceleration capabilities in its class regardless of which powertrain is equipped. The 1.5-L turbocharged engine does an impeccable job of delivering enough low-end pizzazz while bustling about in the city. And, of course, it is all smooth sailing from this powerful engine when pushing the Civic up to highway speeds. It is so swift that it has been clocked going from 0 to 60 mph in just 6.7 seconds, a phenomenal time for this segment.

Braking also feels strong on the Civic. This vehicle has no problem making a stop when going at slow city speeds or above 55 mph. A quick stop can be made without the vehicle veering to the side, and its stopping distance is one of the shortest in this segment.

Additionally, both steering and handling inspire driver confidence. The steering wheel feels completely natural when held by the driver, and the vehicle tracks just like how it should when the wheel is turned. There is no hesitation, and the driver gets just the right amount of feedback. The stability system seems tuned to perfection, and there is no noticeable body roll.

So, how does the 2019 Mazda 3 stack up in terms of drivability? It comes close to matching the Civic but falls short in a few key areas. As far as acceleration goes, the Mazda 3 bests quite a few competitors (going from 0 to 60 mph in 8.3 seconds) but just cannot top the Civic. The engine does produce a steady supply of power though.

The brakes on the Mazda 3 are easy for the driver to modulate and have just the right amount of firmness to them. Their stopping distance is a little bit longer than the Civic's, but the Mazda 3 still stays within the average range for this segment.

Steering and handling are where the Mazda 3 starts to pale in comparison. Steering feels too light for many drivers to enjoy. It manages well in most situations but could use a bit more bulk. Handling isn't terrible either, but it lacks the spunk of the Civic. In other words, the way that the Mazda 3 drives is pretty average.

Both the Civic and the Mazda 3 have some good things going on inside of their cabins, but again, it is the Civic that comes out on top. Anyone who is familiar with its bigger sister, the Accord, drivers will find a lot of interior similarities. Honda has this fantastic habit of streamlining a lot of things on their vehicles, and on the Accord and Civic in particular. The coziness and thoughtful design of the 2019 Accord is reflected in the cabin of the Civic.

The Civic has some seriously comfortable seats, packed with plenty of support in the front and the rear. The driver's seat is highly adjustable, so finding the right position is easy work. They work well for long drives and are ideal for those who tend to suffer from spinal pain.

As far as its ride quality goes, the Civic feels more like the Accord. Bumps of all sizes in the road get quickly absorbed, Mid-corner dips are particularly well-handled by this car. And, with regard to noise, the turbo 1.5-L can get grumbly, but that's about all that any occupant will hear.

The Civic also features a nice array of standard infotainment features. 2019 saw a huge push by Honda to revamp their technology, and it has really paid off. The infotainment system has become much more user-friendly, although smartphone app integration via Apple CarPlay and Android Auto are still superior bits of technology.

The Mazda 3 also has a lot going on inside of it. It has a sporty nature, but this does mean the vehicle can feel too firm in terms of its ride quality. The headrests on the front seats could lean back further, but the seats are well-bolstered and cushy overall.

The Mazda 3 is quieter than the Honda Civic. No real engine noise can be heard, and wind and road noise are kept to a bare minimum. It is a calm, well-insulated cabin. The real downfall is the climate control system. The controls themselves are poorly labeled and become confusing for users. The airflow also seems lacking, as the dial has to be cranked all the way up for the car to heat up quickly or down low for the cool air to be felt blowing in.

Tech features in the Mazda 3 are good but not great. Drivers should appreciate the one-knob control set-up, but the touchscreen display is far too clunky for the system itself to be hailed as 'user-friendly'. The audio system works as expected and pushes out a nice amount of quality sound, but connecting via Android Auto can be glitch-y. This, coupled with voice recognition's reliance on absolutely perfect syntax, takes away from the Mazda 3's user-oriented nature.

Safety is a concern for all drivers regardless of what vehicle they are in or who is with them. And that is precisely why people keep buying Hondas and Mazdas. With plenty of features and some solid test scores, both 2019 line-ups are impressive, to say the least.

Mazda equips the 3 with its Smart Brake Support, a system that lets the driver know if they are getting close to a pedestrian, bicyclist, or other vehicle. If the system detects that the 3 is getting too close too fast, it will apply the brakes so as to reduce the risk of experiencing a crash. It is a helpful feature that is worth having.

Other driver aids on the Mazda 3 include a lane departure warning system and Mazda Radar Cruise Control. The car's radar cruise control system lets drivers select the distance they want to maintain between the vehicle in front of them. Giving the driver more control over distances is a smart way to go, and the system works well.

Safety ratings for the 2019 Mazda 3 are outstanding - so much so that they earned the vehicle Top Safety Pick from the International Institute for Highway Safety (IIHS). The National Highway Traffic Safety Administration (NHTSA) has not yet rated the 2019 Mazda 3, but if it comes close to last year's ratings, the new 3 should receive top marks.

The 2019 Honda Civic is similarly loaded with a ton of driver aids. Its collision mitigation system will apply the brakes promptly in order to avoid getting into an accident, and it, unlike other systems out there right now, does not issue annoying false alarms. Lane keep assist and adaptive cruise control also come in handy, as does the standard back-up camera.

As far as safety ratings go, the 2019 Civic also has some good marks. However, NHTSA marked the Civic down as 'poor' for its headlights and just 'acceptable' for the LATCH child safety system's ease of use.

In this category, it seems that the Mazda 3 takes the cake. Mazda and Honda are clearly both devoted to safety, but Mazda has really upped the ante when it comes to refined, all-around vehicular safety.

Buyers could be paying anywhere between $19,000 and $30,000 for either of these vehicles, so they need to know which one presents the best deal. Fuel efficiency is great on both, so even in the long-run, these cars both have a lot of value. However, the Civic definitely gets the best fuel efficiency at 32 mpg in the city and 42 mpg on the highway.

Given that the Civic has the better line-up of powertrain choices and enhanced drivability, the Civic presents the best deal. Sticking with one of the EX trims can get drivers a plethora of great features while still keeping the vehicle affordable. The Mazda 3 does typically price a little bit above the Civic, and its lack of customization options for the powertrain don't do it much justice.

The 2019 Honda Civic and Mazda 3 are both smart buys. These automakers are known for making vehicles that last for years without having a ton of expensive, unexpected repairs crop up. And they're both very safe to drive. But the clear winner here is the Civic with its refined ride quality and spunky 1.5-L turbocharged engine option. The new Honda Civic is absolutely the coupe and hatchback to beat this model year.