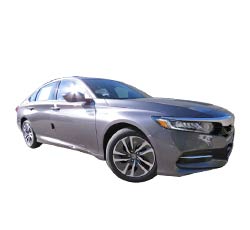 What 2020 Honda Accord Hybrid Trim Level Should you Buy? What is the Difference Between Trims?

The 2020 Honda Accord Hybrid is one of the most talked-about hybrid variants in its class, and there are a few pretty good reasons for that. With its impressive fuel economy, ultra spacious cabin, and abundance of cargo space, the Accord Hybrid sure is a power player this model year. But which trim level is the right one for you?

With the Accord Hybrid, you can choose from the regular Hybrid, the EX, EX-L, and Touring. The biggest difference you should note is that the hybrid variants offer the same features and specs as their gas-only counterparts, but they are equipped with the hybrid powertrain. That being said, it is time to jump into this comparison review and figure out which 2020 Honda Accord Hybrid trim level might be the right fit for you.

Compare the 2020 Honda Accord Hybrid vs EX Trim Level.  What is the difference?

First in the hybrid line-up is the standard Hybrid model, which is followed by the EX trim level. They are both equipped with a 2.0-L inline-4 cylinder engine that generates 143 hp and 129 lb-ft of torque. Two electric motors get added to generate a total of 212 hp. This hybrid powertrain configuration comes standard across the entire Accord Hybrid line-up. There are three driving modes that accompany this powertrain: EV Drive (which uses only battery power), Hybrid Drive (which uses a combination of electricity and gasoline from the engine to power the vehicle), and Engine Drive (which will, in certain circumstances, employ the gasoline engine at a fixed ratio). This engine gives the Hybrid models a surprisingly swift acceleration of about 7.1 seconds going from 0 to 60 mph.

Now, here's where things start to get different. As far as tech features go, the standard Hybrid is pretty well-equipped, but the EX does offer more. On the Hybrid, safety features include Honda Sensing technology. This gives you a collision mitigation braking system, traffic sign recognition, lane keep assist, road departure mitigation, and low speed follow on the adaptive cruise control system. Other safety features include automatic high beams, a multi-angle rearview camera with dynamic guidelines, brake assist, vehicle stability assist with traction control, LED daytime running lights, SmartVent airbags for the front sides, and child-proof rear door locks. The EX adds to that a blind spot monitoring system but nothing else.

There are more variances when it comes to the audio and connectivity set-up. The Hybrid offers a 4-speaker 160-watt sound system with a customizable 7-inch screen. Bluetooth HandsFreeLink and audio streaming come standard, as do a radio data system, speed-sensitive compensation, and a 1.0-amp USB port on the front console. The EX upgrades to a 180-watt 8-speaker sound system with an 8-inch touchscreen display, two 2.5-amp USB outlets, SMS text messaging, HD radio, SiriusXM Satellite Radio, smartphone app integration via Android Auto and Apple CarPlay, and Honda Link.

As far as creature comforts go, the Hybrid and EX are pretty similar. Both have dual zone automatic climate control, power windows with automatic up/down on the driver's window, programmable power-locking doors, push button start, one-touch turn indicators, a tilt and telescoping steering column, a huge center console bin, cupholders for the front and rear, illuminated vanity mirrors for the front sun visors, map lights, a capless fuel filler, a sunglasses holder, 12-volt power outlets for the front and center consoles, a defroster for the rear window, a light in the cargo area, big side door pockets, illuminated power window switches, a trunk main switch, and a locking glove box. On top of that, the EX gives you a driver-side seatback pocket for extra storage space.

On the outside, these two trim levels look fairly similar. They both have an aluminum hood, a fin-style antenna mounted on top of the roof, taillights with integrated LED light bars and LED brake lights, body-colored door handles, LED low-beam headlights with an automatic on/off function, and variable intermittent windshield wipers. The EX adds LED fog lights, Smart Entry with a mechanism that automatically locks the car when it detects you walking away, a one-touch tilting power moonroof, and an active shutter grille.

There are clearly some profound differences between the standard Hybrid and the EX. The EX gives drivers a major boost when it comes to infotainment, which, coupled with standard blindspot monitoring, will likely lead more consumers to buying it over the standard Hybrid.

Compare the 2020 Honda Accord Hybrid EX vs EX-L Trims.  What is the difference?

Now, we have to address the EX-L. As you can probably imagine, the EX-L is basically the EX with a few noteworthy upgrades. So, what exactly are those upgrades? Well, they will not have anything to do with standard safety features, as those are entirely the same on both trim levels. The EX-L does, however, give you a nice 10-speaker 450-watt premium sound system, which happens to include a subwoofer. This is the only difference when it comes to the EX-L's infotainment system.

The EX-L's interior does get a few boosts as well. The steering wheel and gear shift knob both get wrapped in leather. An automatically dimming rearview mirror gets swapped in, and the HomeLink Remote System gets equipped as well. The HomeLink Remote System allows you to control your garage door (as well as your home's connected electrical features) from the comfort of your vehicle. Also, the driver's seat gets two position memory settings. The front passenger's seat becomes power-adjustable four ways, and the seats are trimmed in gorgeous leather to match the steering wheel and gear shift knob.

Their exteriors are mostly the same as well, save for one minor detail. The EX-L has turn signals built into its power side mirrors, which are also body-colored and heated. Otherwise, you can expect everything to look like the EX. There are not that many variances, but the few big ones (like the sound system and seating upgrades) might make some drivers choose this slightly more luxurious trim level.

Compare the 2020 Honda Accord Hybrid EX-L vs Touring Trims.  What is the difference?

Speaking of luxury, the 2020 Honda Accord Hybrid's Touring variant is borderline luxury sedan. It looks and feels expensive once you nestle yourself into its gorgeous and user-friendly cockpit. So, what are some of the things the Touring gives you that the other trims do not? Let's find out.

First and foremost, a head-up display gets added to the cockpit and helps keep your vehicle's safety data separate from what is on your touchscreen display. Since it is set up higher on the dash, it really does keep your head up and eyes on the road ahead of you.

Quite a few items also get added to the list of standard infotainment features. This trim levels gives you Honda's satellite-linked navigational system, which shows you readouts of Honda HD traffic and has voice recognition. (Of course, if you do not wish to use these built-in features, you can just switch over to the apps you have integrated from your smartphone).

HondaLink Subscription Services is also standard on the Touring trim level. This gives you a one-year complimentary trial of Honda's Security services and a three-month complimentary trial of the Remote/Concierge service. You do have to enroll in order to access Remote/Concierge and some of the Security features. When you reach the end of each trial period, you will have to pay a subscription fee to continue receiving those services. WiFi hot spot capability (which requires an AT&T data plan), a Qi-compatible wireless phone charger, and Near Field Communication also come on the Touring.

A lot of the same creature comforts that you get on the EX-L are also standard on the Touring. However, the Touring does happen to add door pull ambient lighting to the cabin, which gives off a nice glow while you are otherwise in the dark. The rear outboard seats gain the heating function, and the front seats get ventilation, which certainly feels great on the backside when driving around in leather seats on hot summer days.

The exterior of the Touring does have some feature changes that distinguish it from the EX-L trim. For example, you will find way more chrome details. The EX-L's body-colored door handles are swapped out in favor of chrome handles, which have a nice shine to them. There are also chrome exhaust finishers to match them. In addition to the chrome upgrades, you also get rain-sensing windshield wipers, LED headlights with an auto on-off function, courtesy lights, body-colored front and rear parking sensors, and side mirrors that have reverse gear tilt-down on them.

Mechanically, the one difference between these two hybrid variants is that the Touring has adaptive dampers and slightly larger stabilizer bars on the front and rear. What does this mean? It means that the vehicle's suspension stiffness can be changed in a matter of mere seconds. This makes for a sharper handling and much smoother ride quality, and you can bet that this is a main reason as to why some people choose the Touring trim level (both hybrid and gas-only) over the others, even though it means spending more money.

The 2020 Honda Accord Hybrid has some great variants to choose from. The standard Hybrid is not even that basic, as it has almost every driver aid that you could ask for in a vehicle. And it is certainly the most cost-efficient option. And the line-topping Touring hybrid sure has a lot of bells and whistles, placing it right on the border of being a luxury hybrid sedan. But it makes for a bit of a price jump.

That is why our vote for the best all-around trim level goes to the EX. While the EX-L adds a few nice upgrades, it does not do enough to distinguish itself from the EX and does not really justify the extra money spent. The EX is fitted with enough safety and infotainment features to please most drivers. It is also budget-friendly at the dealership and afterward, as you will not need to spend as much on gas as you would in the gas-only variant (which itself is pretty fuel-friendly).

You cannot make a bad choice when opting for this year's Accord Hybrid. However, the trim level most likely to suit the needs of the average driver is the EX, and it is certainly worthy of being taken out for a test drive.

Save Money on a 2020 Honda Accord Hybrid:
Are you Shopping for a New Vehicle? Find the Best Deals with "Free - No Hassle" Prices Quotes.