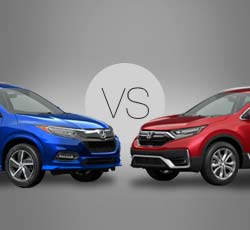 The world of compact SUVs has greatly expanded in recent years. It seems like every manufacturer has a horse in the race, and in fact, some companies have two. Honda has long been one of the leaders in the industry, and it has created two options for their customers who are looking for smaller SUVs or crossovers. The 2020 Honda HR-V and 2020 Honda CR-V are nicely appointed vehicles that will prove to be reliable and versatile, and this guide will go over how they compare to each other.

As one would expect from two very similar models from the same manufacturer, the Honda HR-V and CR-V have the same type of aesthetic. From a stylistic standpoint, the HR-V does have a slightly edgier feel, with more curves and angles built into its body. Its roof appears to slope downward more than the CR-V's does, and this adds to the sportier style.

When looking at these two vehicles right next to each other, it'll be clear that the CR-V offers a lot more space than the HR-V. The CR-V has a wheelbase of 104.8 inches and an overall length of 182.1 inches, while the HR-V has a 102.8-inch wheelbase and measures 170.4 inches from end to end. At the same time, the CR-V is about three inches taller and three inches wider than the HR-V. Ground clearance depends on whether one selects all-wheel or front-wheel drive. In the CR-V, ground clearance is 7.8/8.2 (2WD/AWD) inches, and in the HR-V, it's 7.3/6.7 (2WD/AWD) inches.

These are all important numbers to take into account because some people may prefer sitting higher off the ground and driving a larger vehicle, while others may want a more compact vehicle out of personal preference or because it's easier to park. In both models, visibility is good. There's not too much bulk to the vehicles to cause any issues while maneuvering around tight spaces.

Differences are also seen in the interior of the cabin. The CR-V has about an inch more headroom in the front and rear seats, and it has slightly more shoulder room as well. What may come as a surprise is that leg room is almost the same in the two models. The CR-V has 41.3 inches of leg room in the front and 40.4 inches of leg room in the back. In the HR-V, these numbers are 41.2 inches and 39.3 inches, respectively. This is great news for anyone who likes the more compact SUV but still wants his or her rear-seat passengers to have the space they need to feel comfortable.

The main way in which the two SUVs differ in interior measurements is that the cargo room in the CR-V far surpasses what the HR-V has to offer. When the rear seats are up, there is 39.2 cubic feet of cargo space in the CR-V and only 24.3 cubic feet of cargo space in the HR-V. When those seats are folded down, cargo capacity expands to 75.8 cubic feet in the CR-V and 58.8 cubic feet in the HR-V. This would be a significant factor to remember if potential customers plan on occasionally loading up their vehicles with luggage, sports equipment, or other types of gear.

Torque is another way in which the CR-V pulls ahead. It has 179 pound-feet of torque, and the HR-V comes with 127 pound-feet of torque. This can translate into greater towing power. The CR-V is rated to tow 1,500 pounds, while the HR-V has not been designed for towing.

These numbers just described are applicable to the traditional CR-V. There's also a hybrid CR-V that customers can consider. The hybrid CR-V uses a 2.0-liter engine in conjunction with an electric motor. The two components work together to create 212 horsepower and 232 pound-feet of torque, so this would actually be the best type of powertrain if anyone is particularly interested in performance.

There are a number of associated features that drivers will appreciate in both vehicles. The HR-V and CR-V have an Eco Assist system that optimizes efficiency, and they have Hill Start Assist, which works when the vehicle is stopped on an incline. This function holds pressure on the brakes while the driver switches from the brake pedal to the gas pedal. What's nice is that all-wheel drive is available on both models. With all-wheel drive, the Honda SUVs can sense when the wheels might be having trouble gripping the road, and the engine can be directed to send power to all four wheels so that traction can be improved.

Remote start capability is becoming more common these days. It be convenient to have, especially on the hotter or colder days in which the climate control system needs a few minutes to make the cabin more comfortable. Remote start is available on the CR-V but not on the HR-V.

The two models use the same type of transmission, which is a continuously variable transmission. With this transmission comes a Sport Mode feature. Drivers would select Sport Mode when they want their engines to be a little more responsive so they can drive more aggressively.

Aside from what's found under the hood, there are many ways in which the two Honda SUVs differ. In general, the CR-V is going to offer more than the HR-V, in terms of the number of amenities and the quality of components. As such, the CR-V comes with a higher price tag, so the adage that "you get what you pay for" definitely holds true.

The HR-V has five trims, the LX, Sport, EX, EX-L, and Touring. Only the Touring has a power-adjustable driver's seat. The top three trims come with heated front seats, and the top two trims have leather seats.

The CR-V has four trims, which are the LX, EX, EX-L, and Touring. The top three trims have a power-adjustable driver's seat that can move in 12 different ways and has has four-way lumbar support, and the CR-V hybrid EX and all EX-L and Touring models have a two-position memory function. The top two trims also have a power-adjustable front passenger's seat for convenience. Like the HR-V, the EX-L and Touring have leather seats, and the EX and higher trims have a heating element in their front seats.

Both of these Honda SUVs have a number of storage compartments to help people stay organized, interior lighting, and steering wheel-mounted controls. The vanity mirrors on the EX and higher trims are illuminated. While the HR-V has an automatic climate control system, starting with the EX, the HR-V starts out with an automatic climate system and moves to a dual-zone system at the EX level. Both models offer a HomeLink remote system and automatic-dimming rearview mirror, but only the HR-V has available ambient lighting and a heated steering wheel.

Technology is an important factor as people shop for new vehicles. Smartphone connectivity and a large touchscreen are some of the main attractions of both Honda models. The HR-V and CR-V have Bluetooth, at least one USB port, and at least four speakers. On each vehicle, the LX trim has a five-inch color LCD screen, while the others have a seven-inch touchscreen with customizable settings, Apple CarPlay, and Android Auto. The touchscreen comes with SiriusXM and HD Radio in all of these higher trims, except for the HR-V Sport.

There are some minor differences between the Honda HR-V's and CR-V's entertainment systems. First, Pandora compatibility comes on all CR-V trims, but it's excluded from the LX trim of the HR-V. The CR-V has the addition of two 2.5-amp USB charging ports that are accessible to the rear-seat passengers. While both Touring models have navigation, only the Touring CR-V has wireless charging.

Further, the speaker system in the CR-V is enhanced. Its Touring trim has a 330-watt system with nine speakers, and the EX-L has eight speakers. In comparison, the top three trims on the HR-V only have six speakers.

Overall, the CR-V has a more upscale environment. With more luxury amenities, it would appeal to people who have more expensive tastes and want to treat themselves. That being said, the HR-V also has some nice elements to it, and most of its trims come with the smartphone connectivity that many modern consumers are expecting to have in their new vehicles.

The HR-V and CR-V are built in the same manner. They have advanced airbags in the front, SmartVent front side airbags, side curtain airbags, and three-point seat belts in every position. They also have LED Daytime Running Lights, a pressure monitoring system for the tires, anti-lock brakes to prevent skidding, and a multi-angle rearview camera to help people see behind their vehicles when they're backing up.

There are numerous driver-assist technologies on these SUVs as well. These systems are proactive about keeping people safe, as they continually monitor the roads and alert drivers about potential issues. In certain situations, they can take corrective measures as they try to prevent accidents from occurring.

All four trims of the 2020 Honda HR-V have forward collision and lane departure warning systems, and they have road departure mitigation and collision mitigation braking systems. The first two mechanisms will warn drivers when they're approaching other vehicles too quickly or veering out of a lane, and the other two systems equip the vehicle to make adjustments to braking or steering to reduce the chances of getting involved in an accident.

These same driver-assist systems are found on the Honda CR-V, but only on the EX, EX-L, and Touring trims. Those three trims use Honda LaneWatch to monitor blind spots. This program utilizes a camera embedded in the passenger-side exterior mirror and can display a live feed on the touchscreen when the driver is trying to change lanes. On the HR-V, there's a more basic blind spot monitoring alert system, but it does come with rear cross-traffic monitoring.

Because the HR-V and CR-V are both made by Honda, the similarities of the two vehicles probably outweigh their differences. The general look and feel of the vehicles, as well as their infotainment and safety systems, are very comparable. However, there are some notable ways in which the two SUVs can be differentiated.

One of the main things that sets them apart from each other is their powertrains. The CR-V is going to provide people with more horsepower and torque, whether one chooses the traditional or hybrid configuration. Because it does come in a hybrid versions, the CR-V wins in the efficiency department as well.

The two vehicles have almost the same amount of leg room for people in the front and the back, but the CR-V's size advantage is evident when examining cargo space. It has considerably more room behind the second-row seats, and this also means that it has more maximum cargo space when the rear seats are folded down.

In the end, customers will have to decide whether they want a vehicle that's bigger, more powerful, and more expensive or something that's budget-friendly and compact.

Save Money on a 2020 Honda HR-V:
Are you Shopping for a New Vehicle? Find the Best Deals with "Free - No Hassle" Prices Quotes.