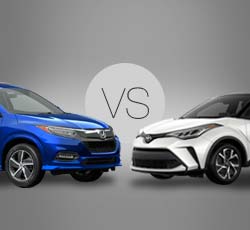 Honda and Toyota are two leaders in the industry, known for the dozens of reliable vehicles that they've designed over the past several decades. These companies have continued to adapt and innovate, and in response to the market's demand for small SUVs, they've respectively developed the HR-V and C-HR. The 2020 Honda HR-V and 2020 Toyota C-HR both have a modern look, and they give customers some versatility. Though they're in the same automotive class, the models do differ in several ways, and this guide will go over their various features.

These vehicles can be considered lightweights. Their engines are in the same league as those found on compact sedans and small SUVs, far from what one might see in a full-size SUV or even a larger sedan. That being said, the amount of power displayed in these models should be plenty for a large sector of the market.

Both the Honda HR-V and Toyota C-HR have four-cylinder engines, with the Toyota's being a bit larger. It has a displacement of two liters, in contrast with the 1.8 liter-size of the C-HR's engine. This isn't really a major difference, though, as evident in the comparable abilities of these engines. In the C-HR, there's 144 horsepower and 139 pound-feet of torque, and the HR-V can generate 141 horsepower and 127 pound-feet of torque.

While on the roads, drivers in the Honda and Toyota will enjoy a smooth ride, even if they might not win any speed competitions. Both models have continuously variable transmission, and depending on the exact trim, they could come with a manual shift function. This allows people to mimic the feeling of driving a manual.

A main way in which the Honda HR-V stands apart from the Toyota C-HR is that it has available all-wheel drive, which Honda calls "Real Time AWD with Intelligent Control System." It's an electronically activated program that can noticeably improve performance by sending power to all four wheels instead of just the front two. It can engage itself almost instantly when it senses an issue with traction. This AWD system is available on the LX, Sport, EX, and EX-L, and it's a standard component on the Touring trim of the HR-V.

These SUVs have been built to be practical and reliable. The HR-V and C-HR each come with a powertrain warrant that is good for five years or 60,000 miles, whichever mark comes first. This is pretty standard for the industry.

With their youthful vibes, the Honda HR-V and Toyota C-HR look fun and exciting, but does this translate into a nice ride? It depends on one's perspective, as anyone who loves high-performance cars, SUVs, and trucks might feel that these two models are a little lackluster. However, if any customers would be perfectly happy cruising around town and don't have the desire to push the gas pedal as far down as it can go, these SUVs will do the job just fine.

The HR-V and C-HR give people a lot of comfort, as long as they're sticking to the paved roads. Off-roading will be a challenge in both of these SUVs, so it's not generally advised to do anything too extreme in them. The noise level in the cabin is moderate, with things being a bit louder during acceleration.

It seems like technology has permeated all aspects of modern life, and with high-tech features, the Honda HR-V and Toyota C-HR can attract a lot of people. The Toyota SUV has an eight-inch touchscreen and an infotainment system that includes six speakers, Bluetooth, Amazon Alexa, advanced voice recognition, and SiriusXM Satellite Radio. Plus, it comes with Apple CarPlay and Android Auto so that people can have convenient, quick access to information stored on their phones. The XLE and Limited trims can be set up to play HD Radio as well. In addition, each C-HR can be turned into a 4G LTE Wi-Fi hotspots that can support up to five devices.

Honda has set up its technology package a bit differently. Its base model only comes has a five-inch LCD screen, four speakers, and Bluetooth. Having Bluetooth means that people can stream audio and make hands-free phone calls, but this feature is not as advanced as Apple CarPlay and Android Auto. Honda has integrated that smartphone compatibility into the HR-V, only starting with the Sport trim. At this level, the SUV gets a seven-inch touchscreen and Pandora compatibility. The EX is upgraded with SiriusXM Satellite Radio, HD Radio, and six speakers, and the Touring is enhanced with a satellite-linked navigation system and Honda HD Digital Traffic.

Both Honda and Toyota have made it a point to build vehicles with comprehensive safety components. Not only do these features protect passengers during accidents, but they can also work to prevent those accidents from occurring.

Passive safety features are those that will become important in the case of a collision. The 2020 HR-V and C-HR have multiple airbags placed around their cabins, three-point seat belts in all positions, and the LATCH system for child seats. They also have mechanisms that are in place to improve control and stability, as well as anti-lock brakes, tire pressure monitoring systems, and rear-view cameras that work while the vehicles are backing up.

In recent years, the automotive industry has really ramped up its efforts to incorporate driver-assist technologies into vehicles. Drivers of the HR-V and C-HR will benefit from all of these innovations. The Honda HR-V, starting with the EX trim, has forward collision and lane departure warning systems, a lane keeping assist system that can gently correct steering, adaptive cruise control, high beams that can turn themselves on and off depending on the road conditions, and Honda LaneWatch. Honda Lane Watch is a blind-spot monitoring program that lets people know if it's safe to change lanes.

The package is similar in the Toyota C-HR. Toyota calls its safety package "Toyota Safety Sense P", and it consists of pre-collision warning with pedestrian detection, lane departure alert with a steering assist function, the same type of automatic high beams as seen in the Honda, and an adaptive cruise control system that works at a full range of speeds. In a head-to-head match-up, the Honda may have the edge since it has the blind-spot monitoring system. It seems like this would frequently come in handy if anyone drives on busier roads as part of a daily routine.

It's important to note that both vehicles have some sort of emergency braking function. Honda calls its program a collision mitigation system, and Toyota's automated emergency braking is built into the pre-collision system. In either of these models, if sensors detect that a frontal collision is about to happen, pressure can be instantly applied to the brakes to hopefully prevent an impact or at least to reduce the severity of the collision.

There are three trims of the 2020 Toyota C-HR. The LE starts at around $21,000, the XLE jumps to about $23,000, and the Limited is offered for around $26,000. Going with the XLE will give people a leather-trimmed steering wheel, seatback pockets, a Smart Key system with push-button start, and 18-inch wheels. On the Limited, the high-end upgrades includes a special rear bumper, chrome window trim accents, LED headlights, and leather-trimmed seats.

For such a low starting price, it's not a surprise that the LX doesn't come with an exhaustive list of amenities. It does, though, have cruise control, interior lighting, and multiple storage compartments. With the Sport, smartphone integration becomes standard, and this trim has 18-inch wheels and gloss-black side mirrors. The EX has the addition of several driver-assist systems, which can give people a lot of reassurance even if they never or rarely have to be engaged. The EX also has heated front seats to make cold days a little more comfortable.

At the EX-L level, leather seats are the primary enhancement. This trim also has an automatic-dimming rearview mirror and a leather-wrapped steering wheel and shifter knob. The Touring has HomeLink remote technology, navigation, and the standard all-wheel drive system, setting it apart from the other trims.

There are a couple of ways to compare the 2020 Honda HR-V and the 2020 Toyota C-HR. From a performance standpoint, both are at about the same level, but only the Honda offers all-wheel drive. For people in colder climates who frequently deal with slippery roads, this might be a main factor in choosing the Honda.

When looking at the interior space of these vehicles, the Honda comes out on top again. It may not seem like it from the exterior, but the Honda HR-V has larger accommodations for rear-seat passengers and more cargo space. Customers who plan on carrying a full load in their vehicles are sure to pay attention to this point.

Toyota does do well in the technology department, as it has standard Apple CarPlay and Android Auto on all of its C-HR trims. If any new driver is looking for this compatibility in his or her new car and wants to be mindful of the budget, the lowest trim of the Toyota would outshine the entry-level model of the Honda.

Taking everything into consideration, it may be the case that most customers will decide to go with the Honda HR-V. It's capable and nicely appointed. However, some might feel that it's not as edgy at the Toyota C-HR. The C-HR will still be able to draw the attention of many customers, especially those who like its bold appearance and don't mind its smaller cabin.

Save Money on a 2020 Honda HR-V:
Are you Shopping for a New Vehicle? Find the Best Deals with "Free - No Hassle" Prices Quotes.