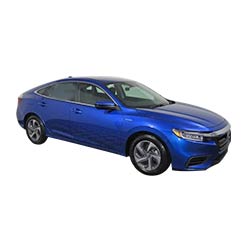 What 2020 Honda Insight Trim Level Should you Buy? What is the Difference Between Trims?

The third generation of the Honda Insight was relaunched in 2019, and the 2020 model year is fairly consistent with the 2019 version.

This guide will help potential buyers determine which trim to purchase. There are three choices: the LX, EX, and Touring. The LX is a basic model that does have some advantages, and on the other end of the spectrum, the Touring is packed with more features.

The 2020 Honda Insight is powered by 1.5-liter four-cylinder engine that works in conjunction with an AC synchronous permanent-magnet electric motor. The main advantage of the Insight is its fuel economy, as it can consistently achieve over 50 mpg. It does so while generating 151 horsepower. The good news is that the lithium-ion battery that the motor runs on can charge itself while driving; this type of hybrid doesn't require any special cords or outlets.

Drivers who want to maximize their efficiency can make good use of the three-mode drive system. ECON and EV are the most energy-efficient settings, with Sport being the option to choose whenever someone wants to feel more power coming from the engine. ECON makes small adjustments to the climate control and throttle system to use less power, and it's fine to use for extended periods of time. EV exclusively relies on electric power, so it can only be used for short distances.

The Insight uses front-wheel drive to be more efficient. In regular conditions where the car can take it easy, the engine isn't relied upon heavily because the electric motor does most of the work. When accelerating quickly or driving on the highway, the engine plays a bigger role.

Power-assisted ventilated front disc brakes are paired with solid rear disc brakes, and the result is a reliable braking system. Some hybrids have a different feel to them when they slow down, but this isn't the case with the Insight. MacPherson front struts and a multi-link rear suspension make the ride smooth because they're able to absorb impact as the car travels over bumps in the road. The driving experience can be an extremely quiet one, since active noise cancellation technology effectively reduces noise coming from under the hood.

Many consumers appreciate that the Insight has a design that doesn't immediately jump out as one that a hybrid would have. It looks like a compact sedan, and it has Honda's familiar curves in the roofline.

With some hybrids, the battery pack takes up valuable space in the trunk. Fortunately, this isn't the case with the Insight. Its battery pack is neatly tucked under the back seats. The trunk has 15.1 cubic feet of storage space. On the Touring, cubic feet is a bit reduced, at 14.7 cubic feet. In all models, the back seat can be folded down to create more storage opportunities.

The car isn't large by any stretch of the imagination, but it still manages to be comfortable. In the front, the driver and passenger get to take advantage of up to 42.3 inches of leg room. Most adults would be fine with the 37.4 inches of leg room in the second row. Two people would likely be happy riding in the back; three would be cozy, though manageable.

Compare the 2020 Honda Insight LX vs EX Trim Levels.  What is the difference?

Both of these trims get an estimated 55 mpg in the city and 49 mpg on the highway. The electric continuously variable transmission feels responsive, and despite the lack of a big engine, the car is fun to drive and can zip around town just fine.

Most of the exterior features are the same in the LX and EX. For instance, they both have automatic LED headlights, LED taillights, and heated power-operated side mirrors that can defrost themselves in the winter.

Where they differ on the exterior is that the EX has a smart entry system. It allows the key fob to stay in a pocket or nearby bag while the driver simply touches the door handle to unlock it. When people walk away from the Honda and have the key fob with them, the vehicle will lock itself automatically. Also, the EX has remote engine start that can be very convenient when someone wants to warm up or cool down the car in the winter or summer.

Inside the cabin of either model, the driver can adjust the seat manually. There are adjustable head restraints and front seat-belt anchors as well, and these little elements can add up to a big improvement in comfort. For the rear seat, the LX has one bench, but the EX has a 60/40 split-bench. This allows for some more flexibility in terms of carrying cargo plus back-seat passengers.

More convenient features are found in the LX and EX. They have remote trunk release for quicker access to the back, various interior lights to make it easier to see, and a push button start. In the EX, the center seatback can be folded down to create a center armrest.

The technology category is where the most differences are seen between the two Insight trims. On the LX, there is a five-inch color LCD screen that drivers can use to control music playback and do a few other things. Bluetooth and Pandora compatibility is standard. Music is broadcast through a 160-watt audio system that has six speakers.

In contrast, the EX has an improved 180-watt system with two additional speakers, and its infotainment system is run through an eight-inch high-resolution touchscreen. A major factor is that the EX has Apple CarPlay and Android Auto integration. It also has a seamless text messaging system, the ability to play HD and SiriusXM Radio, and two 2.5-amp USB ports that can be used for charging and as audio interfaces.

Honda has focused a lot of its attention on safety in recent years, assuming that buyers would want more comprehensive driver-assist features with their new vehicles. The Honda Sensing Suite comes standard with all trims, so a driver can rest assured knowing that an Insight can maintain its course in a lane, brake if necessary to prevent forward collisions, and alert people to anything out of the ordinary. This would include when a driver is starting to veer to one side or another or when the speed limit changes. Adaptive cruise control is a major upgrade from the traditional cruise control because it can change the vehicle's speed as other vehicles slow down or speed up.

Out of these two trims, the EX is the only one to have Honda LaneWatch. This system uses a camera on the passenger-side mirror to display a live video feed. This feed is intended to assist with certain maneuvers. It will only turn on when the right turn signal is on whether a driver is changing lanes, merging, or parallel parking.

Compare the 2020 Honda Insight EX vs Touring Trims.  What is the difference?

The Honda Insight Touring has noticeable differences when compared with the EX. First, it rides on 16-inch alloys versus 17-inch alloys. The Touring is a bit heavier than its counterparts, and therefore its not quite as efficient as the EX. It gets an estimated 51/45 (city/highway) mpg, which is still enviable.

Like the EX, it has the convenient remote engine start, smart entry, and automatic locking features. The Touring stands out as a high-end trim because of its power moonroof. It can be opened with one touch of a button, and it has a tilt feature as well for when someone just wants a bit of fresh air. Additionally, LED fog lights are only present on the Touring.

The Touring's interior definitely feels upgraded over the EX's cabin. This is because it has power-adjustable front seats that come with a heating element. The driver's seat can be adjusted in eight ways, and the passenger's seat can be adjusted in four different ways. Both the front and back seats are trimmed with leather. To match, the steering wheel comes wrapped in leather.

Rather than having the single-zone climate control system that the EX has, the Touring comes equipped with a dual-zone system so the passenger can optimize his or her climate independently of the driver. The rearview mirror is enhanced on the Touring by having an automatic dimming ability that saves drivers from having to deal with bright glare at night. A nice touch is that the car has HomeLink buttons that can act as garage door openers.

More upgrades in the Touring are related to the infotainment system. While it has the same eight-inch screen as the EX, any audio is played over a premium system with 450 watts and 10 speakers. A subwoofer is added on the Touring to provide a richer sound quality.

The Touring can act as a mobile hotspot, which many people will enjoy as they use the fast internet connection on their devices. The Touring comes with built-in navigation that can accept voice commands and adjusts routes for traffic. Another benefit on the Touring is that it's ready for HondaLink Subscription Services. This package connects the vehicle with a driver's smartphone. Through an app on the phone, someone can check on things remotely, such as the vehicle's location, tire air pressure, how much gas is in the tank, and whether the doors are locked. In addition, the driver can look up a location and send it to the car's navigation system through the phone.

The three trims of the 2020 Honda Insight are all competitively priced, but is it worth it to spring for the higher end Touring model? It does have certain luxury elements that some consumer are looking for, such as leather seats, a premium sound system, and a moonroof. Further, it has HondaLink capability, letting people use their smartphones for yet another purpose. Drivers who want something ultra-modern may see these factors as important ones that will guide their decisions.

However, the EX remains a solid choice because of its blend of features and its more attractive price tag. Like the LX, it's optimized to showcase great fuel economy, and it has the basics necessary for comfort. At the same time, it goes beyond what's standard by coming with Apple CarPlay and Android Auto compatibility and being able to play SiriusXM Satellite radio.

At the low end of the spectrum is the LX. What's impressive about this base trim is that its fully equipped with driver-assist safety systems. Because it has Bluetooth and other elements like power side mirrors and LED lights, it doesn't feel exactly like a budget vehicle. That being said, it's certainly missing some conveniences.

When everything is considered, the EX pulls ahead of the other trims. It comes with easy smartphone connectivity and a large touchscreen, which are two things that so many people are interested in these days.
Save Money on a 2020 Honda Insight:
Are you Shopping for a New Vehicle? Find the Best Deals with "Free - No Hassle" Prices Quotes.