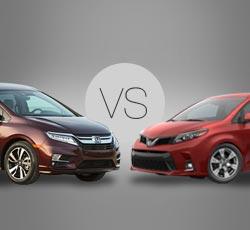 With many families turning toward SUVs, the minivan market has shrunk. Still, those drivers who feel that a minivan is the way to go have some strong remaining options. Both the 2020 Honda Odyssey and the 2020 Toyota Sienna have large fan bases and many features that make them appealing.

The Odyssey is considered by many to be fun to drive. It has a spacious cabin that is full of comfortable seats. Also in its list of pros is the user-friendly infotainment system that has the latest features out there for making life more convenient.

On the other hand, the Sienna also has a comfortable cabin. It also has a long list of standard driver aids and more standard tech features. Plus, unlike the Odyssey, it is available with all-wheel-drive.

The Odyssey entered a new generation in 2018, giving it a more modern look and feel. As for the Sienna, it has not had a remodel since back in 2011. Unsurprisingly, this vehicle is starting to look a little dated, especially when compared to the Odyssey.

So which is the better choice for today's families? To decide, buyers should be aware of how these two vehicles look when stacked up against each other. This guide will do exactly that, comparing the 2020 Odyssey and the 2020 Sienna in all of the most important areas.

Each and every model of the 2020 Honda Odyssey has a 3.5L V6 engine underneath the hood. This engine is capable of generating 280-horsepower along with 262 lb-ft of torque. The standard ten-speed automatic transmission keeps the minivan shifting smoothly. Front-wheel-drive is the only option for buyers here.

As for the 2020 Toyota Sienna, it also has a 3.5L V6 standard across the board. It even generates a similar amount of power. Drivers will be looking at 296-horsepower with 263 lb-ft of torque if they choose this option. The Sienna has an eight-speed automatic transmission. While front-wheel-drive is standard, all but the entry-level model can also be had with all-wheel-drive.

Although it is unlikely that many drivers will be flooring it in their new minivan, it is worth knowing that the Odyssey is a bit quicker off the line. The Odyssey can make it from 0-60 in about 6.6 seconds. As for the Odyssey, it needs 7.1 seconds to accomplish this. This is somewhat surprising considering the fact that the Sienna has slightly more horsepower and torque.

Both of these minivans can tow up to 3,500 pounds when they are properly equipped. Test driving either vehicle will prove that their respective engines are more than enough. That said, the ten-speed automatic transmission found in the Odyssey makes it a more responsive than the Sienna with its eight-speed automatic.

Fuel efficiency is another area where these two vehicles are very similar. The Odyssey does have a slight edge, however. This option will give drivers 19mpg in the city and 28mpg on the highway. The Sienna with front-wheel-drive will also give drivers 19mpg in the city but goes down to 26mpg on the highway. Going with all-wheel-drive does not impact fuel economy much. These models of the Sienna get 18mpg city along with 24mpg highway.

The gas tank of the Sienna is just a hair larger than that of the Odyssey, with the first having a 20-gallon tank and the second having a 19.5-gallon tank. At the same time, the Odyssey is just a tad more efficient. As a result, these two vehicles will likely have to stop and fill-up at an equal rate.

Additionally, the two vehicles offer up identical warranties. Either option gives buyers three years and 36,000 for basic and five years and 60,000 miles for the powertrain. It is worth noting that the Sienna has a predicted reliability rating of four out of five stars from J.D. Power. The Odyssey received only three out of five stars in that category.

Both the Odyssey and the Sienna have either seven or eight seats, depending on the model and options selected. It is easy for passengers to access the second and third rows of seating in either option. The Odyssey has a slight edge here, however, due to its "Magic Slide" second-row, which greatly increases the versatility and practicality of the vehicle.

In the Odyssey, adults are likely going to find all three rows of seating comfortable. The Sienna, on the other hand, has cramped head room in the third-row due to its sloping roof. As a result, children are the only ones who can sit back there for any length of time comfortably. Both vehicles offer nicely cushioned seats. The Odyssey, however, offers more support and will be easier to ride in for long periods.

Cargo space is a close race between these two. Both offer roughly 39 cubic feet behind the third row of seating. Behind the first row, the Sienna gives drivers 150 cubic feet and Odyssey drivers 158 cubic feet. Additionally, the Sienna requires the second-row of seating to be removed entirely in order to reach the maximum cargo capacity. As a result, the Odyssey comes out ahead when comparing cargo space.

As far as how it feels on the road inside these options, both will provide families with a smooth ride on nearly all road surfaces. Neither lets in much road noise, either, making this factor unimportant when deciding between the Odyssey and the Sienna. The driver, on the other hand, is much more likely to enjoy driving the Odyssey with its responsive handling and steering.

The infotainment system of either minivan is relatively easy to use. It is worth noting that the base Odyssey only gives buyers a 5-inch screen, however. All other models jump up to 8-inches. At the same time, a 7-inch touchscreen is standard across the board for the Sienna. Upper trim levels of both vehicles can be equipped with a rear-seat entertainment system.

Android fans will want to avoid the Sienna. While it comes standard Apple CarPlay, Android Auto is not available at any trim level. All models of the Odyssey with the 8-inch screen have both smartphone integration features standard. Bluetooth is standard for all versions of both of these minivans.

The Odyssey further distinguishes itself with features like CabinTalk and CabinWatch. With the first, drivers can speak to back passengers through the rear speakers. The second feature actually allows front passengers to keep an eye on whats going on in the back through the touchscreen. While the Sienna does have an in-cabin PA system similar to CabinTalk, it does not offer anything like CabinWatch on any trim level. The Odyssey also comes with a built-in vacuum on upper trims, something that is sure to appeal to parents with small children.

In the plus column for the Sienna is the fact that all models are equipped with a Wi-Fi hotspot. In order to have that feature for the Odyssey, buyers will have to go all the way up to the Touring trim level. This trim costs nearly $45,000 and may be more than many families are willing to spend.

Safety is one area where it is difficult to declare a clear winner between the 2020 Odyssey and the 2020 Sienna. On the one hand, the Odyssey received five stars from the National Highway Traffic Safety Administration in frontal and side crash tests. In rollover testing, it received four stars. The Sienna only got five stars for side crash testing. It received four stars for frontal and rollover.

On the other hand, the only standard driver aid for the Odyssey is a rearview camera. All models of the Sienna come with Toyota Safety Sense P bundle of driver aids. Within this group are features lie adaptive cruise control, lane departure warning, lane-keep assist, pedestrian detection, and a pre-collision braking system. Select models further add a blind-spot monitor, surround-view camera system, rear cross-traffic alert, and parking sensors.

Odyssey fans should not despair. Stepping up from the entry-level LX to any other trim adds Honda Sensing. This suite has the same features as the Sienna, plus road departure warning. Active park assist is also available for the Honda Odyssey.

These two minivans tie yet again when it comes to airbags. Either option will give drivers a grand total of eight. These include side-curtain airbags with roll-sensors for all three rows.

The 2020 Honda Odyssey and the 2020 Toyota Sienna sit at very similar price points. Neither of these minivans are cheap in comparison to other competitors. That said, buyers can get the Sienna for a lower price. Its starting point for an entry-level model is $29,745. The cheapest Odyssey buyers will find is $30,171.

The Odyssey Elite, which is the top trim for this vehicle, costs $47,320. Going with the Sienna Limited Premium will cost over $49,000 if a buyer decides to add all-wheel-drive. Consumers who prioritize all-wheel-drive will find that it is worth a little extra.

Cost of ownership estimates have the Odyssey coming out ahead. Over five years time, the entry-level Odyssey is expected to cost drivers around $8,000. When looking at the entry-level Sienna, estimates have it costing $10,000 dollars in its first five years. This is partially due to fuel economy. These estimates are based on the vehicle being driven approximately 15,000 miles per year.

It would be easy to call the Sienna the better value here. After all, its entry-level model has all those tech and safety features missing from the Odyssey. However, jumping up to the Odyssey EX, which is the second trim, is ultimately going to be the better deal. This trim costs just over $35,000, but has a couple extra safety features, a more comfortable cabin, and a larger touchscreen than there is available on any Sienna.

Picking between these two minivans is a tough call. Ultimately, the smooth ride and comfortable seats of the 2020 Honda Odyssey have it coming out ahead. As long as drivers are willing to pay a little more and skip over the entry-level model, they'll find this minivan is very well equipped and perfect for families. This is also the better option for those who want as engaging of a drive as possible out of their minivan. Keep in mind, however, that any buyer who has their heart seat on an all-wheel-drive minivan will need to go with the Sienna, as that is a class-exclusive feature for the vehicle. Those who are hoping to stick with an entry-level model are also going to be much happier in the Sienna than they would in the Odyssey.

Save Money on a 2020 Honda Odyssey:
Are you Shopping for a New Vehicle? Find the Best Deals with "Free - No Hassle" Prices Quotes.