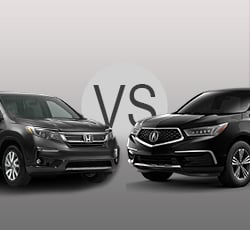 Many of today’s drivers prefer a three-row SUV over a traditional minivan. While the segment is extremely competitive, the Honda Pilot remains a top-selling model. Families appreciate the Pilot’s versatile interior and excellent value. Although Honda didn’t make any significant changes to the 2020 Pilot lineup, a stylish Black Edition trim has arrived.

The 2020 Acura MDX, which is also produced by Honda, is another highly regarded midsize SUV. Although the MDX is built with the comfort of your family in mind, it’s also a fun vehicle to drive. A modern exterior design further separates the MDX from its closest competitors. Let’s find out how the 2020 Honda Pilot measures up to the 2020 Acura MDX.

Motivating the 2020 Honda Pilot is a tried-and-true 3.5-liter, SOHC V6 engine. The latest version of this engine is rated to develop 280 horsepower and 262 horsepower. While a six-speed automatic transmission is standard, upper trims receive a more modern nine-speed gearbox.

A similar V6 engine is featured on the 2020 Acura MDX. However, it’s engineered to deliver a more muscular performance. Acura tweaks this engine to develop 290 hp and 267 lb-ft of torque on premium gas. Sending power to the MDX’s wheels is a nine-speed automatic transmission.

A second powertrain is also available for the MDX. The MDX Sport Hybrid uses a smaller V6 engine, which combines with three electric motors to develop 321 hp and 289 lb-ft of torque. A special dual-clutch automatic transmission comes standard.

When test driving these SUVs, the 2020 Acura MDX proves to be only slightly quicker. It clocks a 0-60 mph time of 6.3 seconds. By comparison, drivers can expect the 2020 Honda Pilot to accelerate to 60 mph in 6.6 seconds. Folks who demand maximum performance will be happier with the MDX Sport Hybrid, which sprints to 60 mph in 5.7 seconds.

In terms of towing capabilities, there’s no real difference between these SUVs. Both are rated to haul up to 5,000 pounds of cargo. This means they should have no trouble moving average-sized fishing boats and small campers. Front-wheel-drive models have a lower tow rating of 3,500 pounds.

Both of these SUVs will deliver an admirable performance during wintry weather. Available all-wheel drive will help ensure more traction in the snow. However, neither crossover is recommended for traveling on rough terrain. An off-road package is not on the list of options.

The Acura MDX has a very effective braking system. This is especially true for the Sport Hybrid model. It posted an excellent 60-0 mph braking distance of 111 feet. While the Honda Pilot doesn’t stop quite as quickly, its brakes do work well. According to tests, the Pilot takes around 120 feet to come to a complete stop from 60 mph.

The Pilot is widely considered to be one of the most nimble three-row SUVs in its class. However, driving enthusiasts will find the MDX to feel even more poised. Acura’s available Super Handling All-Wheel Drive system features torque-vectoring technology, which can alter the amount of torque sent to each individual wheel. When taking curves in the MDX, drivers will notice its athleticism.

When it comes to long-term reliability, the Pilot has a small edge over the MDX. Aside from having a lower cost of repairs, it also scored a 3.5 out of 5.0 rating in J.D. Power’s dependability study. This is an above-average rating for the segment. However, most people will not find the MDX’s 3.0 out of 5.0 dependability rating to be a big disappointment.

Automotive journalists were pleased with the 2020 Honda Pilot’s smooth ride. However, upgrading to the Pilot’s 20-inch wheels result in a stiffer ride. While the 2020 Acura MDX’s standard suspension is also smooth. Adaptive suspension dampers are found on the Sport Hybrid model, thus further enhancing ride control.

The Honda Pilot is quiet on the inside. Active noise cancellation helps minimize outside disturbances. Car shoppers will also find the more luxurious Acura MDX to be a quiet SUV. However, the A-Spec package’s wider performance tires do produce more road noise.

Drivers who need to seat the most passengers will favor the Pilot. It has the ability to accommodate up to eight people. Meanwhile, the MDX can seat a total of seven passengers.

Taller drivers may find the MDX to be a bit more rewarding. It provides an additional 0.5 inches of legroom in the front. The MDX’s front seats also feel more luxurious. Nevertheless, both SUVs offer heated and ventilated front seats.

Concerning outward visibility, the Pilot ranks among the best models in the segment. Excellent front and rear visibility enable drivers to gauge potential road hazards. While the Pilot does have a few rear blind spots, they are not terribly distracting. Meanwhile, an elevated driving position also enables the MDX to offer a superior view out of the front windshield.

One of the most obvious interior differences between these SUVs is their infotainment systems. Acura’s interface features dual touchscreens. While some drivers love the design, others will prefer a more simple system. Drivers seeking ease of use will likely prefer Honda’s available Display Audio touchscreen. However, the Pilot’s standard infotainment system is extremely dated. Many people will find the unit’s 5.0-inch display to be entirely too small.

Navigation is optional. Both units provide readable maps. The voice control systems also understand natural language, which proves to be a timesaver.

The 2020 Honda Pilot was given with a solid, five-star overall safety rating. Not only did the 2020 Acura MDX also receive a five-star overall rating from the federal government, but it also provides even better side-impact protection. Many parents will appreciate the elevated level of security.

With the Acura MDX being a Honda product, it’s no surprise that these vehicles have a similar list of safety technologies. Some of the standard driving aids included forward collision intervention, lane keeping assist, and smart cruise. A feature that helps prevent you from unintentionally veering off the pavement is also included on both the Pilot and the MDX.

A blind-spot monitor is optional, which warns you of traffic approaching from the rear. Parking sensors are optional as well. There are a few features that are only offered on the Acura MDX. While a surround-view camera enhances visibility, an available head-up display puts the speedometer's info in the driver’s direct line of sight.

What has the Best Value?

Honda has given the Pilot a starting MSRP of $31,550. By comparison, the new MDX starts at roughly $44,400. It’s clear which SUV will save car shoppers the most money.

However, it’s important to note that the MDX is a more luxurious model. The base Pilot is missing some key features. Drivers are forced to go without a modern touchscreen. Honda’s standard infotainment system also doesn’t support Apple CarPlay or Android Auto smartphone connectivity. Some of the MDX’s other standard conveniences include three-zone automatic climate control, satellite radio, and a 12-way power driver’s seat.

The most luxurious version of the Pilot is its Elite trim, which demands a little more than $48,100. It has some nice upgrades, including a Wi-Fi hotspot and heated second-row seats. A 10-speaker stereo is another noteworthy feature.

With a starting MSRP of more than $60,000, the fully loaded MDX is a lot more expensive. It also has a more luxurious atmosphere. Kids will love the rear entertainment system, which allows them to view movies and play video games on a 16.2-inch HD screen. While the Pilot also offers a rear entertainment unit, the screen is smaller.

Both of these three-row crossovers are fine picks. However, some car shoppers may favor one more than the other. From a standpoint of cost, the 2020 Honda Pilot is more affordable. It’s ideal for drivers who don’t need a luxury model. Choosing the MDX will force buyers to invest a lot more money. Acura also designed the MDX's engine to use 93 octane, which is another fact to consider.

If exterior styling is a big factor, the Acura MDX wins this battle. It has a more exciting look. Acura’s optional A-Spec appearance package really helps the MDX to draw attention. This package brings wider 20-inch wheels and larger exhaust tips. Expect the Pilot to look more like a traditional family vehicle. However, many drivers will like the all-new Pilot Black Edition's appearance.

In terms of performance, the Honda Pilot provides a strong enough punch for most people. Not only is the Pilot nearly just as quick off the line, but it also matches the MDX’s maximum towing capacity. However, Acura’s Super Handling All-Wheel Drive system gives the MDX another degree of driving fun. Although the MDX Sport Hybrid is more costly, it brings more power and extra fuel savings.

Drivers who need to haul a couple of extra children to soccer practice will be happier with the Honda Pilot. Its third row provides noticeably more leg space. With that said, the Acura MDX’s other two rows are spacious. Cargo space is nearly even.

While the 2020 Honda Pilot is hands-down the best value, the 2020 Acura MDX is the better overall vehicle. It’s more enjoyable to drive, offers a couple of extra safety features. and feels more luxurious. On the downside, some people may not be able to afford the MDX’s steeper price. Drivers who prioritize practicality over luxuriousness will find the Pilot to be a great choice.