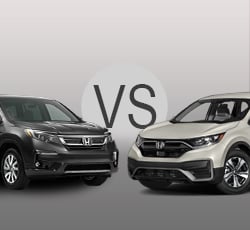 Mid-size SUVs have become very popular in recent years. It makes sense, given their practicality and versatility. People who are interested in these qualities often look to major automotive brands when shopping for new vehicles, and Honda is one of the leaders in the industry. Two of its SUVs fall within the mid-size category: the Honda Pilot and the Honda CR-V. They are solid choices if anyone is interested in getting a relatively affordable model that comes with many modern elements.

Before getting down to all of the details related to how these two Honda SUVs compare with each other, it may be helpful to provide a brief overview. The CR-V is more compact than the Pilot but not by much, and the Pilot has a larger and more powerful engine. Importantly, the Pilot has three rows of seating that lets it accommodate up to eight people. The CR-V is a traditional two-row SUV with room for five total passengers.

The Pilot starts out with the LX trim and then moves up to the EX and EX-L. The Special Edition has some unique elements to it and sits in the middle of the pack. The Touring, Elite, and Black Edition are the premium trims that have plenty of luxury features.

The CR-V has the same three trims that are at the lower end of the Pilot lineup. The CR-V trim choices end with the Touring. At each of the four levels, there is a hybrid version offered as well.

Just looking at the two SUVs side by side is enough to give people a good idea of how they differ from each other. The Honda Pilot has an overall length of 196.5 inches, while the CR-V is about 182 inches long. The height of the Pilot is 70.6 inches, compared with up to 66.5 inches inn the CR-V. 78.6 inches is the distance from one side of the Pilot to the other, and this distance is 73 inches in the CR-V.

Interestingly, ground clearance in the CR-V is greater than that of the Pilot. The CR-V sits 7.8 or 8.2 inches off the ground, depending on whether the vehicle is 2WD or 4WD, whereas the Pilot has a ground clearance of 7.3 inches.

How do all of these numbers translate into how things feel inside the cabin? Well, people in the front row of either SUV will have nearly the same amount of leg room and head room. The back row of the CR-V feels quite spacious, with 40.4 inches of leg room. In fact, this number may be hard to beat when looking at vehicles in the same class.

The Pilot has a bit less second-row leg room, at 38.4 inches, and its back seat only offers 31.9 inches of leg room. This may be practical for children, but many adults would be uncomfortable spending long periods of time back there. Since the Pilot is wider than the CR-V, people don't have to sit so close to each other, and this could be appreciated when driving a full load of people.

SUVs are known for their cargo space, and the Pilot and CR-V are great examples of how much these kinds of vehicles can carry. The CR-V has a dedicated cargo space that measures 39.2 cubic feet, and when the rear seats are lowered, total cargo volume can be up to 75.8 cubic feet. In the Honda Pilot, the cargo space behind the third row is small, measuring just 18.5 cubic feet. Lowering the third row creates a storage space that can hold 55.9 cubic feet, and folding down the second and third rows can expand the cargo area to an impressive 109 cubic feet.

The Pilot doesn't just have more space than the CR-V; some of its stylistic elements are also a bit more refined. For example, LED headlights are standard with the Pilot but not with the CR-V, in which they are only offered with select trims. The Pilot Elite is the only trim out of the bunch to have a panoramic roof, and the Pilot has LED lights in the back but the CR-V doesn't. Both vehicles do have available LED fog lights and power tailgates, with the top trims coming with hands-free access.

When looking at the overall aesthetic in each SUV, things are quite similar. Most trims of the Pilot and CR-V don't have any elements that would immediately stand out in a crowd. Remember, though, that the Pilot has the Special Edition, Elite, and Black Edition. These really shine with elements such as power-folding side mirrors and chrome or gloss black door handles, things you might see on high-end vehicles.

The Honda Pilot is definitely the model to get if one is particularly keen on getting a higher performing engine. It runs on a V6 that has a displacement of 3.47 liters. This engine gives drivers 280 horsepower and 262 pound-feet of torque. This is a respectable amount of capability and results in a towing capacity of 3,500 pounds for 2WD models and 5,000 pounds for 4WD models.

With the Honda CR-V, the engine is much smaller. It's a 1.5-liter turbocharged version with four cylinders and 190 horsepower. Torque is 179 pound-feet of torque, and towing capacity is 1,500 pounds. In a head-to-head competition with the Pilot in this category, the CR-V doesn't win. For many consumers though, it really doesn't have to. The fact remains that while the CR-V doesn't have a tremendous amount of capability, it certainly has enough to please an average driver.

The non-hybrid CR-V clearly wins the battle in fuel economy, and the hybrid version is even more efficient. Because the hybrid uses an in-line four-cylinder gas engine in combination with an electric motor, it can earn up to 35 miles per gallon on the highway and 40 miles per gallon in the city. Power isn't sacrificed by any means, as it has it has a 212 net horsepower and 232 pound-feet of torque.

The handling in both the Honda Pilot and CR-V is quite smooth. Active Noise Cancellation technology keeps the cabin quiet, there are several systems in place to maintain traction as much as possible, and shifting seems effortless.

Both SUVs feel comfortable, even if a base trim is selected. In terms of seating, the CR-V starts out with a manually adjustable driver's seat, cloth upholstery, and an automatic climate system. Upgrades on higher trims include leather seats, power-adjustable front seats with heating elements, a heated and leather-wrapped steering wheel, dual-zone climate control, and ambient lighting.

Many of these features seem to be taken one step further on the Pilot. For instance, its higher trims have power-adjustable driver's seats that have power lumbar support and two-position memory, and its second row seats can be moved with the touch of a button, the front seats can be heated and ventilated. Further, there is an available tri-zone climate system, and the second-row seats can be heated. Lower trims of the Pilot have benches in the middle row to fit three people, and higher trims have captain's chairs to bring the total seating capacity to seven. Also, the Pilot has push button start as a standard component across all trims; this feature is missing in the base model of the CR-V.

Technology is often a key component when making a decision regarding a new vehicle these days. Fortunately, these Honda SUVs offer packages. That is, as long as one gets something other than the LX trims.

The CR-V LX isn't totally antiquated, as it still has Bluetooth, Pandora, four speakers, a USB port, and a five-inch LCD screen. However, all of the other trims have seven-inch touchscreens, Apple CarPlay and Android Auto, at least six speakers, SiriusXM and HD Radio, and more advanced USB ports. The Touring comes with wireless charging, and nine-speaker audio system, and a satellite-linked navigation system that has voice recognition technology.

Likewise, the Pilot LX has a five-inch LCD screen. If technology isn't very important to a particular driver, this shouldn't be an issue. If someone is looking for an advanced infotainment system, the other trims will be much more appealing. They all have eight-inch touchscreens and the other components that the higher CR-V trims have. In addition to having navigation, the Pilot's Touring and higher trims have a rear entertainment system that includes a 10.2-inch screen and Blu-ray player that can attract families with kids. The higher Pilot trims have 10 speakers, Wi-Fi hotspot capability, the ability to accommodate different zones in terms of audio playback, and in-car PA systems that can work through the speakers and/or headphones.

These vehicles both do very well in the area of safety. They sit on well-built frames that are durable and strong, and in case the conditions make driving difficult, the models have several systems that can make necessary adjustments to improve stability, traction, and control. In the case of an accident, airbags can deploy to protect passengers, and there are three-point seat belts in all positions.

Driver-assist systems are essentially identical in these two Honda SUVs. All trims of the CR-V and Pilot have Honda Sensing technologies. This technology suite include adaptive cruise control, lane keeping assist, and road departure mitigation. Two very important elements are the collision mitigation braking system and forward collision warning, which can alert drivers when they're approaching other vehicles too quickly. If drivers don't have a chance to respond in time, the SUVs can apply pressure to the brakes on their own.

Up until this point, pricing hasn't been mentioned. The Pilot has simply been presented as the larger and more powerful SUV, with more high-end interior elements. However, it does come at a greater cost. There's about a $6,000 or $7,000 price difference between the CR-V and Pilot when comparing the equivalent trims.

For some, this extra cost is totally worth it, since it comes with a third row of seating and more capable powertrain. Plus, there are some more elegant details included in the Pilot's premium trims. For other consumers, the benefits of the Pilot aren't justified; perhaps they don't need all of that interior room or the generous amount of horsepower, or maybe they're more budget-oriented.

In the end, size and pricing will be the biggest factors in deciding whether to get a 2020 Honda Pilot or Honda CR-V.

Save Money on a 2020 Honda Pilot:
Are you Shopping for a New Vehicle? Find the Best Deals with "Free - No Hassle" Prices Quotes.