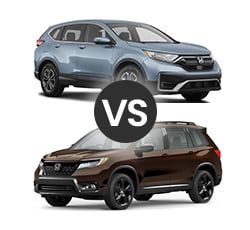 2021 CR-V vs Passport - How do they stack up? What are the differences?

Automotive experts consider Honda’s SUV lineup to be one of the best on the market. Many car shoppers will be choosing between 2021 Honda Passport and the 2021 Honda CR-V. While both of these crossover SUVs are highly recommended family vehicles, one may appeal to you more than the other. In this head-to-head comparison, we will break down the similarities and differences between these popular Honda models.

When comparing these two SUVs in person, car shoppers will immediately notice a difference in size. The midsize Honda Passport is about 8.4 inches longer than the compact Honda CR-V. It’s also wider than the CR-V. Because of the CR-V’s smaller stature, some drivers will find it to be a more suitable city vehicle. This is especially true for commuters who must often park in tight spots. While the Passport tips the scales at more than 4,000 pounds, the CR-V weighs in at roughly 3,500 pounds.

The 2021 Honda Passport has a more rugged look. This SUV's adventurous design is further highlighted by its raised ride height. Many Honda fans love this SUV’s sporty front fascia and blacked-out exterior treatments. Even the base Passport comes equipped with 20-inch alloy wheels, which promote an athletic stance. LED headlights are standard on every trim.

Expect the 2021 Honda CR-V to look a bit less macho than the Passport. However, it’s still a stylish vehicle. To get the CR-V with LED headlights, buyers must step up to the range-topping Touring trim. Although Honda doesn’t offer any special appearance packages for the CR-V, upraded wheels are found on the hgher trim levels.

Like its larger stablemate, the CR-V is designed to haul up to five people. While the Passport has a maximum passenger volume of nearly 116 cubic feet, Honda lists the CR-V with a total passenger volume of around 106 cubic feet. Although the CR-V does not provide as much rear hip room, it does offer just a tad more legroom in the front and rear.

When it comes to outward visibility, the Passport and the CR-V are evenly matched. Drivers can look forward to experiencing an unobstructed view of the road. Although there are naturally a few rear blind spots, most drivers will not have any major complaints.

Automotive journalists also praise the 2021 Honda CR-V for its responsive nature. It’s put into motion by a turbo four-cylinder engine, which squeezes out 190 hp and 179 lb-ft of torque. To further improve gas mileage, the CR-V uses a continuous variable transmission. Although this gear-less transmission may not be quite as engaging as a traditional one, it always feels responsive during real-world driving situations..

In terms of acceleration, the Passport dashes to 60 mph in around 6.1 seconds. This SUV climbs hills and merges onto the interstate with ease. Despite the CR-V’s less powerful engine, it still manages to offer brisk acceleration. Drivers can trust the CR-V to deliver a 0-60 mph time of around 7.5 seconds. Although the CR-V is speedy enough for most motorists, there’s no overlooking the Passport’s enhanced performance capabilities.

Unfortunately, the CR-V is not the best SUV for towing campers and recreational boats. It’s only designed to handle up to a 1,500-pound load. On the other hand, Honda rates the AWD-equipped Passport to tow up to 5,000 pounds. Passport trims that feature a front-wheel-drive system have a 3,500-pound tow rating.

When it comes to fuel economy, the CR-V is a step ahead of the Passport. It’s rated by the federal government to return a very frugal 28 mpg town/34 mpg freeway. Opting for the CR-V’s AWD system slightly lowers efficiency to 27 mpg town/32 mpg freeway. Fuel economy estimates for the Passport stand at 20 mpg town/25 mpg freeway. Both SUVs are tuned by Honda to use regular unleaded gasoline.

Drivers rave about the CR-V’s excellent road-holding capabilities. It’s far nimbler than a truck-based model. The Passport also offers confident handling. This SUV’s wide stance helps keep it balanced around curves. However, a higher ride height puts it a notch behind the lighter and slightly nimbler CR-V. Some test drivers have also found the Passport to have a numb steering feel.

Like the CR-V, the Passport delivers a well-mannered ride. It comes ready to eat up long stretches of interstate. However, expect the CR-V’s to be just a bit more supple.

Of these two vehicles, the 2021 Honda Passport is the most rugged. An optional torque-vectoring system and extra ground clearance help to Passport to perform better on muddy trails. Honda’s Terrain Management system also aids the Passport’s ability to handle the rural backcountry. Despite not being a great vehicle for off-road use, the 2021 Honda CR-V does fare well in the snow. All-wheel drive is offered on every new CR-V trim.

The Passport and the CR-V are equally quiet on the inside. Passengers will be able to enjoy a peaceful trip. Even at highway speeds in excess of 70 mph, wind noise remains low. An Active Noise Cancellation system comes standard.

During emergency braking tests, the Honda CR-V performed well. When traveling at a speed of 60 mph, it took the crossover 115 feet to come to a complete stop. Meanwhile, road tests show the Honda Passport has a 60-0 mph braking distance of 128 feet. While the Passport’s brakes feel strong, drivers won’t be able to stop as quickly.

In terms of overall comfort, the 2021 Honda Passport and the 2021 Honda CR-V prove to be a close match. Both feature well-cushioned seats. These SUVs are great for local commuting and long-distance road trips.

Among the CR-V’s standard creature comforts include a reclining backseat, which helps rear passengers to relax. Higher trim levels offer front-seat heating, a heated steering wheel, and dual-zone automatic climate control. Buyers also have access to hands-free liftgate. A couple of additional luxuries come standard on the Passport, including tri-zone automatic climate control. Available ventilated front seats and heated rear seats give the Passport another advantage over the CR-V.

Some desirable technologies are available for the CR-V. Unfortunately, this SUV’s standard infotainment system is quite basic. It features a dated, 5.0-inch display. To get a 7.0-inch touchscreen with the latest smartphone integration technologies, CR-V buyers must skip the base model. Wireless charging, a 9-speaker premium stereo, and navigation are also offered.

White both of these SUVs are considered to be a good value, the 2021 Honda CR-V is more affordable. Prices for the latest CR-V begin at $25,350. By comparison, Honda gives the Passport a starting MSRP of $32,790.

The 2021 Honda CR-V also took home a five-star overall safety rating from the federal government. In contrast to the Passport, it was named an IIHS Top Safety Pick.

Both of these vehicles provide the essential safety features. A total of six airbags and a backup camera come standard. Honda Sensing, which is a collection of active safety technologies, is also found throughout the lineup. Among these driver-assistance features include automated emergency braking, lane-departure prevention, and adaptive cruise control. Road departure mitigation is also featured on these SUVs, which helps prevent drivers from wandering off the paved road surface.

Blind-spot warning with rear cross-traffic detection is on the list of options. This safety technology makes drivers aware of unseen motorists.

Fuel economy is another element that car shoppers must think about. CR-V drivers can anticipate spending a lot less money at the pump. This is especially true if they commute on a daily basis.

When it comes to sheer power, the Honda Passport outclasses the Honda CR-V. Its muscular V6 engine feels potent. Not only does the Passport offer noticeably quicker acceleration, but it also has a much higher tow rating. With that said, most people will have to no issues to the CR-V’s amount of get-up-and-go. Furthermore, motorists will enjoy the CR-V’s sharp driving dynamics.

Folks who prefer an outdoor lifestyle will lean more towards the Passport. Although the Passport doesn’t have the off-road capabilities of the Jeep Grand Cherokee, it is more rugged than the CR-V. A specialized AWD system and extra ground clearance help make the Passport great for traveling off the beaten path.

From a standpoint of interior comfort, these family-friendly SUVs are evenly matched. They both provide a more than sufficient amount of legroom. There’s also plenty of luggage space for travelers. However, the Passport does offer a few more creature comforts. Ventilated front seats and heated rear seats are not offered on the CR-V.

While styling is often a matter of personal preference, many people like the Passport’s rugged look. Its blacked-out exterior accents add a cool touch. While all versions of the Passport received LED headlights, only the range-topping CR-V Touring provides upgraded LED headlights.

These SUVs offer a similar number of in-vehicle technologies. However, the CR-V’s standard infotainment system is behind the times. Most people will be much happier with Honda’s modern touchscreen interface. It's not offered on the base CR-V LX.

In summary, the 2021 Honda Passport is the best choice for outdoor lovers. It also packs more muscle under the hood, which promotes stronger acceleration and enhanced towing capabilities. On the other hand, budget-minded drivers may find the CR-V to be a more practical option.