2021 Honda Civic Sedan Pros vs Cons. Should You Buy? 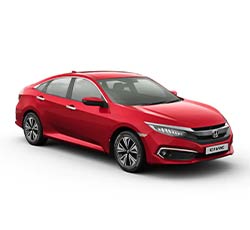 Should You Buy a 2021 Honda Civic Sedan? Here Are Some Reasons For and Against

Honda has rightfully earned its reputation for building reliable and practical vehicles. The 2021 Honda Civic Sedan is a perfect example of a model that makes sense on so many levels. It's ideal for many people who prefer driving a compact sedan, and it comes with several advantages. It's hard to believe, but the 2021 model year is part of the 10th generation of Civics. This illustrates the long-lasting success of the Civic, and it's likely that this trend will continue.

There really hasn't been any significant change to the Civic Sedan. For 2021, the only notable thing is that the sporty Si trim has been dropped.

The Honda Civic, with its compact size and aerodynamic body, has an appealing look. Its angles and curves have all been carefully thought out. Unlike some compact sedans that wouldn't seem that desirable to younger buyers, the Civic can attract attention from all age groups. The rear spoiler on some of the trims helps in this regard.

Even though SUVs seem to be gaining in popularity, there's still considerable demand for smaller vehicles. With a height of under 56 inches and a wheelbase of just over 106 inches, the Civic can please a lot of people. Its size makes it great for people who live in urban areas who commonly have to squeeze into tight parking spaces. At the same time, it's not so small that it becomes unreasonable to take on long road trips.

3. Choose What's Under the Hood

The first two trims of the Civic, which are the LX and Sport, run on in-line four-cylinder engines. These are 2.0-liter versions that can generate a little more than 150 horsepower and just under 140 pound-feet of torque. This is a sufficient amount of capability for most situations, but there's another option for people who want more capability.

On the top three trims, which are the EX, EX-L, and Touring, there are turbocharged engines. Being an in-line four-cylinder engine, it shares some qualities with the standard engine, but it has a displacement of 1.5 liters. Its turbocharger gives much more power, increasing horsepower to 174 and torque to 162 pound-feet.

The new Honda Civic does very well in the fuel economy department. On the highway, it can travel up to 42 miles on a single gallon of gas. Even when driving in the city, people could earn up to 32 miles per gallon. These are exceptional numbers. Given many people's concern over fuel consumption and the long-term costs associated with driving, this is sure to help the Civic Sedan stand out. It's not too far of a stretch to compare the Civic against some hybrids, as its efficiency is just that good.

Every one of the five Civic trims comes with Honda Sensing technology. The Honda Sensing package includes various monitoring and mitigations systems that continually work to help drivers avoid accidents. For example, if someone is approaching another vehicle too quickly, a warning will be given and the car could hit the brakes if the driver doesn't respond in time. The Civic can also warn someone when he/she is starting to drift out of a lane (without using a turn signal). The car could gently correct the steering if this seems necessary.

In most trims of the Honda Civic, SiriusXM and HD Radio are standard. These can really expand the radio channels that are available, and they're all high-quality channels as well. There's the opportunity to stream music and listen to downloaded songs since all trims have Bluetooth and nearly all of the trims have Apple CarPlay and Android Auto. While the base model has a basic sound system, music lovers will be happy to know that the Sport, EX, and EX-L have eight-speaker sound systems and that the Touring has a 450-watt audio system with ten speakers. One of those speakers is a subwoofer that can enhance the low notes.

8. Find Comfort in the Cabin

The two rows of seating in the Honda Civic feel fairly spacious. Leg room in the front is 42.3 inches, and in the back it's 37.4 inches. The front seats can be heated and power-adjustable, and leather seats are included with the EX-L and Touring. These two trims feel more upscale than the rest and would be something to consider if anyone is interested in a more refined car.

An automatic climate system is standard, and on the higher trims it's upgraded to a dual-zone temperature control system.

Most people who are looking at compact sedans like the Civic are probably not planning on loading up bulky pieces of gear in their cars on a regular basis. However, it can be nice to have the ability to do so, on occasion. The Honda Civic can come with a 60/40 rear seatback, and when one or both sides are folded down, people can more easily accommodate larger items.

Gadgets and technology are fun, even if they're aren't always necessary. In the Civic, there are some available elements that can be used on a daily basis to improve the quality of the ride. First, an automatic-dimming rearview mirror can be very much appreciated when the driver behind the Civic is shining bright lights into the mirror. In addition, the HomeLink remote can be programmed to open up garage doors, turn on/off security systems, and potentially control other lighting systems in the house.

Navigation is standard on the Touring trim, and this is a big draw. Navigation is very useful, not only when trying to find new destinations but also when trying to avoid traffic. The Civic's navigation program comes with voice recognition and Honda HD Digital Traffic.

Reasons Not to Buy a 2021 Honda Civic Sedan – The Cons

1. Base Model Doesn't Have Smartphone Connectivity

It's unfortunate that the LX doesn't come with Apple CarPlay or Android Auto. Many people will be excited to see the low price of the LX but may soon be disappointed to learn what it doesn't include. There are some competitors to the Civic that do have this type of technology in all of their models, so this may have been a misstep on Honda's part.

2. Honda LaneWatch Can Be Awkward

A blind-spot monitoring system called Honda LaneWatch is part of the Civic's safety package. While it's great that the car does have the ability to monitor its blind spot, the way in which it does so may not be the most ideal. When someone turns on a right-hand turn signal, Honda LaneWatch is activated. A camera mounted on the passenger-side exterior mirror will send a live feed to the car's touchscreen. That way, people can actually see what's in that blind spot.

This all sounds good, but many people who have gotten behind the wheel of a new Civic have found this system to be a bit clunky. It's totally fine to simply be notified by an indicator light or an audio alert instead of having this video feed displayed. Also, the video feed only shows what's behind the passenger side of the vehicle and not the driver's side.

It's likely that some customers would take advantage of the opportunity to upgrade their new Civics with larger touchscreens, heated steering wheels, ventilated front seats, and other features seen in premium models. Sure, Honda was being logical by not making these elements standard in its higher Civic trims, but some people would appreciate having more options.

Honda and Toyota are two big names in the industry. Toyota's Corolla is a strong competitor to the Civic, but the two differ in some key ways. The Civic can show better fuel economy than some versions of the Corolla, and it can have more horsepower as well. If a driver plans on carrying passengers, it's important to note that the Honda Civic has more interior space than the Corolla does. One final thing is that the Corolla doesn't have the standard road departure mitigation system that's found in the Civic.

The Elantra is limited to having three available trims, unlike the Civic that has five trims. The Civic has more available horsepower and torque than the Elantra does, and this will likely matter to a lot of consumers. Further, the Elantra has adaptive cruise control, but only as an option on its mid-level trim and standard on its most premium trim. This is in contrast to the Civic, in which this program is standard across all trims.

There are many good reasons why the Civic has long been such a popular model. It's practical and affordable, and the 2021 Civic is packed with technology to make driving more interactive, entertaining, and pleasant. This car would be a smart investment for anyone interested in getting a competitively priced, compact vehicle that still feels like a high-quality car.


Save Money on a 2021 Honda Civic Sedan:
Are you Shopping for a New Vehicle? Find the Best Deals with "Free - No Hassle" Prices Quotes.