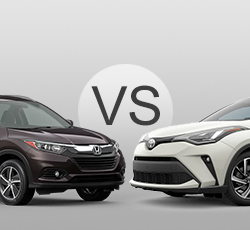 Subcompact SUVs are attractive on many levels. They have some versatility in terms of how their cabins can be arranged, and they provide the additional height in their cargo areas that many people prefer to have. At the same time, they're generally thought to be efficient, affordable, and easy to drive. The 2021 Honda HR-V and 2021 Toyota C-HR are prime examples of how much subcompact SUVs can offer. These two models are likely to be very successful.

Since Honda and Toyota are two very similar brands and since these models share many of the same features, it could be a little difficult to decide whether the HR-V or C-HR would be a better choice. This guide should hopefully provide the details necessary to make that choice.

Before getting into the details of this section, please keep in mind that these are smaller vehicles that aren't necessarily designed to be the toughest models out there. They both have four-cylinder engines and continuously variable transmissions. The HR-V's engine has a displacement of 1.8 liters, while the C-HR's engine is slightly bigger with a displacement of 2.0 liters.

Horsepower is 141 in the Honda and 144 in the Toyota. Torque is 127 pound-feet in the Honda and 139 pound-feet in the Toyota. So, the C-HR certainly wins when looking at the numbers, and every little bit can help with acceleration and responsiveness. However, neither model is extremely impressive in this area. They'll be just fine on regular commutes and long drives on the highway, but they're not suited for any tough work.

That being said, the Honda HR-V can come with all-wheel drive. This is really going to help it win over customers who live in colder climates because it can have improved traction in slippery conditions. Unfortunately, the C-HR is only offered as a front-wheel-drive model.

Both models do have something called Hill Start Assist. This give them the ability to hold the brakes momentarily as drivers switch their feet from pressing on the brake pedals to pressing on the gas pedals. The feature can be useful when stopped on a hill, as it prevents the vehicle from rolling backwards before it can get going again.

One driving mode that the Toyota has is Sport mode. This can boost the excitement level when driving the C-HR by optimizing shifting to allow for quicker acceleration.

The Honda HR-V has an available Active Noise Cancellation feature. This can make the cabin a little more peaceful by blocking out some types of noise. Keeping in mind that the engines in these two models are on the smaller side, though, there's honestly not that much noise that comes through into the cabin anyway.

In the Honda, the cargo area in the back of the cabin has a volume of about 24 cubic feet. The 60/40 split bench in the second row can quickly be folded down to increase cargo capacity to about 58 cubic feet. This is plenty of room for many potential buyers. Plus, the Honda has an additional way to accommodate taller pieces of cargo. Its second row is called a "Magic Seat," and this means that its seats can flip up in addition to being folded down. The part of the seat where people would sit can be lifted up against the seatbacks to create a relatively tall area. It can be used to store items that are up to four feet tall.

A big part of the modern driving experience is having the ability to stay entertained, informed, and connected from the road. For anyone who values technology, the Toyota C-HR has the better infotainment package. It comes standard with an eight-inch touchscreen, Android Auto, Apple CarPlay, and Bluetooth. It even has SiriusXM Satellite Radio to provide dozens of entertainment choices as well as Amazon Alexa to give people instant access to all kinds of information. Wi-Fi ability is available, too. People can use the touchscreen to change the music selection, and there are also steering-wheel-mounted controls and voice-recognition capabilities.

There's a very different story with the Honda HR-V. Its base model doesn't even have smartphone integration. Instead, it has a five-inch color LCD screen with Bluetooth. Bluetooth is a great feature, as it allows hands-free calls and streaming audio, but it's not quite the same as having Apple CarPlay or Android Auto. The top three trims of the Honda do have smartphone integration, along with seven-inch touchscreens and Pandora compatibility. SiriusXM is part of the packages on the top two trims only.

For those who love to listen to music or podcasts while traveling, it might be more preferable to have six speakers rather than four. The lower two trims of the Honda have four speakers, while the top two have six. All of the Toyota trims have six speakers.

The 2021 Toyota C-HR is equipped with many driver-assist technologies as part of its standard Toyota Safety Sense 2.5 package. It has pre-collision braking and pedestrian detection to reduce the chances of a frontal collision, it has lane departure alert with steering assist and lane tracing assist so that it can stay centered in a lane, and it has automatic high beams to more effectively light up dark roads. It also has road sign assist, which can be useful in reminding people about upcoming traffic patterns and speed limits, for example. In addition, it has adaptive cruise control so that it can adjust its speed to stay a safe distance away from other vehicles.

Higher trims of the Toyota can keep an eye out for rear cross-traffic and vehicles that may be in the C-HR's blind spot. This can be critical information when the driver has limited visibility.

Many of the same features are found in the HR-V, but only in the top two trims. The lower trims do not have any driver-assist systems, though they do have rearview cameras and stability control. As expected, they have three-point seatbelts in every position and multiple airbags, just like the C-HR has.

Honda calls its driver-assist package "Honda Sensing." It comes with adaptive cruise control, automatic high beams, and all of the warning and mitigation systems that the Toyota has. One component it doesn't have is road sign assist. Another difference is that the HR-V has Honda LaneWatch. This program actually gives the driver a live view of the vehicle in his/her blind spot when the turn signal is on. It relies on a camera that's been built-in to the exterior mirror to display the image.

Starting out at $21,200 and $21,545, respectively, the Honda HR-V and Toyota C-HR are very affordable. The highest trim of the Honda costs $26,020, and the Toyota tops out at $26,600. These numbers are just about even, so it would be wise to go into some more detail about some of the features that come with the various trims.

The LX is the entry-level trim of the Honda HR-V. It has basic feature in its cabin, like cloth seats and a manually adjustable driver's seat. Remember that it has the five-inch LCD screen, and it has cruise control, map lights, and rear-seat heater vents. The Sport ($23,170) has the notable addition of Apple CarPlay and Android Auto. It has 18-inch wheels, sport pedals, and a leather-wrapped steering wheel. Its black underbody spoilers, roof rails, and fog lights make it look more athletic.

The top two trims of the Honda have the advanced safety mechanisms described earlier. The EX ($24,420) has a moonroof, automatic climate control, push-button start, and heated front seats, and the EX-L ($26,020) features leather seats and a rearview mirror that has an automatic-dimming function. With all of these components, these two trims can feel fairly upscale.

There are also four trims of the Toyota C-HR. Its base model is the LE, and it can attract attention because of its technology and safety components. A step up is the XLE, priced at $23,580. It has blind spot and rear-cross traffic monitoring, as well as smart key entry and 18-inch wheels.

With some unique aesthetic features, the Nightshade Edition ($24,345) stands out. It looks different from the other trims because it has a black chin spoiler, black wheels, black door handles, and dark badging. It will appeal to buyers who prefer to drive vehicles that look more aggressive and edgy. Finally, for $26,600, the Limited offers high-end amenities like leather seats and heated front seats. It has LED fog lights and LED headlights, too.

There are many things that make these models attractive, even if they're not the fanciest or most well-equipped models in the market. First of all, they're competitively priced, and this can go a long way in making them popular. The pricing structures of the Honda and Toyota lineups are very similar to each other, as are the powertrains.

Some factors that work in the Honda's favor are that it has available all-wheel drive, a higher ground clearance, and a much larger cabin. This makes it more ideal for people who plan on driving more than a few passengers around town or on longer road trips. It's the more durable of the two models, and this may matter to those looking for more of a traditional SUV.

While the Toyota may not have the size advantage, it does have a more unique vibe with its hidden rear door handles and bold exterior stylings. This is especially true with the Nightshade Edition. When looking at the lower trims of the Toyota and Honda, the Toyota C-HR is far better equipped in terms of safety and the infotainment package. Given the great emphasis placed on technology these days, this is likely to bring many customers over to the Toyota.

In the end, people have to consider several factors when deciding between the 2021 Honda HR-V and Toyota C-HR. The Honda HR-V is larger and more suited for rugged terrain, but the Toyota has more enhanced technology.

Save Money on a 2021 Honda HR-V:
Are you Shopping for a New Vehicle? Find the Best Deals with "Free - No Hassle" Prices Quotes.