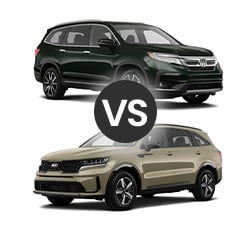 The 2021 Honda Pilot and Kia Sorento are two popular options amongst those in the market for three-row SUVs. While they do offer plenty of seating, they're still easy to maneuver, and they can both be packed with advanced features. This guide will go over how the two models differ so that hopefully it'll be easier for a prospective buyer to narrow down his/her choices.

All trims of the Honda Pilot run on the same type of V6 engine. It has a displacement of 3.5 liters, and it can churn out 280 horsepower and 262 pound-feet of torque. This is a really respectable amount of capability that many drivers will surely appreciate. The Pilot can tow up to 5,000 pounds, so it can be used to haul small boats and other types of gear. That's if it has all the proper towing equipment plus all-wheel drive. If it has front-wheel drive, it can haul up to 3,500 pounds.

In contrast, the Kia Sorento has two available engines. The two engines both have displacements of 2.5 liters and have four cylinders. The difference is that the more advanced engine has a turbocharger. This gives it the ability to make 281 horsepower and 311 pound-feet of torque. This is a little more than the Honda Pilot's numbers. However, a turbocharged Sorento can tow just as much weight (3,500 pounds) as a front-wheel-drive Honda Pilot can.

The lower trims of the Kia Sorento don't have turbochargers. They're still fairly strong, though, having 191 horsepower, 181 pound-feet of torque, and a towing capacity of 2,000 pounds. For the average driver, this could definitely be enough capability.

Paddle shifters are found on every trim of the Honda Pilot. Some drivers like using paddle shifters, on occasion, because it allows them to control the exact moment when the vehicle shifts gears. The Pilot uses a nine-speed automatic transmission and has a shift-by-wire system.

With the Sorento, the AWD system can come with a center-locking differential. Most trims of the Honda Pilot have Intelligent Traction Management. It comes with various driving modes that people can select to optimize their performance based on the conditions they're dealing with. The different driving modes are snow, sand, and mud. With most Pilot trims that have front-wheel drive, there is a snow mode that can be selected to improve traction. This doesn't perfectly compare with the enhanced traction that all-wheel drive can provide, but at least it's something.

Many trims of the Honda Pilot have remote engine start. This can really be appreciated on a hot or cold day because it lets the cabin get to a more comfortable position before people enter. The Honda Pilot has Active Noise Cancellation to make the ride more serene, and it has Idle-Stop to conserve energy. This program automatically shuts off the engine when it's stopped for more than a few seconds, and the engine is automatically turned on again when the driver is ready to get going. Further, there's Hill Start Assist. This holds pressure on the brakes as the driver moves his/her foot from the brake to the gas pedal, with the intention of preventing the Pilot from rolling backwards.

The Kia Sorento also has a feature that temporarily turns off the engine when the vehicle is stopped. Kia calls it Idle Stop and Go.

The Sorento has different driving modes as well. Drive Mode Select is a program that allows people to choose different driving styles. Eco, Sport, and Comfort modes are slightly different than each other. Sometimes, people may choose to drive more aggressively with Sport mode, and other times, they may want to conserve energy. Two other modes are the automatically adjustable Smart mode and a personalized Custom mode. With the Honda Pilot, there's an Eco Assist system that can enhance fuel efficiency.

As mentioned before, the Honda Pilot has a noise-cancellation feature that makes the cabin a little quieter. The Kia Sorento doesn't have anything like this, but most people probably won't mind. These SUVs feel like SUVs as opposed to trucks, so they seem agile and sporty and aren't too cumbersome to handle. The turbocharged Sorento may offer more excitement than the other models because of its additional power.

In general, parking won't be an issue. The only time when it could potentially be a problem would be when parallel parking in a tight spot. The length of the Honda Pilot is 196.5 inches, and it's 78.6 inches wide and 70.6 inches tall. It's definitely the larger of the two models, as the Sorento is 189 inches long, 74.8 inches wide, and 66.7 inches tall.

Neither SUV has a particularly high ground clearance. The Pilot sits 7.3 inches off the ground. A front-wheel Sorento has a ground clearance of 6.9 inches, and an all-wheel-drive version is positioned 8.2 inches off the ground. Some people might be happy that these models are easy to get in and out of, while other prospective buyers may prefer vehicles that are perched higher so that they can more easily clear obstacles.

The way in which these vehicles are configured is somewhat similar. They both have generously sized first and second rows of seating, with the third rows being quite small. In the Honda Pilot, leg room is 40.9, 38.4, and 31.9 inches in each of the three rows. In the Kia Sorento, those numbers are 41.4, 41.7, and 29.6 inches, respectively. There's a tradeoff here; the Pilot has a larger third row but a smaller second row, and the opposite is true in the Kia Sorento.

A bigger difference is related to their seating capacity. The Pilot can seat up to eight people because it has room for three passengers in its third row. In contrast, the Sorento has only two seats in its third row. With both models, captain's chairs can be installed in the second row. This would open up the cabin and make the third row more accessible, but it would reduce seating capacity by one.

Out of all the Honda Pilot trims, almost all of them have touchscreens and Apple CarPlay and Android Auto. Only the first trim, which is the LX, has a five-inch LCD screen. It's limited to having Bluetooth. All the rest have eight-inch touchscreens, and in addition to having smartphone compatibility, they have HondaLink, SiriusXM, and HD Radio.

Select trims have wireless charging, and the top two trims have integrated navigation, Wi-Fi capability, multi-zone volume control, and premium sound systems with ten speakers. Further, they have in-vehicle intercoms and rear entertainment systems. Those come with 10.2-inch screens, Blu-Ray players, streaming apps, and HDMI inputs. Rear-seat passengers will appreciate all of this if they're going on long road trips and want to stay entertained. Buyers with young families will likely be attracted to these features.

In the Kia Sorento, the three lower trims have eight-inch touchscreens, and the two higher trims have 10.25-inch touchscreens. If size matters to particular consumers, this will be an important note. All trims have Android Auto and Apple CarPlay, too, and in one way, this puts the Sorento at an advantage over the Pilot. However, the Sorento doesn't have the extra rear-seat entertainment feature that the Pilot has. Most Sorento trims have UVO link remote connectivity and SiriusXM, and the top two trims have navigation and voice recognition. The SX Prestige trim has a 12-speaker Bose sound system.

From a safety standpoint, these SUVs are very impressive. They have several driver-assist systems that are ready to help a driver avoid a collision. It can be reassuring to know that a vehicle can act as an extra set of eyes and can actually correct a problematic situation. These days, many companies have installed these advanced components in their vehicles, so it's certainly becoming much more commonplace.

For the most part, the two models have the same driver-assist technologies. They both have automatic high beams, frontal collision warning with automatic emergency braking, and lane departure warning with corrective steering. These are going to be impactful features that can prevent many types of accidents. With both models, the base trims are the only ones that don't have blind spot monitoring and rear cross-traffic alert. These systems are handy since it can be difficult, if not impossible, to see other vehicles in certain positions.

There are a few ways in which the safety packages differ. First of all, every Honda Pilot has adaptive cruise control. However, only the top three trims of the Sorento have this component.

On the other hand, the Sorento has some features that the Pilot doesn't have. Its SX Prestige trim has a blind view monitor that can show a live feed of the vehicle in someone's blind spot, it has a surround view monitor, and it has parking collision-avoidance assist in reverse. This last element is basically a reverse automatic braking function that prevents people from backing into other objects.

As one would imagine considering the prices of the Honda Pilot, this vehicle has a lot to offer. The number of amenities found in each trim increases fairly quickly when moving up in the lineup. All trims, with the exception of the base model, have heated front seats, and most have leather upholstery and power tailgates. Higher trims can have heated second-row seats as well as hands-free power tailgates. The top trim has heated and ventilated front seats, a heated steering wheel, perforated leather seats, and all the advanced technology that was previously mentioned.

While the Sorento has some nice features, only one of its trims has leather seats. Many others have a synthetic leather upholstery. The Sorento's top trim does have heated and ventilated seats and a heated steering wheel, along with the larger touchscreen and premium sound system.

The Honda Pilot is the more refined choice. It has several higher quality components, but of course, this comes at a price. Even if customers choose the lower trims of the Honda Pilot, though, they'll benefit from having powerful engines, spacious cabins, and comprehensive safety systems.

With the Sorento, the overall feel is a little more modern and sporty. Every model has an advanced infotainment system, so its base trim might be more attractive than the LX trim of the Honda Pilot for this reason. The Sorento does have some nice amenities and a particularly impressive safety package, and it should be more than acceptable for the average driver. Plus, it can't be overlooked that it's the more affordable model.

When deciding between the two SUVs, a buyer will have to decide whether budget is more important than size. Someone will also have to look at a few trims and decide which safety and technology features are preferred.