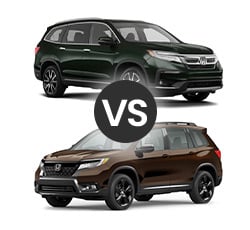 2021 Pilot vs Passport - How do they stack up? What are the differences?

Honda makes several quality SUVs, and the Pilot and Passport are two of the largest options in the company's lineup. They may seem very similar at first glance, and truthfully, they do have many of the same features. There are some differences, though, the most obvious being that the Pilot has three rows while the Passport has two rows of seating. This overview will highlight what makes the SUVs distinct from each other in other ways.

In this last row, there's room for three extra passengers. There's 31.9 inches of leg room. This isn't the most spacious of areas, but it can be perfect for smaller riders.

In terms of cargo space, the Pilot is obviously going to have more capacity. Its total capacity is 83.9 cubic feet. The Passport still has a lot of space, with a maximum cargo capacity of 77.7 cubic feet.

Behind the second row of the Passport, the cargo hold has a volume of 41.2 cubic feet. The dedicated cargo area in the back of the third row of the Pilot isn't too large. It has a volume of 16.5 cubic feet, which is about the same size as the trunk of a large sedan. When the third row is down, there's about 47 cubic feet of space. It's great that there are different ways to fold down the seats since they have split-bench configurations.

Another thing to note is that the Pilot can have a set of captain's chairs in its middle row instead of a bench seat. This would bring total seating accommodations from eight down to seven. Some customers prefer this type of layout because it makes it easier to get in and out of the back row. Only the higher trims can come with captain's chairs, if that's any indicator of how preferable this configuration may be.

It's not a huge surprise that the Pilot and Passport look very similar to each other. They both have boxy frames and look fairly rugged. They have many of the same features, such as LED headlights, rear privacy glass, and remote entry. They have available moonroofs, though the Pilot can be set up with a larger panoramic moonroof instead of a traditional one. A minor difference is that the side mirrors on the Passport are black, while they're body-colored on the Pilot. Plus, the Passport can have side mirrors that can tilt-down when the vehicle is in reverse; this can help drivers steer more precisely.

The two SUVs run on the same type of engine. It's a V6 with a displacement of 3.5 liters. It can make 280 horsepower and 262 pound-feet of torque, so it's quite powerful. Most people would find this engine to be more than sufficient, especially since it can give the SUVs the ability to tow up to 5,000 pounds.

Honda has paired the V6 with a nine-speed automatic transmission. It's a high-quality transmission that should make the vehicles feel responsive. Some drivers may appreciate that paddle shifters are standard. They can use these whenever they want to have control over the exact moment that the gears shift.

If one of these SUVS can direct power to all four of its wheels, it'll have Intelligent Traction Management. This program comes with three settings to choose from: Snow, Sand, and Mud. Drivers can then optimize how their vehicles perform, according to the off-road conditions that they may be facing. Even if a Pilot or Passport has front-wheel drive, it would have Snow mode just in case it has to deal with slippery roads. Snow mode and front-wheel drive doesn't compare to having all-wheel drive, but it's certainly better than nothing.

There are extra features that Honda has given the Pilot and Passport. Both have Active Noise Cancellation to make their cabins quieter. Hill Start Assist is standard, and it holds pressure on the brakes after the vehicles have been stopped on slopes. There's a convenient remote engine start function, and there's an Eco Assist feature for people to use when they would like to conserve fuel.

These two models mostly have the same convenient amenities. Honda thought of its busy customers when designing these vehicles, so they have various storage compartments, numerous beverage holders, interior lighting, tri-zone climate control, and bag hooks and tie-down anchors in the rear cargo areas. Many trims of both models can have auto-dimming rearview mirrors with HomeLink technology, leather-wrapped steering wheels, and ambient lighting.

Compared with luxury SUVS made by other companies, some things might be lacking. For instance, there isn't the option to get one of these models with a digital rearview mirror, customizable ambient lighting, or heated steering wheels. It seems that Honda is all about practicality, at least with these vehicles.

That being said, there are some nice options for seating. The highest trims of the Pilot and Passport have perforated leather seats, with the front rows being heated and ventilated so that people can stay comfortable in any weather. Even the second-row seats are heated. These vehicles have memory systems that can remember two favored positions for the driver's seat, and the front-passenger's seat can be power-adjusted just like the driver's seat can.

Mid-level trims have leather upholstery to add to their sophistication, and they have heated front seats. The memory system that was just described can actually be found in several trims of the Pilot and Passport. For households in which there are multiple drivers, this feature can be very convenient.

Up until this point, the differences in terms of interior amenities have been fairly minor. Now, this discussion will go over technology, and there is an important thing to remember.

The base trim of the Honda Pilot doesn't have a touchscreen, nor does it have smartphone compatibility. It only has a five-inch color LCD screen. It does have Bluetooth so that people can make hands-free calls and stream audio.

In contrast, every trim of the Passport has an eight-inch touchscreen with Apple CarPlay and Android Auto. This model of touchscreen is what's found in all the other trims of the Honda Pilot. It can be customized to a certain extent, and it uses a high-resolution electrostatic touchscreen that's responsive and user-friendly.

On almost all of the trims of the Pilot and Passport, there is SiriusXM Satellite Radio, as well as HD Radio, to give people access to dozens of radio stations. Higher trims can have wireless charging, Wi-Fi hotspot capability, and premium sound systems with 10 speakers.

Two out of the four Passport trims and three out of the seven Pilot trims have integrated navigation. With navigation, it can be so simple to find one's way, even if the terrain is unfamiliar. The navigation system is satellite-linked, and Honda HD Digital Traffic can be used to keep drivers aware of any congestion on the roads.

The top three trims of the Pilot have even more to appreciate. The Touring, Elite, and Black Edition all have rear entertainment systems. These consist of 10.2-inch high-resolution screens, wireless headphones, and Blu-Ray players. Kids, or people of any age for that matter, can enjoy movies, shows, and other types of media. The entertainment system has some built-in streaming apps and HDMI inputs as well. For families with young children, this is going to be an attractive feature that can really come in handy on long road trips.

These three trims can also have in-cabin PA systems. This would allow the driver to speak to the passengers in the back more clearly. The voice can be broadcast through the speakers and wireless headphones that may be in use.

Honda has given the Pilot and Passport the same safety components. They both have an impressive array of driver-assist technologies. With those technologies, they can sense issues, alert drivers to potentially dangerous problems, and even mitigate situations.

One of these SUVs can sense when it's approaching another vehicle too quickly and/or is veering out of the center of a lane. If so, it will warn the driver, and it could hit the brakes or adjust steering, if appropriate. All trims have automatic high beams so that dark roads can be better illuminated, and all trims except the entry-level ones have blind spot monitoring and rear cross-traffic alert.

Other standard elements are rearview cameras with guidelines to assist with parking, traction control, and LED daytime running lights. Considering all the passengers that would possibly be sitting in these vehicles, Honda installed numerous airbags in strategic locations in the cabins of the Pilot and Passport.

Since they have the same engines, there isn't going to be a distinction between how these models handle themselves. Also, they have the same safety packages and almost the same interior features. This means that potential customers will likely be using interior space and minor differences in technology as they figure out which models would be best.

Those who need up to eight seats will have to go with the Pilot, and those who don't need that additional seating but still want spacious cabins will be happy with the Passport. It's helpful that Honda makes many trims of each model, since that gives customers plenty of options to consider.

Now, the last factor to discuss is price. The two highest trims of the Pilot are more expensive than the highest trim of the Passport. This is because they have some extra stylistic details as well as a more comprehensive technology package.

On the lower end of the spectrum, the two models are priced at almost the same level. The Honda Pilot, which notably doesn't have a touchscreen, costs $32,550, and the Honda Passport costs $32,790. Mid-level trims of Pilot are slightly more expensive than those of the Passport. Basically, potential buyers will have to decide whether the third row of the Pilot justifies the extra expense.