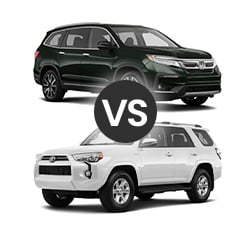 When shopping for a midsize SUV, some people will be deciding between the 2021 Honda Pilot and the 2021 Toyota 4Runner. Adventure-seeking families will love the 4Runner’s rugged design. On the other hand, an extremely comfortable interior and sedan-like handling make the Pilot a great choice. Let’s find out which one of these SUVs is the better option.

The 2021 Honda Pilot comes equipped with a traditional V6 engine. It cranks out a more than sufficient 280 horsepower. This is enough muscle to move the SUV with ease. Power is sent to the wheels through a nine-speed automatic gearbox, which proves to be smooth and responsive.

Like the new Pilot, the 2021 Toyota 4Runner comes standard with a V6 engine. Toyota rates it to develop a solid 270 horsepower. Although the 4Runner’s engine may not produce quite as much horsepower, excellent low-end torque makes it feel just as strong. Automotive journalists give the 4Runner’s five-speed automatic transmission mixed reviews. Some test drivers have noticed that the transmission is hesitant to downshift at times.

Drivers won’t have any issues with the 4Runner’s ability to get up to speed. However, the Pilot does accelerate quicker. Its 0-60 mph time of 6.5 seconds ranks among the fastest in the midsize segment. By comparison, tests show the 4Runner takes around 7.5 seconds to reach 60 mph.

The Honda Pilot and the Toyota 4Runner offer the same towing capabilities. Drivers will be able to pull up to a 5,000-pound load. While some competitors have a higher rating, owners shouldn’t have any issues transporting bass boats and small camping trailers.

The edge in fuel economy clearly goes to the Honda Pilot. According to the latest EPA estimates, it can return up to 20 mpg town/27 mpg freeway. Meanwhile, expect the 4Runner to deliver only 16 mpg town/19 mpg freeway. Fortunately, both of these vehicles are designed to use regular unleaded gasoline.

On the street, these SUVs deliver a completely different driving experience. The Pilot’s car-based platform enables it to rival the maneuverability of a sedan. Drivers can look forward to enjoying stable handling and accurate steering.

Because of the 4Runner’s body-on-frame construction, it drives more like a Toyota pickup truck. This means you can expect to encounter far more body lean when approaching curves. There’s also not much feedback from the 4Runner’s steering system, which makes drivers feel less connected to the road.

When it comes time to venture off the beaten path, the Toyota 4Runner will dominate the Honda Pilot. An optional 4X4 drivetrain with low-range gearing and standard skid plates enable you confidently approach trails. There are two extremely capable trims in the 4Runner’s lineup. Most outdoor lovers will be happy with the 4Runner TRD Off-Road, which receives Toyota’s helpful Crawl Control system and extra undercarriage protection. Special FOX shocks further enhance the TRD Pro trim’s ability to tackle rough terrain.

While the Honda Pilot may not be as rugged as the 4Runner, models equipped with an AWD system are ideal for most camping trips. There’s also enough ground clearance for the Pilot to overcome relatively deep snow.

These SUVs deliver a similar braking performance. During 60-0 mph braking tests, the Pilot needed 123 feet to come to a complete stop. It took the 4Runner about 125 feet to come to a halt from the same speed. However, some test drivers have described the 4Runner’s brakes as being mushy.

Many people choose the 4Runner for its excellent reliability. Few SUVs in the segment are as dependable, including the Pilot. It receives a 4.0 out of 5.0 rating in predicted reliability. This is better than the Pilot’s below-average reliability rating. Like the Pilot, the 4Runner is protected by a 60,000-mile powertrain warranty. Buyers will also receive a 36,000-mile bumper-to-bumper warranty.

The 2021 Honda Pilot’s class-leading ride comfort makes it a great vehicle for traveling. Because of the Pilot’s excellent cushioning, it’s just as comfortable as some luxury models. Families can definitely look forward to enjoying a relaxing trip. Don’t expect the 4Runner’s ride to be as comfy. When driving over rough pavement, this SUV’s rugged suspension causes passengers to feel more bumps.

While the Pilot doesn’t have the segment’s quietest cabin, most automotive reviewers describe its interior as being hushed. Over the years, Honda has done a great job of improving the SUV’s insulation. The 4Runner is not as quiet. While there’s not a lot of wind noise entering the cabin, available off-road tires increase the amount of road noise.

Both of these SUVs are designed for families. While the Pilot comes standard with three rows of seats, a third-row seat is optional on the 4Runner. Nevertheless, the Pilot is a roomier vehicle.

There’s no overlooking the 4Runner’s more compact interior design. When riding in the Pilot’s second row, passengers will have an extra 5.5 inches to stretch their legs. While there’s an additional 0.8 inches of legroom in the front of the 4Runner, most drivers are unlikely to notice. Both SUVs feature well-cushioned and supportive front seats. Keep in mind that only the Pilot offers heated second-row seats.

Regardless of which SUV a person decides to choose, they will have a more than adequate amount of cargo space. The 4Runner has a total cargo volume of 46.3 cubic feet. While the Pilot’s standard third-row seat cuts into its cargo space, drivers can easily fold down the seat. This will expand the Pilot’s cargo space to a whopping 56 cubic feet.

The 4Runner’s forward visibility is impressive. Drivers also won’t encounter any big obstructions when looking through the rear glass. Outward visibility in the Honda Pilot is even better. It has fewer blind spots than most of the competition. Vehicles approaching from the rear will be easier to see.

Both SUVs offer an easy-to-use infotainment system. However, the Honda Pilot’s standard unit is old. It features a basic 5.0-inch screen, which lacks the ability to download mobile apps. To get Honda’s modern Display Audio interface, buyers must climb the trim ladders. This upgraded system provides an 8.0-inch touch display with Apple CarPlay/Android Auto smartphone integration.

Even the base 4Runner is equipped with an 8.0-inch touchscreen. Apple CarPlay, Android Auto, and Amazon Alexa smartphone integration technologies are all included with Toyota’s Entune interface. Large audio and climate controls enhance the system’s user-friendly design.

Only the Pilot offers a CabinTalk intercom system, which makes it easier for drivers to communicate with rear passengers. Parents won’t have to raise their voice when speaking to their kids. Navigation is optional on both vehicles.

The 2021 Honda Pilot is a safe people mover. Good impact test scores enabled the Pilot to receive a NHTSA five-star overall safety rating. However, it was not named an IIHS Top Safety Pick.

While the 2021 Toyota 4Runner is deemed to be a secure vehicle, a four-star overall safety rating puts it a notch below the Pilot. According to the NHTSA’s crash-test results, the 4Runner doesn’t provide as much frontal crash protection for the passenger-side occupant. Tests also show that the high-riding 4Runner is more likely to be involved in a rollover accident.

Both of these SUVs come standard with beneficial safety technologies. Among these driving aids include pre-collision braking, automatic high beams, and smart cruise control. While the 4Runner features standard lane departure warning, the Pilot goes a step further by providing active lane assistance.

When looking at the 4Runner’s list of optional equipment, car shoppers will notice that blind-spot monitoring is not available. Designed to make drivers aware of unseen vehicles, blind-spot monitoring has become one of today’s hottest safety features. Luckily, the Pilot does offer this advanced driving aid.

Honda’s standard Road Departure Mitigation system is also exclusive to the Pilot. When drivers begin to drift off the road, the system will warn them by vibrating the steering wheel. Front and rear parking sensors are optional on both SUVs.

The base Pilot is a solid value. However, it lacks a modern infotainment system. Furthermore, only the 4Runner provides a Wi-Fi hotspot as standard equipment.

When choosing between the 2021 Honda Pilot and the 2021 Toyota 4Runner, car shoppers must take a close look at what these vehicles bring to the table. The Pilot is a more practical daily-driver. Its balanced handling and smoother powertrain will impress a lot of people. It’s certainly a more road-friendly SUV.

The 4Runner is not the best option for daily commuting. This SUV’s engine is quite thirsty, which will force owners to spend more money on fuel. It’s also important to factor in the 4Runner’s bumpier ride and less nimble handling.

Drivers who have a passion for outdoor adventure will favor the truck-based Toyota 4Runner. The SUV’s higher ground clearance and standard skid plates help adventure seekers to confidently venture off the beaten path. Several other off-road goodies are available, including Toyota’s nifty Crawl Control system. When facing more challenging conditions, the system automatically controls the SUV’s braking and throttle.

Most families will have no complaints about the 4Runner’s comfort. However, the Pilot does provide the most passenger room. Growing teenagers will certainly appreciate the extra rear legroom. There’s also less space in the 4Runner’s optional third-row seat. While both SUVs offer heated/ventilated seats, heated second-row seats are only available on the Pilot.

When it comes to exterior styling, these SUVs are total opposites. Some drivers may prefer the Pilot’s clean appearance. However, outdoor lovers will be more attracted to the 4Runner’s rugged exterior. For 2021, LED headlamps now come standard. Like the new Pilot, the 4Runner offers a blacked-out model.

Among the 4Runner’s best qualities is its superior reliability. Owners love its trouble-free performance. Don’t expect the Pilot to be as dependable over the long haul.

At the end of the day, both of these SUVs have some clear attributes. Drivers who are simply in need of a relaxing family hauler will better off picking the Honda Pilot. Meanwhile, adventurous families should go for the new 4Runner.