2022 Honda Accord vs Acura TLX 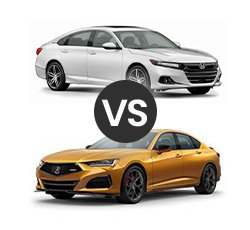 The 2022 Honda Accord and the 2022 Acura TLX are among the best cars in their respective classes. Both models are under Honda’s umbrella. While the Accord is a mainstream family sedan, Acura bills the TLX as a luxury sports sedan.

When choosing between these two midsize sedans, car shoppers must consider several factors. Pricing, driving experience, interior space, and fuel economy are just a few of the key aspects to ponder. Let’s take a closer look at how the 2022 Honda Accord compares to the 2022 Acura TLX.

The Accord offers two levels of performance. Its base powertrain features a smaller 1.5-liter, turbo four-cylinder engine. Honda links this engine to an automatic continuously variable transmission, which helps conserve fuel by keeping the engine churning at a lower rpm. While the Accord 1.5T is not built for racing, a competitive 0-60 mph time of 8.0 seconds gives drivers confidence when merging onto the highway.

Drivers seeking more speed will favor the Accord’s larger 2.0-liter, turbo four-cylinder engine. It pushes out 252 horsepower, which helps transforms the Accord into today's swiftest mainstream family sedan. Road tests show it’s capable of sprinting to 60 mph in only 5.5 seconds. Although the Accord’s 10-speed automatic transmission is good, some testers have found that its gear shifts could be a bit crisper.

The TLX comes standard with a stronger version of the Accord's 2.0-liter engine. It’s calibrated to pump out 272 horsepower. A 10-speed transmission handles the shifting duties. Despite having a bit more brawn under the hood, the heavier TLX 2.0T is not as quick. Drivers can expect a 0-60 mph time of around 6.0 seconds.

TLX fans who desire the most entertaining performance will be interested in the Type S trim. Its turbo V6 engine generates a stimulating 355 horsepower. When launched from a stop, the TLX Type S can dash to 60 mph in 4.9 seconds. Rev-matching technology is also added to the Type S trim’s 10-speed transmission.

In the eyes of many automotive gurus, the Accord is hands-down among America’s best-handling family sedans. While some drivers will desire more feedback from the Accord’s steering system, this won’t be a dealbreaker for most people. An adaptive suspension is found on the top-of-the-line Accord Touring, which enables drivers to choose from comfort and sport settings.

Although the Accord is a confident performer on winding roads, it’s not quite as athletic as the Acura TLX. A lower and wider stance gives the TLX a more aggressive feel. Extra chassis bracing is found on the racier TLX Type S. Serious sports car fans will love the Type S trim’s outstanding combination of comfort and aggressiveness.

The 2022 Honda Accord is strictly a front-wheel-drive model. On the other hand, Acura’s famous Super Handling AWD system is offered on the 2022 Acura TLX. Aside from making the TLX a better choice for wintry conditions, this advanced AWD system also further enhances the sedan’s impressive handling capabilities.

The edge in fuel economy goes to the Accord. Its standard powertrain has a government rating of 30 mpg town/38 mpg freeway. Stepping up to the gutsier turbo engine lowers efficiency to 22 mpg town/32 mpg freeway. Both powertrains are designed to run best on regular gasoline.

In regard to braking performance, tests show the Honda Accord takes around 129 feet to come top a stop when traveling at 60 mph. This is an average showing for a family sedan. With a 60-0 mph braking distance of 127 feet, the TLX is right on par with the Accord. However, all-season performance tires and heavy-duty Brembo brakes enable the TLX Type S to make even quicker stops.

The 2022 Honda Accord gets top marks for its maneuverability. Accurate and easy steering makes this sedan effortless to drive. Acura’s TLX shares these same great attributes. Drivers who find some of today’s other sports sedans to be a bit intimidating will definitely enjoy the TLX. Even the racier TLX Type S inspires amateurs with confidence.

Pleasing ride quality makes the Accord a more than suitable daily driver. Families will appreciate how well it manages to absorb potholes and damaged pavement. Although the top-level Accord Touring may feature an adaptive suspension, the lower trims are just as comfy on the open highway. Activating the TLX’s comfort mode also promotes a smooth ride. With that being said, some people may consider the Accord to the more relaxing highway cruiser.

Like the Accord, the TLX has a quiet cabin. Both of these cars have an extremely well-built cabin, which helps suppress unwanted sounds. Wind and road noise are barely present when traveling at around 70 mph. This is good news for travelers who appreciate a hushed atmosphere.

Of these two cars, the TLX is more geared toward serious driving enthusiasts. A flat-bottom steering helps drivers to aggressively take corners. Sportier seats also enable the TLX to feel like a legitimate performance car.

Drivers who often carry around their family and friends will find the Honda Accord to be a more suitable pick. When traveling in the Accord, front and rear passengers can enjoy more than 40 inches of legroom. While the TLX is a great sports sedan for taller drivers, its backseat is a much tighter fit. There’s only 34.9 inches of legroom in the rear of the TLX. Some of today’s compact sedans provide more spacious accommodations.

Despite its sleek exterior styling, the new Accord provides good outward visibility. This quality helps promote a safer driver. The design of the back window helps reduce blind spots. While the TLX’s forward visibility is great, rear visibility is just decent.

A larger 10.2-inch infotainment screen is featured on the TLX. Unfortunately, there are some drawbacks to Acura’s True Touchpad Interface. For starters, drivers will have to operate the system using a console-mounted controller. Acura also does not offer this infotainment unit with wireless smartphone connectivity. Folks seeking simplicity will favor Honda’s interface.

The 2022 Honda Accord offers an elite level of impact protection. It earned a perfect rating in all the federal government’s key crash tests. A five-star rollover rating also attests to the Accord’s excellent stability. This sedan’s IIHS Top Safety Pick award gives families an even greater sense of security.

Like the Accord, the 2022 Acura TLX received Top Safety Pick+ honors from the IIHS. While the TLX received an NHTSA five-star overall safety rating, it only received a four-star rating in the agency’s “front passenger side” crash test. This puts the TLX just a notch behind the Accord.

These cars come standard with a similar number of accident-avoidance technologies. While the Accord provides a bundle of safety technologies called Honda Sensing, the TLX features AcuraWatch. A few of the common driving aids include pre-collision braking, active lane assistance, road sign detection, and adaptive cruse control. Blind-spot warning and a head-up display are offered on the higher trim levels.

One feature that is exclusive to the TLX is Traffic Jam Assist. When traveling at speeds of less than 46 mph, this system can bring the TLX to a complete halt and then accelerate when traffic begins to move again. Traveling in heavy congestion will be less irritating. While the Accord only offers a traditional backup camera, the TLX can be equipped with a surround-view camera system.

What Has the Best Value?

When comparing these models, car shoppers will immediately notice the 2022 Honda Accord’s more affordable price. It has an estimated starting MSRP of $26,100. Meanwhile, Acura gives the new TLX a starting MSRP of $38,500. Folks who opt for the Accord stand to save a lot of money.

Although the entry-level Accord LX has a much lower price tag, it’s not as luxurious as the base TLX. Some of the base TLX’s exclusive features include a Wi-Fi hotpot, synthetic leather upholstery, and a sunroof. Music listeners can also expect the TLX’s 10-speaker stereo system to sound better than the Accord’s four-speaker unit.

Folks who yearn for pure luxury will be comparing the Acura TLX Technology and the Honda Accord 2.0T Touring. With a listed price of $38,000, the Accord Touring is around $4,500 less expensive. Both of these leather-appointed models feature an adaptive suspension, ventilated front seats, heated rear seats, and a head-up display. However, experts consider the TLX Technology’s 17-speaker ELS Studio audio system to be one of the best in any price class.

For good reason, the 2022 Honda Accord is one of the best-selling midsize sedans on the American market. Drivers who want to save money won’t regret choosing the new Accord. Although the Accord does not offer quite as many luxuries as the 2022 Acura TLX, it does have an easier-to-use infotainment system.

Practicality is another strong point for the Honda. Families will be thankful for its roomier backseat. While the Accord’s base engine may not be the preferred choice among driving enthusiasts, it will conserve a lot of fuel.

Drivers who desire a sports sedan may favor the TLX. It’s more poised handling will come in handy on twisty back roads. Expect the 355-horsepower TLX Type S to be especially fun. There are also a greater number of upscale features offered on the TLX. Highlights include a surround-view camera system, a superior-sounding ELS Studio audio system, and 16-way power front seats.

It’s hard to go wrong with either of these sedans. Nonetheless, the 2022 Honda Accord comes out on top in this head-to-head comparison. Not only is the Accord a better bang for the buck, but it also offers enough performance to satisfy most people. Drivers who simply desire the excitement of a sports sedan should go with the TLX, especially the high-performance Type S trim.

In Depth Accord Comparison Guides: