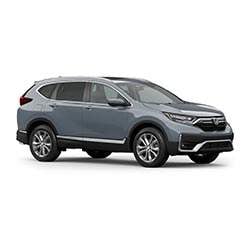 Compare the 2022 Honda CR-V Hybrid Trims - EX vs EX-L vs Touring. What is the difference between them?

The Honda CR-V has been around for some time, and it's enjoyed a lot of success during its long tenure. For decades, it has been a sensible choice for those looking for two-row SUVs that offer good value, capability, and versatility. Honda decided to make a hybrid version of this popular SUV, and it first came out as part of the 2020 model year lineup.

This version isn't that much more expensive than its traditional counterpart. Consumers should expect to pay about $2,000 more for the hybrid powertrain. The CR-V Hybrid an intriguing choice for buyers who would like to decrease their gas consumption. In the long run, the added expense of the hybrid system could more than off-set increased gas prices associated with the traditional engine.

One great thing about the CR-V Hybrid is that it's actually more powerful than a non-hybrid CR-V. It has a total horsepower of 212, thanks to a 2.0-liter engine and an electric motor, and it comes standard with all-wheel drive.

For reference, the non-hybrid has 190 horsepower. It has a smaller engine than the hybrid has, but it comes with a turbocharger. In addition, the non-hybrid can come with either front-wheel or all-wheel drive.

The driver information display behind the steering wheel lets people know when they're using more power generated from the engine or the electric motor, and it indicates when the battery is getting recharged. Some enthusiasts might be very interested in this kind of data and can use it figure out how to maximize efficiency.

There are deceleration selectors mounted on the steering wheel, and they allow users to control the regenerative braking effect. If this effect is maximized, then releasing the accelerator pedal would result in a more dramatic deceleration and the battery would be recharged at a faster pace. It this effect is minimized, then driving the hybrid would feel very similar to driving a non-hybrid.

A main advantage of the hybrid is its fuel efficiency, of course. The CR-V Hybrid can earn up to 40 miles per gallon in the city and 35 miles per gallon on the highway. To enhance efficiency, there's an ECON mode. There's also an EV mode that lets drivers rely exclusively on electric power. (This would only work for limited periods of time, though.) To liven the experience up and make the SUV a little more aggressive, Sport mode can be selected. It's easy to switch between the various modes. All it takes to engage a specific mode is the push of a button.

Before jumping into how the three CR-V Hybrid trims differ from each other, it's important to quickly mention that this SUV is much more spacious than it might initially appear. It's not that large of an SUV, but it still manages to provide more than 40 inches of rear-seat leg room. This is more than what many competitors offer.

Compare the EX vs EX-L Trim Levels. What is the difference?

From the exterior, these trims don't look that too distinct from each other. Perhaps this is because the EX and EX-L are both mid-level trims in the overall CR-V lineup that includes non-hybrids. These two trims have LED headlights, LED fog lights, body-colored roofline spoilers, and smart entry systems. They also have power moonroofs and heated side mirrors with integrated turn signals.

Only the EX-L, though, has a power tailgate that can be opened and closed by pushing a button. The height of that tailgate can be programmed; this would work well for those who park in garages that have low clearance. The EX just has a regular manually operated tailgate.

Inside the cabin of the EX-L, there are a few extra components. Its rearview mirror has an auto-dimming function that reduces distractions at night, and that mirror comes with HomeLink technology so that a button can be pushed to open or close a garage door or operate a home security system. The EX-L has ambient lighting that contributes to the atmosphere, and it has a leather-wrapped steering wheel and shift knob. The steering wheel even has a heating element integrated into it. This makes cold winter days feel a little more comfortable.

The EX might not have all of those features, but it still has a good number of benefits. It comes standard with dual-zone climate control, rear-seat heater ducts, tie-down anchors in the cargo area, and a center armrest in the back row. That armrest can be raised when someone needs to sit in the center position. Additionally, it can be convenient to have push button start so that keys can stay tucked away for the duration of a trip.

Drivers and front passengers will appreciate that these two trims have heated seats in their first rows. Their driver's seats are power adjustable in 12 ways and have four-way power lumbar support, and they can be programmed to remember two favorite positions. Notably, the EX-L has leather upholstery instead of cloth, and its front-passenger seat is power adjustable as well. This seat can be adjusted in four ways.

There really aren't any differences in regards to the technology on these CR-V Hybrids. They both have several driver-assist technologies that are in place to enhance safety, and they have advanced infotainment systems.

Many people will be pleased to learn that the EX and EX-L come with seven-inch displays, Bluetooth, Apple CarPlay, and Android Auto. SiriusXM, Pandora compatibility, and HD Radio are all integrated into the system as well, and this can be helpful in terms of staying entertained on long road trips.

Compare the EX-L vs Touring Trims. What is the difference?

There are only a few differences between the exterior features of the Touring and EX-L. The first thing is that the Touring has front and rear parking sensors, and these can really be useful when making maneuvers in tight parking spots. Scrapes, bumps, and dents can be more easily avoided when the driver is made aware when he/she is getting too close to other objects.

Another difference is that the Touring has roof rails. In case anyone needs to carry cargo on top of the SUV, these can be utilized.

Further, the Touring has a more sophisticated form of tailgate. Its tailgate offers hands-free access. To open up the rear gate, all it takes is a kicking motion underneath the back of the SUV. It's nice to have this option when someone's hands are full of bags or gear. The same motion can be done to close the gate. There's no need to worry about the gate opening up when it shouldn't, as the key fob needs to be in close proximity in order for the sensor to work.

When it comes to interior features, aside from the technology package, the Touring has all of the same elements found in the EX-L. The EX-L does have a lot of coveted components, so it's not that surprising that this is the case. Unfortunately, the Touring isn't available with high-end things like ventilated front seats, perforated leather, or digital rearview mirrors. This might be a missed opportunity.

Where the Touring really shines is in the area of technology. It's the only CR-V Hybrid trim to come with navigation and Honda HD Digital Traffic. The satellite-linked navigation system can be so handy to have when traveling in unfamiliar regions. It's also quite useful on regular commutes, as it can let people know any upcoming traffic congestion. Hopefully, they can use this information to find the fastest routes around town. To input destinations, the touchscreen can be used or voice commands can be given.

The Touring's wireless charging pad will work with many newer devices. It's much simpler to just place a device on the pad rather than plugging it in every time someone gets in the vehicle, only to have to unplug it after the trip. Note that all three of the CR-V Hybrid trims have two USB ports in their front rows and two more USB charging ports in their second rows. Passengers will certainly like having access to charging ports.

Finally, the Touring is upgraded with a better sound system. It has a 330-watt system that has nine total speakers, one of which is a subwoofer. The other hybrids have less powerful 180-watt systems, and they have eight speakers.

These three trims aren't too different from each other. This makes sense, considering that there are actually five total CR-V trims when including the non-hybrids. The non-hybrid lineup starts off with the LX, which is honestly pretty basic, and that's followed by the Special Edition. This means that the EX and EX-L are mid-level trims, and the Touring is the most premium CR-V available.

It's important to think about pricing when determining which trim to select. The CR-V Hybrid EX has a starting price of around $32,000. That number jumps to approximately $34,000 when moving to the EX-L, and the cost rises to a little more than $37,000 with the Touring. When people are prepared to spend that much money on a new vehicle, $5,000 might not seem as significant.

If a potential buyer has refined tastes and loves having modern technology, then the Touring would be an excellent choice. Since it has navigation and wireless charging, it can keep a lot of customers happy. Plus, this trim has parking sensors and a hands-free power liftgate. These are all details that are sure to be appreciated and will definitely be used regularly.

Some consumers are satisfied with things that are more basic, though. In this case, it might be hard to look past the EX. Since it's more of a mid-level trim than an entry-level model, it gets to have a power moonroof, heated front seats, and a great technology suite.

The EX-L seems to have limited advantages. Sure, it has a few key things, such as a heated steering wheel, auto-dimming rearview mirror, and leather upholstery. Many budget-minded consumers can deal without having these types of features and would prefer to save money rather than upgrade. For this reason, the EX comes out as the winner for those who want to be strategic in their investments.

Compare the trims on other Honda Models: