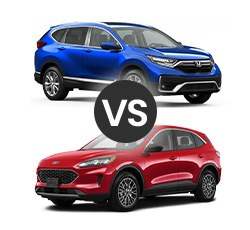 Compact SUVs have become a powerhouse in the automotive world. They are typically large enough to be practical for commuters and their families while still being small enough to maneuver easily. As a bonus, they are typically fuel-efficient. If buyers find that a sedan or hatchback is not going to meet their needs but are reluctant to drive anything too bulky, a compact SUV is the perfect solution.

Honda and Ford go head-to-head in many segments of the market. When looking at compact SUVs, buyers will want to compare the 2022 Honda CR-V with the 2022 Ford Escape. These two vehicles are similar in many ways, but they do have some significant differences it is important to be aware of. The following is a guide that should help buyers make the smart choice for their needs.

For its base engine, the 2022 Honda CR-V goes with a turbocharged four-cylinder that has an output of 190-horsepower and 179 lb-ft of torque. It is mated to a continuously variable transmission. As for the Escape, Ford goes with a turbocharged three-cylinder instead. Still, it manages to be nearly as powerful as the CR-V, producing 181-horsepower and 190 lb-ft of torque. This engine is paired with an eight-speed automatic transmission.

The CR-V does not offer a more powerful upgrade. If buyers choose the 2022 Escape, they can opt for a turbocharged 2.0L four-cylinder that produces 250-horsepower and 280 lb-ft of torque. This engine is only available for the SEL and Titanium trim levels.

Both of these vehicles are available with hybrid powertrains in 2022. For the CR-V, Honda goes with a four-cylinder engine working with two electric motors to create 212-horsepower. It pairs with a CVT. The standard Escape hybrid has a 2.5L four-cylinder and an electric motor, and the output is 200-horsepower. There is also a plug-in hybrid version, which takes things up to 221-horsepower. Either way, Ford also goes with a CVT for its hybrid options.

Front-wheel drive is standard for both of these vehicles. All-wheel drive is also available. If buyers choose the CR-V, they will find that the Touring trim level comes standard with AWD. As for the Escape, it gives drivers AWD on any model that has the more powerful turbocharged engine.

Neither of these SUVs offers particularly impressive towing estimates. The Honda CR-V tops out at 1,500 pounds, no matter the configuration. Most models of the 2022 Escape are estimated to do the same. If buyers choose the larger engine and add the towing package to the Escape, however, they can tow nearly 3,500 pounds.

Both the 2022 CR-V and 2022 Escape are pleasant to drive. Neither of these SUVs would be described as athletic, however. The Escape, in particular, seems to suffer from body roll when turning. This is solved by choosing an AWD model of the vehicle. Between the two, the Escape offers a slightly more engaging experience.

The 2022 CR-V and 2022 Escape are both applauded for the amount of leg and headroom they offer in both rows of seating. Rear legroom is particularly impressive in the CR-V. On the other hand, the Escape's second-row comes standard with the ability to slide, something that is not often seen in the compact SUV class.

Being connected and entertained is a large part of the drivability of a vehicle for many people. Interestingly, both the CR-V and Escape leave smartphone integration off the standard feature list. Android Auto and Apple CarPlay are added by the second trims on the list instead. The CR-V comes with a somewhat disappointing four-speaker sound system. As for the Escape, it has six speakers, and it at least gives drivers a Wi-Fi hotspot.

Safety testing conducted by the National Highway Traffic Safety Administration saw these two SUVs performing at the same level. Both the 2022 CR-V and the 2022 Escape were awarded five out of five stars overall. They both got five stars for frontal and side crash testing, and they both received four stars when it came to rollover testing.

Testing is also conducted by the Insurance Institute for Highway Safety. Both the 2022 Honda CR-V and the 2022 Ford Escape were named top safety picks. They both received the score "Good" in five out of the six main categories tested. The CR-V received the next best score of "Acceptable" in side crash testing. As for the Escape, it received the score of "Marginal" when it came to side crashes.

Although it may seem like the CR-V has the edge when it comes to safety based on the IIHS score, the Escape has the longer list of standard driver aids. Both of these SUVs come with forward collision warning, forward automatic emergency braking, lane-keeping assist, and a rearview camera. The CR-V comes standard with adaptive cruise control, however, while the Escape does not.

At the same time, all models of the 2022 Escape are equipped with driver drowsiness monitoring. This SUV also comes with blind-spot monitoring and rear cross-traffic alert, both of which are optional on the CR-V. The Escape also has more advanced driver aids on its available feature list, including a head-up display, traffic sign recognition, and lane centering assist. Buyers can even get parallel and perpendicular park assist on the Escape.

Savvy buyers will want to also compare the true cost to own for each of these vehicles. The reality is, even though they start out at a similar price, the CR-V holds its value much better. Over the course of five years, the depreciation is estimated to be just over $6,000. That may seem like a lot until it is compared to the 2022 Escape, which will lose over $11,000 in value during that same time period.

Depreciation is not a deciding factor for some buyers, so other costs of ownership factors should also be considered. When comparing the entry-level models, the CR-V has a higher estimated maintenance cost over five years, but only by around $300. The estimated costs of repairs are very close between the two as well. Fuel estimates are also very similar between the two.

Ultimately, these two vehicles will cost around the same to run for a five-year span. The true difference between the two will only become apparent if buyers choose to sell after that time frame. In that case, the CR-V appears to be the smarter buy.

If buyers are more interested in the top trim levels, the Escape will cost more as the years go on. This is primarily due to its larger engine, which is naturally thirstier. In fact, the CR-V Touring is estimated to cost around $9,400 in fuel over five years, while the Escape Titanium will cost over 12,000. Yet again, depreciation will hit the Ford SUV much harder than the Honda SUV when looking at the fully-loaded models.

Both the 2022 Honda CR-V and the 2022 Ford Escape are top choices in the compact SUV class. If a more exhilarating ride is the priority, buyers will want to choose the Escape. It has slightly more agile handling, plus it is available with a more powerful engine for a bit more thrill. If towing is important, the Escape has a higher potential. The Escape also has a larger touchscreen.

At the same time, the top CR-V trim level has more standard tech features. All trim levels of the CR-V have more cargo space, and many people find the cabin to be a bit more luxurious here. It is slightly more fuel-efficient if buyers opt for all-wheel drive. Still, buyers should keep in mind that the Escape Hybrid is a bit more efficient than the CR-V Hybrid.

Although safety is obviously a top priority, it is hard to choose between these two vehicles based on that factor alone. The Escape does have a few extra driver aids, but its side crash test results may make families hesitate. That said, the NHTSA gave the two vehicles identical scores, so the scores from the IIHS may not be a deal-breaker.

As far as an investment in the future goes, the CR-V is the obvious choice. It holds onto its value far better than the Escape. The difference in depreciation rates is apparent within the first year and gets more dramatic with time, making the CR-V a wiser choice no matter how long buyers intend to hold onto their new SUV.

Ultimately, there are many factors to keep in mind when choosing between the 2022 Honda CR-V and the 2022 Ford Escape. The CR-V may be a smarter financial choice, but the Escape is a bit more modern with its larger touchscreen, plus more fun to drive. It will come down to the top priorities of the individual buyer to make the right decision.