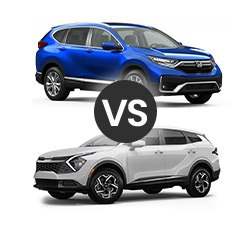 There are a lot of advantages associated with buying a smaller SUV. They are typically more capable and spacious than a sedan, and a well-designed compact SUV is also fun to drive. The automotive market is flooded with small SUVs that are trying to grab buyers' attention.

The Honda CR-V is a popular option that has been around for some time. Another enticing option is the Sportage, which has been a staple for Kia for years. Both of these vehicles are in a generation that debuted back in 2017, making them some of the older options in the market. Still, they manage to be strong choices thanks to their standard features and other perks.

Despite having some similarities, there are also several significant differences between the 2022 CR-V and the 2022 Sportage. The following guide will highlight the differences, making it easier to choose the right one.

Both of the 2022 Sportage engines are mated to a six-speed automatic transmission. All models come standard with front-wheel drive and list all-wheel drive as an available option. The top SX Turbo trim level, which is the only one to come with the more powerful engine, also gains bigger brakes to enhance its performance.

The 2022 Honda CR-V gets excellent fuel economy. Front-wheel-drive models give drivers 28mpg in the city and 34mpg on the highway. Going up to all-wheel drive will mean those numbers drop to 27mpg city and 32mpg highway, which is still excellent. As for the hybrid, it is estimated to get 38mpg combined.

Unfortunately, the 2022 Sportage falls behind the competition when it comes to efficiency. With the standard engine and front-wheel drive, buyers will be looking at 23mpg in the city and 30mpg on the highway. Opting for all-wheel drive will mean getting 22mpg city and only 26mpg highway. Naturally, the more powerful engine does worse. Front-wheel-drive models are estimated to get 20mpg city and 28mpg highway, while all-wheel-drive models will get 19mpg city and 24mpg highway.

Neither of these vehicles is meant to tow heavy objects. When properly equipped, the CR-V can handle up to 1,500 pounds. As for the Sportage, Kia claims it can tow up to 1,653 pounds with the right equipment.

J.D. Power evaluates the predicted reliability of new vehicles on a scale of zero to 100. The 2022 CR-V received a score of 84. As for the 2022 Sportage, it got a score of 88. Both these scores are considered "Great," and the Sportage nearly made it into the "Best" category.

Although neither the CR-V nor the Sportage is the sportiest option in the class, they are both pleasant to drive. The CR-V is easy to handle, and the suspension handles most bumps in the road. As for the Sportage, it has excellent steering feedback and confident stopping power. Visibility is good in all directions in both of these SUVs.

These are both two-row SUVs that do a good job of providing enough room for up to five people. The Sportage can easily seat adults in the second row. It is not quite as impressive as the CR-V, however, which has one of the most spacious cabins in the compact SUV market.

The Sportage regains some ground when looking at the standard infotainment setups. It comes with an 8-inch touchscreen, plus Apple CarPlay, Android Auto, and voice recognition. Comparatively, the CR-V has only a 5-inch display and Bluetooth. The second trim on the CR-V list is the Special Edition, and it gains a 7-inch touchscreen and smartphone integration tools.

A six-speaker sound system is standard for the Sportage, while the CR-V has only four speakers. On top models, the Sportage upgrades to an eight-speaker Harman Kardon setup. There are eight-speaker and nine-speaker premium setups available for the CR-V. Both of these SUVs offer navigation and wireless device charging on select trims.

Both of these SUVs can be equipped with a moonroof and a remote start. The Sportage can add even more luxurious features, including an auto-dimming rearview mirror, a universal garage door opener, and LED interior lighting. It can also add a 4.2-inch driver information display.

New vehicles are typically equipped with advanced safety features. Buyers should compare these, plus the crash test scores. The National Highway Traffic Safety Administration has evaluated both the 2022 CR-V and the 2022 Sportage, and it has awarded both SUVs five stars overall. Five stars were awarded for frontal or side collisions, and four stars were given for rollover testing.

Another source that consumers turn to for safety scores is the Insurance Institute for Highway Safety. Once again, these two SUVs performed the same. Of the six categories tested, the CR-V and the Sportage both got the top score of "Good" in five. They both got the score of "Acceptable" when it came to side crash testing.

The IIHS also evaluates the crash-prevention systems equipped on new vehicles. Both the 2022 CR-V and the 2022 Sportage received the top score of "Superior" for their standard systems. When it comes to headlights, the CR-V received either "Good" or "Acceptable," depending on the trim level. The headlights on the Sportage were deemed "Acceptable" for some trim levels but "Poor" for others.

There are similar driver aids found on the CR-V and the Sportage. They both have forward-collision warning, lane-keeping assist, and lane departure warning. The CR-V has road departure mitigation and adaptive cruise control as well. As for the Sportage, it gives buyers automatic high beams and driver attention monitoring.

Which has the Best Value?

Buyers will find that the Sportage's lower price tag is even more impressive when they look at the standard feature list. The Sportage LX comes equipped with smartphone integration, a touchscreen, and a six-speaker sound system. These features give it a more high-tech feel than the entry-level CR-V, which costs more.

Although it may seem like the Sportage is the more affordable option, buyers should also consider the true cost-to-own of both of these vehicles. This is an estimate that combines things like depreciation, fuel costs, and maintenance. For this guide, the focus will be on the entry-level versions of the CR-V and the Sportage.

Assuming that it is driven 15,000 miles a year, buyers will pay around $7,750 is gas. That is much less than they will pay for the Sportage, which is estimated to cost $9,150 in that same time period. The CR-V is one of the most fuel-efficient vehicles in its class. Repair estimates for the CR-V come in at $1,700, while it will only cost $650 to repair the Sportage in that time frame.

Maintenance costs tell a different story, however. Buyers can expect to spend around $3,000 to maintain the CR-V. The Sportage will cost around $5,100 during that same time frame.

Finally, the depreciation of both vehicles should be considered. A new CR-V will lose around $16,750 in value over the course of five years. The Sportage will only lose around $14,500. That means that drivers will likely get more money for the Sportage than the CR-V if they decided to sell their vehicle after five years.

The 2022 CR-V and the 2022 Sportage are affordable and well-rounded compact SUVs. They both have many advantages, even if they both have a few areas where they fall short. A driver's unique priorities will need to be factored in when deciding which of these vehicles is better.

The 2022 CR-V offers an amazing amount of cargo space. It is also more efficient, and buyers can consider the hybrid variation to save even more money at the pumps. The spacious seating makes the CR-V a respectable choice for families with growing children as well.

On the other hand, the 2022 Sportage has one of the lowest starting prices in the class. It also comes standard with more high-tech features, including Android Auto and Apple CarPlay. The Sportage is also projected to hold onto its value a bit better than the CR-V. For some drivers, the longer warranty coverage will be all that it takes to convenience them that the Sportage is the way to go.

The 2022 Honda CR-V will serve buyers who need a roomy cabin and high fuel efficiency well. Meanwhile, the 2022 Kia Sportage offers excellent value to anyone looking for a high-tech and affordable SUV.