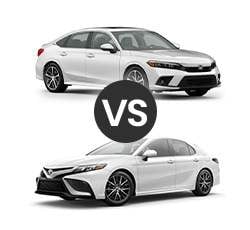 Trying to decide which sedan to buy is no easy feat. Even though the segment has dwindled down quite significantly in recent years due to rising demand for larger vehicles, a few sedans are still holding strong. Two such sedans are the 2022 Honda Civic and Toyota Camry. Both sedans offer a lot of desirable features for the price but also deliver a high fuel economy - something that larger vehicles struggle to provide. That being said, let us take a look at how these two vehicles stack up against one another.

How much power should you expect to get from a small sedan like the Civic or Camry? Quite a bit. Redesigned for 2022, the new generation of Civics come with a base 2.0-liter four-cylinder engine that generates a power output of 158 horsepower and 138 lb-ft. It does give the impression that you need to floor it at launch. Luckily, you can opt for the EX-L and Touring/Sport Touring's 1.5-liter turbocharged four-cylinder engine, which puts forth 180 hp and 177 lb-ft. It feels much perkier and can sprint from 0 to 60 miles per hour in 7.9 seconds, which is slightly faster than average for this segment. The Si's 200-hp version of this turbocharged 1.5-liter engine is, of course, the swiftest and strongest. Honda has essentially perfected the continuously variable automatic transmission, and this shows on the Civic, given its smooth delivery of power to the wheels.

On the Camry, you get a 4-cylinder base engine that produces 203 horsepower but ultimately ends up feeling a bit sleepy. You will have to upgrade all the way to the TRD trim level to get a decent performance from its 301-hp V6 engine. The V6 can be equipped as an option on the XSE and XLE trims, but it is still going to be a pricy upgrade. While the base engine doles out a fantastic fuel economy, it takes over 8 seconds to get from 0 to 60 miles per hour. The standard 8-speed automatic transmission does provide a quick delivery of power to the Camry's wheels and has smooth enough upshifts and downshifts.

There is a somewhat sporty suspension available starting on the SE, making the vehicle feel more planted and stable while cornering. If your driving style is more aggressive, you will still have to adapt it to what the Camry can handle. However, the brakes modulate well even in stop-and-go traffic, and the pedal itself has a responsive feel to it when you press your foot down on it.

The Civic is an easy-going sedan. It might look more conservative than the previous iteration, but it handles with stability and predictability. You won't feel any body roll while rounding through tight turns, and maneuvering in and out of tight parking spots and in heavy city traffic is easy. You get plenty of visibility out the front, and the multi-angle rear-view camera aids in rear vision.

Inside of the cabin, you get an attractive and upscale design that places the intuitively designed controls well within your reach. The spacious cabin allows for taller drivers to slide back without hindering leg room for the person behind them, and the driver's seat has a number of different adjustments along with the tilting and telescoping steering wheel.

Tech-wise, the Civic gives you a user-friendly infotainment touchscreen display that is placed high on the dash, allowing you to keep your gaze at road-level. The lower trim levels have a 7-inch display while the higher trim levels get upgraded to a 9-inch display. You can seamlessly pair your smartphone to the vehicle for music or navigation, but the Touring and Si do come with integrated navigation.

In terms of cargo volume, the Civic sedan has 14.8 cubic feet available, which is one of the bigger numbers for this segment. With the wheel wells and trunk hinges being out-of-the-way, you get more usable space than you might in other sedans. There are still quite a few interior storage spaces available, although they have been dialed back and made more traditional than those on the previous generation.

Drivability has long been a major factor for those buying the Toyota Camry, too. The Camry's cabin is pleasant enough, providing occupants with well padded seats structured for day-long support. The climate control is easy to use and ultimately quite powerful, cooling the cabin down in what feels like record time. The one problem this cabin has is that a lot of noise seeps into it. On the highway, a lot of wind and road noise comes in, and when you accelerate, the engine makes a loud buzzing sound. For a midsize sedan, it should be a lot quieter.

The Camry's cabin isn't quite as high-brow as the Civic's, but it does get high marks for practicality. Outward visibility is magnificent fore and aft, and everyone inside of the roomy cabin should feel like there is enough space for their heads, hips, and legs. Up front, the dash's interface has no real guesswork involved in it. All of the controls are easy to reach and well labeled for readability. Even if you aren't a tech lover, you might find that you enjoy using the tech controls on the Camry.

The tech itself? You get a lot of standard features for the cost. On the base LE trim level, you start out with a 7-inch touchscreen, but a 9-inch option is found on higher trim levels. Smartphone app integration is standard, and upgrading to the XLE nabs you a wireless charging pad.

Storage is generous enough with a 15.1 cubic foot cargo area. With a low lift-over height and wide opening, you can more easily load and unload heavy cargo. You will also find plenty of cleverly covered small item storage areas throughout the cabin.

Fuel economy on the Camry is respectable enough. As the new Honda Civic gets a combined 36 miles per gallon at its best and doesn't quite live up to its estimates in real-world tests, the Camry's real-world showing of 34 mpg combined should make it a close rival. However, that is on the lackluster base engine. The more formidable V6 option is going to take you down a few mpg. However, it is important to bear in mind that the Civic is still technically considered a small sedan (though it certainly looks big enough) while the Camry is a midsize sedan.

Now, let's talk safety, as this is a crucial element that all buyers are looking for to really be top-notch. Honda put some new camera-based advanced driver aids into the Civic this year, and they are really proving to be effective at doing their jobs. Standard driver aids now include a driver attention monitor, frontal collision mitigation, lane keep assist, automatic high beams, a traffic sign reader, and adaptive cruise control. Opting up to the EX/EX-L adds a blind spot monitor while low-speed automatic braking and a rear cross-traffic alert get added to the Touring/Sport Touring.

Safety on the Toyota Camry is also extensive, though perhaps not as robust as the Civic's. You do get standard forward collision mitigation, road sign recognition, automatic high beams, adaptive cruise control, and lane keep assist. You can choose to add the Driver Assistance package. This package combines ventilated front seats with a head-up display (which basically just projects driving info onto the windshield in front of your eyes), a 360-degree surround-view camera system (which gives you a top-down view surrounding the Camry), and rear automatic braking. A blind spot monitor is standard on the XLE trim level and all those above it. It also has full-speed adaptive cruise control, meaning that the cruise control system will work right down to 0 miles per hour, bringing the vehicle to a stop when needed.

Does one sedan have more value than the other? As far as the Honda Civic is concerned, it is jam-packed. It is a touch pricier than some of its top competitors, but there are reasons for that. The number of standard driver aids is more than what rivals tend to offer, and the fuel economy and premium interior design add more value to the Civic this year. While the warranty is industry standard, Hondas are known for their long-term reliability.

The Toyota Camry has a fair amount of value to it as well. The Toyota Camry is a vehicle that is easy for the average driver to use and comfy for all of its occupants, day in and day out. With a respectable fuel economy for a midsize sedan and a long history of dependability, the Camry is one that should not blow through your bank account for years to come.

Like the Honda Civic, the Camry's warranty coverage is industry standard. You get three-year/36,000-mile basic and five-year/60,000-mile powertrain coverage. Unfortunately, this falls short of what Hyundai and Kia now offer, but it is right on par with what Honda serves up. The Camry just doesn't feel as luxurious as the newly revamped Civic, the Kia K5, or the Hyundai Sonata. If you want all the bells and whistles, those vehicles have them. But, if you don't like something with all the frills, the Camry delivers a reasonable overall value.

When it comes to the 2022 Honda Civic and the 2022 Toyota Camry, we would say that these two vehicles are pretty evenly matched. The Camry is not quite as swathed in premium design elements as the Civic, but its fuel economy is right about on par, as are the warranties offered by the manufacturer. Their safety offerings and standard tech are also pretty similar.

The reason why we recommend the Civic over the Camry is the powertrain performance. The Civic's powertrains all feel much more refined. The Camry's engine can get a lot louder than the Civic's, and the base 4-cylinder on the Camry feels dull and droning - not worth the fuel economy it puts forth, especially if you have to do a lot of highway driving. The Civic is a lot sportier, even on the base engine. It has a more refined approach to accelerating and remains pleasantly mute until you take it to full throttle.

Also, the Civic does not have the problems with noise intrusion that the Camry deals with. Instead, you get a quieter ride from the Civic at any speed. Even on the highway with the windows rolled down, the cabin stays tranquil enough for everyone to have a conversation or listen to music without blasting the volume on high.

Overall, the Civic has more value to it and shows just how user-friendly Honda is when approaching their designs. There is a reason why Honda owners keep coming back for more, and the freshly redesigned 2022 Honda Civic shows signs of attracting new long-term Honda owners.