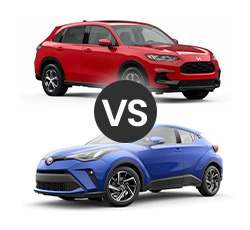 Small SUVs are ideal for many households. They offer some versatility and have the type of frame that many people are looking for. In general, they're agile, fairly efficient, and more affordable than their larger counterparts. The HR-V and C-HR are compact SUVs made by some of the biggest names in the industry, Honda and Toyota.

These models have a lot going for them. It may be hard to distinguish the two from each other in some ways, but there are certainly several areas in which they differ. This guide will highlight these differences.

A buyer isn't going to select either one of these vehicles because of their impressive capability. In fact, it would be quite the opposite. Anyone who really values performance is going to want to look elsewhere, but those who simply need something that can handle paved roads and regular city and suburban driving is likely going to be satisfied with the HR-V and C-HR.

The HR-V runs on a 1.8-liter, four-cylinder engine. It can make 141 horsepower and 127 pound-feet of torque. The engine on the C-HR also has four cylinders, and it has a displacement of 2.0 liters. It's able to generate 144 horsepower and 139 pound-feet of torque. The Toyota has the slight edge in this department, but the margin is hardly noticeable.

An area in which the Honda HR-V stands out, though, has to do with capability. It's available with all-wheel drive. The all-wheel-drive system can make adjustments on its own in case the wheels ever run into trouble with slippery conditions. Unfortunately, the Toyota C-HR doesn't offer this option. All of its models have front-wheel drive, which is the standard configuration for the HR-V as well.

Toyota has given the C-HR a continuously variable transmission. It has a manual shift mode in case anyone wants to be in control over shifting. There are a few drive modes that C-HR drivers can choose from. Normal would be the default mode, obviously, and then there are Sport and Eco modes. Sport mode can make the engine a bit more responsive, and Eco mode would optimize efficiency over performance.

The HR-V has the same type of transmission found in the Toyota. The Honda SUV, too, comes with Sport mode and has an Eco Assist system that increases efficiency. Another feature found on the HR-V is paddle shifters. These are included on three out of the four trims, and they provide an easy way for a driver to make adjustments while keeping his or her hands on the steering wheel.

There really isn't any big discrepancy when it comes to fuel efficiency between these two compact SUVs. An HR-V with front-wheel drive can earn an estimated 28 miles per gallon in the city and 34 miles per gallon on the highway. If it has all-wheel drive, those numbers decrease to 27 and 31 miles per gallon, respectively, and that's actually the same estimated fuel economy of the C-HR.

With their relatively small size, these vehicles can really zip around. Parallel parking and maneuvering in tight spaces shouldn't be too much of an issue. The length of the Toyota is 172.6 inches, and it's about two inches longer than the HR-V. The Toyota is one inch wider than the Honda is, but it's about one and a half inches shorter. The reality is that no one would even be able to detect these differences very easily, even if the two vehicles were parked side by side.

It's a completely different story in terms of interior space. The Toyota, despite its longer body, has much less second-row leg room than the Honda does. The C-HR only has 31.7 inches of leg room in its back row. This is far from a generous amount, and it may be a concern to anyone who plans on having taller children or adults riding with them for longer periods of time. Even children riding in car seats might find this area to be cramped. At least the Toyota C-HR's front row is comfortable with up to 43.5 inches of leg room.

In the HR-V, there's a surprising amount of passenger space. People in the first row have 41.2 inches of leg room, and those in the back have 39.3 inches of leg room. Honda managed to design a compact SUV that still provides plenty of space for passengers in its back seat, and that is definitely going to help it attract some attention in the market.

The Honda model also has more cargo space than its Toyota rival. The HR-V has about 24 cubic feet of space behind its rear seat, and when those seats have been folded down, cargo capacity expands to about 59 cubic feet. Note that there is slightly less space if the vehicle has all-wheel drive.

Behind the C-HR's rear seats, there's a cargo hold that has a volume of 19.1 cubic feet. Lowering the rear seats down does expand the amount of space available to accommodate gear, but it only increases the volume to 37 cubic feet. While a few inches here or there might not add up to a lot, the contrast between having 37 and 59 cubic feet of cargo capacity is pretty striking.

Plus, the HR-V has something unique in its cabin. Its middle row is called a "Magic Seat," and when not in use, it can either fold down or flip up to create more space. The cushion part that people would otherwise be sitting on can rotate so that it's upright, against the seatback. This would create a space of about four feet that can accommodate certain types of furniture, tall boxes, plants, or other similarly shaped items.

Another point is that the Toyota C-HR sits closer to the ground than the Honda HR-V does. The C-HR's ground clearance is 5.9 inches, which is close to the ground clearance that many sedans have. The HR-V sits either 7.3 or 6.7 inches off the ground, depending on whether it has front-wheel or all-wheel drive. Some people prefer having a higher perch when they're driving, while others like the idea of being lower. The higher ground clearance does help, though, with clearing obstacles and driving over uneven terrain.

The Honda has a few extra features. It has hill start assist, which can apply pressure to the brakes in order to prevent the vehicle from rolling backwards after it's been stoped on a hill. The Honda also has active noise cancellation to make the cabin a little quieter. The Toyota SUV has hill start assist, but it doesn't have the noise cancellation program.

Of course, technology matters to modern consumers. Smartphone compatibility and a touchscreen are standard on the Toyota C-HR and available on the Honda HR-V.

Each of the three C-HR trims comes with an eight-inch touchscreen. In addition to Apple CarPlay and Android Auto, they have Amazon Alexa and SiriusXM. This is a pretty comprehensive package, and it also comes with advanced voice recognition and Bluetooth. The standard configuration includes six speakers and Wi-Fi connectivity.

It's too bad that the Honda HR-V doesn't come standard with all of these components. The first trim does not have Apple CarPlay, Android Auto, or SiriusXM, nor does it have a touchscreen. It's limited to having four speakers and a five-inch color LCD screen, but it does have Bluetooth. The next trim in the lineup also has four speakers, and it's upgraded with a seven-inch touchscreen and smartphone compatibility, along with Pandora compatibility. The top two trims get to have SiriusXM and six-speaker sound systems.

Toyota wins the matchup in terms of safety because every one of its trims has a comprehensive suite of driver-assist features. Toyota Safety Sense 2.5 is the name of the standard package, which is actually not very basic at all. Beyond having pre-collision warning, emergency braking, and lane departure alert, it has steering assist, the ability to read road signs, adaptive cruise control that works at varying speeds, and high beams that can turn themselves on and off at the right time.

Further, the Toyota C-HR has blind spot monitoring and rear cross-traffic alert. These components aren't always included with entry-level trims, so this is something that many consumers will take note of. It's always nice to be more aware of what's around the vehicle, and all of these safety mechanisms can enhance a driver's peace of mind.

Out of the four HR-V trims, only the top two have driver-assist features. They do have a good number of these systems, including road departure mitigation, adaptive cruise control, and collision mitigation braking. However, they don't have road sign assist like the Toyota does. They don't have rear cross-traffic alert either, but they do have a program called Honda LaneWatch, which displays a live video feed of the passenger's side blind spot.

The first two HR-V trims don't have any of the advanced sensing and mitigation systems describe above, but they do have anti-lock brakes, traction control, and tire pressure monitoring systems. As consumers have come to expect, they have three-point seat belts in every position, a LATCH system that can be used to secure child seats, and a full set of air bags.

The Honda HR-V is the cheaper model. It starts off with a price of just under $22,000. The top trim has a price of around $26,700, with there being two more trims in the middle of the lineup.

It's not as clear cut when comparing the higher trims. The Honda HR-V's top trim is called the EX-L, and that of the Toyota is called the Limited. Both the EX-L and Limited have heated front seats and leather upholstery. They both have a good amount of advanced equipment as well as heated side mirrors and smart key entry. While the C-HR has LED lights, the HR-V has a moonroof.

The styles of these SUVs are different. The C-HR has an edgy, unique appearance with a hidden rear door handle and a lower ground clearance. The HR-V seems more like a traditional SUV with its upright stance, even though it's on the smaller side. It has available all-wheel drive, too, which may be a big deal to some drivers.

More importantly, the way their cabins have been designed is not the same. The HR-V has a generous amount of space in its cabin both for passengers and cargo. It offers much more room than the C-HR does, so this will help it stand out to those who anticipate loading up their cabins with friends, family, or gear. If someone can afford one of the top two trims of the HR-V, then this model would likely be more ideal than the C-HR.

Notably, the first trim of the Honda HR-V doesn't have a touchscreen, and the first two trims don't have driver-assist technology, so they don't seem like the best investments. Anyone who wants to stick with an entry-level model might want to choose the C-HR over the HR-V for this reason.