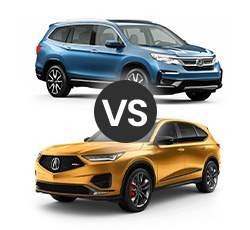 When shopping for a new three-row SUV, many people will be considering the 2022 Honda Pilot and the 2022 Acura MDX. Both of these popular vehicles rank near the top of their respective classes. While the Pilot is a mainstream model, the MDX competes in the luxury class.

For the 2022 model year, the Pilot has received a few significant updates. Some upgraded features now come standard, including full LED headlamps and a larger infotainment screen with smartphone connectivity. Honda has also introduced a new TrailSport trim, which is more suitable for light off-roading.

The 2022 Acura MDX has been redesigned from the inside out. An all-new platform separates the latest MDX from the current Pilot. It brings a more exciting look and new high-tech features. For driving enthusiasts, Acura offers the sportier MDX Type S.

For some car shoppers, picking between the Pilot and the MDX will be a difficult task. Both are worthy family vehicles. Keep reading to learn which one of these models wins this head-to-head clash.

Motivating the 2022 Honda Pilot is a familiar V6 engine, which pushes out a pleasing 280 horsepower. This engine also develops a useful 262 lb-ft of torque. A nine-speed automatic transmission completes the Pilot’s powertrain.

The Pilot packs more than enough performance for chauffeuring around families. It gets up to speed quickly when necessary. Road tests clocked this SUV with a 0-60 mph time of 6.3 seconds, thus putting it among the swiftest in the class. When traveling in mountainous areas, drivers will appreciate the Pilot’s impressive climbing power.

Under the hood of the 2022 Acura MDX is a similar V6 engine. However, Acura tunes the MDX’s engine to press out 290 horsepower and 267 lb-ft of torque. Power is fed to the wheels through a new 10-speed automatic gearbox.

Despite having an extra amount of muscle under the hood, the MDX isn’t any quicker than the Pilot during real-world driving conditions. In fact, drivers can expect the MDX to clock a slightly slower 0-60 mph time. Most automotive critics were impressed by the timely shifts of the MDX’s new transmission.

The lighter Honda Pilot delivers the best overall fuel economy. According to the federal government’s estimates, it will return up to 20 mpg in city traffic and 27 mpg on the freeway. Regular unleaded gasoline is the Pilot’s recommended fuel type.

Like the Pilot, the MDX can tow up to 5,000 pounds when equipped with all-wheel drive. This means drivers should have no issues pulling average-sized boats and small vehicles.

Drivers who may occasionally venture off-road will favor the Honda Pilot. Its new Trailsport trim will satisfy the needs of most adventure-seeking families. A raised suspension gives this trim an additional 0.6-inches of ground clearance, which should come in handy when exploring the rural backcountry. Knobbier tires also enhance the Pilot’s TrailSport’s ability to tackle muddy trails.

While the Acura MDX is capable enough to handle most camping trails, there is not a dedicated off-road model in its lineup. It also has a lower ground clearance of 7.3 inches. The good news is that drivers can engage the SUV’s snow mode when facing wintry weather conditions.

Test drivers were pleased by the Honda Pilot’s smooth braking system. However, this SUV’s panic-stopping distance was just average. When traveling at a speed of 60 mph, it took the Pilot around 129 feet to come to a complete halt.

Expect the Acura MDX to stop quicker when encountering obstacles. It has a 60-0 mph braking distance of roughly 118 feet. High-performance Brembo brakes are equipped on the MDX Type S, thus bringing even more stopping power.

Historically, both of these SUVs have maintained a reputation for being dependable. They tend to deliver a relatively trouble-free performance for thousands and thousands of miles. However, the current-generation Honda Pilot has just an average reliability rating. Because the MDX is all-new for 2022, it has yet to receive a predicted reliability rating.

The 2022 Honda Pilot feels more nimble than the typical three-row SUV. This is a big plus for drivers who desire a good-handling family vehicle. While the Pilot does not offer a sports-tuned suspension, it does inspire confidence in virtually all driving conditions.

While the Pilot is pleasing to drive, it takes a backseat to the 2022 Acura MDX in the handling department. A more responsive steering system also helps make the MDX more engaging to drive. Acura’s available Super Handling All-Wheel Drive system is highly recommended. This advanced AWD system gives the MDX more grip on twisty roads, thus promoting a sportier drive.

Expect the new MDX Type S to deliver an even more surefooted performance. It comes standard with a sports-tuned adaptive suspension. When behind the wheel of the Type S model, testers will immediately notice the SUV’s sharper driving dynamics. Activating the Sport+ mode stiffens the steering and suspension systems for maximum control.

A good ride quality helps makes the Honda Pilot a fine family hauler. Whether driving on city streets or taking the freeway, you will experience an impressive level of comfort. Bumps in the road are rarely felt by passengers. Expect the MDX to offer these same desirable attributes. It ranks among the top models in the segment for road-tripping. Despite its sportier nature, even the Acura MDX Type S also offers a comfy ride.

Outside noise is not an issue for these SUVs. Even the base Pilot receives active noise cancellation as standard equipment. However, sound-reducing windows are found on the higher trim levels. The new MDX is noticeably quieter than its previous generation. Passengers can look forward to experiencing a peaceful trip.

The Honda Pilot rewards drivers with good outward visibility. It has fewer rear blind spots than some other three-row SUVs. Tall, lengthy windows help drivers to better see their surroundings. Visibility behind the wheel of the new Acura MDX is also impressive. A low dash helps drivers to obtain a full view of the street. Although visibility out of the MDX’s rear window isn’t quite as good, flipping down the third-row seat does help.

The Honda Pilot has a larger cabin. It has a total passenger volume of 153.1 cubic feet, which outclasses the Acura MDX’s total passenger volume of 139.1 cubic feet. While second-row legroom is similar, there’s nearly an extra three inches of legroom in the Pilot’s third row. This SUV’s third row also provides an additional four inches of hip room.

Drivers who need to haul around the most people will want the Pilot. While the Pilot can satisfy up to eight people, only seven passengers can fit inside the MDX. Fortunately, both of these models are great picks for tall drivers. There’s actually an extra 0.5 inches of legroom in the front of the MDX.

Like the MDX, the Pilot can be equipped with heated/ventilated front seats and second-row heating modes. Tri-zone automatic climate control is also a standard creature comfort. However, only the MDX offers upgraded front seats with massage functions and upgraded leather upholstery.

Driving enthusiasts will prefer the MDX’s more aggressive cockpit. A flat-bottom performance steering wheel and sport pedals are available. Sport seats give the MDX an even more exciting feel.

This year, Honda updated the Pilot by a making an 8.0-inch touchscreen with Apple CarPlay and Android Auto standard throughout the range. Honda’s Display Audio system is effortless to operate. A noticeably larger 12.3-inch HD touchscreen with wireless smartphone connectivity comes equipped on the MDX. While this interface looks sharp and is easy to read, it isn’t as practical. Drivers must navigate the system via a touchpad controller, which can be more of a hassle to use at times.

Both vehicles give buyers access to a cabin intercom system, thus making it easier for the driver to talk to passengers sitting in the rear. The MDX offers a few extra features that can enhance your driving experience. Only the MDX features a fully digital gauge cluster. This nicety allows drivers to access more information while on the move. A head-up display is also available on the MDX.

The 2022 Honda Pilot’s five-star overall safety rating from the NHTSA gives families extra peace of mind. While the SUV received flawless side crash scores, it earned a four-star rating in the federal government's frontal crash tests.

Although the 2022 Acura MDX has yet to be evaluated by the NHTSA, it was named an IIHS Top Safety Pick+. This is an award that is not on the Honda Pilot’s resume. The MDX received solid marks in every impact test. Even the MDX’s standard LED headlights received a good rating.

The Pilot only received a marginal rating in the IIHS’s updated side impact test. It also takes a backseat to the new MDX in a few other crash categories.

Acura goes a step further by equipping every new MDX with a traffic jam assist. This feature makes driving in heavy congestion less hectic by maintaining a safe gap between you and the next vehicle ahead. It can automatically control acceleration and braking when traffic begins to slow. Driver drowsiness monitoring also comes standard on the MDX.

The Pilot features a traditional backup camera with dynamic guidelines. In contrast to the MDX, it cannot be upgraded with a surround-view camera system. This convenience makes parking in high-traffic areas a bit less challenging.

Although the 2022 Honda Pilot has a higher sticker price than before, it is still significantly less expensive than the 2022 Acura MDX. Honda lists the entry-level Pilot EX-L with a starting price tag of $38,080. On the other hand, prices for the all-new MDX begin at $48,000.

Because of the Pilot’s upgraded list of equipment, it proves to be the better overall value. A few of the SUV’s newly standard features include a more modern touchscreen interface with smartphone integration, leather upholstery, heated seats, and keyless entry.

Both of these SUVs are fantastic options. Car shoppers who aren’t looking to spend as much money will love what the 2022 Honda Pilot brings to the table. While the Pilot’s driving dynamics may not be as sporty, its performance isn’t too far off the mark. Over the years, Honda's standard V6 engine has proven itself to be strong and dependable. With the arrival of a new TrailSport trim level, the Pilot is now a bit more adventurous.

While the Pilot has a handsome exterior, it does not command attention on the road like the new 2022 Acura MDX. When equipped with Acura’s available A-Spec package, the SUV’s exterior and interior receive sporty treatments. Meanwhile, serious driving enthusiasts will crave the MDX Type S model’s enhanced level of performance.

Drivers who simply desire a spacious family hauler that offers today’s most popular amenities should choose the Pilot. On the other hand, car shoppers who seek top-notch luxury and a more engaging driving experience should consider the 2022 Acura MDX.