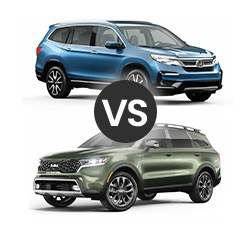 The midsize SUV category is one of the most attractive in the auto space. This category provides an excellent tradeoff between the size and safety features of SUVs and the driving capacity of smaller vehicles.

Large SUVs tend to be much heavier and bulkier, leading to slower acceleration and higher fuel consumption. Additionally, the midsize SUV can have either three or two rows, giving it some more flexibility and ease of use depending on the size of your family. When it comes to family vehicles, midsize SUVs are a good middle ground that can provide safe, reliable, and long-term transport.

Modern SUVs are also significantly more sporty and fun to drive than their counterparts of just a few years ago, so this is a good time to consider investing in a new one.

The 2022 Honda Pilot and 2022 Kia Sorento are some of the best choices in the midsize SUV market. They are both three-row models with lots of space inside, good engine choices, and an appealing set of features for the target demographic.

While you won’t go wrong with either choice of model, they do differ in some key aspects that make them important to distinguish. The Kia Sorento is a bit more of a budget choice with a notably lower price range and less room, while the Honda Pilot is larger as well as slightly more upscale.

Other differences revolve around specific changes in the offerings from one model to the other, and in this post you can learn more about those changes as well as what they mean from the perspective of a buyer who is not sure of which one would be the better fit for their needs.

The powertrain on the 2022 Honda Pilot has one engine that is shared among all of the trims and configuration choices for this model. It is a V6 that has 280 horsepower and comes with an automatic transmission that has 9 speeds. In terms of fuel economy, the Pilot manages 27 highway miles per gallon and 20 MPG, which is more or less average for a midsize SUV. It has tight steering and handling for a vehicle of this size, along with impressive cornering, so it drives like it is lighter than its true weight.

The 2022 Kia Sorento has two engines. The base engine is a V4 rated for 191 horsepower. It has an eight speed automatic transmission as well. There is an upgrade engine that is a turbocharged V4 with 281 horsepower and an improved transmission. It adds a good amount of power, which is good because the base engine leaves the Sorento trailing the Pilot in terms of power on tap.

The base engine does get very good fuel economy, 29 MPG on highways and 24 in cities. You will lose about 2 MPG in cities if you add on the turbo engine, and both engines lose 2 MPG in both city and highway roads if you add on all wheel drive. The Sorento is agile and comfortable, and handling will not be a problem at any speed.

Overall, both of these two powetrains deliver a pleasant and reliable experience, even if their performance is not exciting. You can expect the Pilot to give you more, but the Sorento's better fuel economy is a distinct advantage, especially when gas prices are high.

The Kia Sorento and Honda Pilot are both strong choices when it comes to riding and driving. This are both agile SUVs even though they have three rows. Their combination of balanced powetrains and tight handling means that while they won't feel like a car, they are easy to maneuver on the road and they will both feel swift and engaging. This also makes for a good riding experience for the passengers. The ride is gentle and there is not much body lean. Comparing the two SUVs, neither lags behind in terms of the riding or driving experience when it comes to performance.

There is a gap when it comes to space, however. The Kia Sorento just has less room to offer-- both the third row and the cargo zone in the back are smaller than on the Pilot. The third row is small enough that adults might find it uncomfortable to ride back there. The cargo zone reduction is also an issue for those who plan to haul a lot of stuff like sports equipment or luggage, although there will be enough to manage everyday tasks like groceries.

The infotainment systems are also different between the two SUVs, which does affect the driving and riding. Here, it is the Sorento that comes out on top. Its infotainment interface is easier to navigate and a little faster when it comes to loading menus. It is a better system for quickly finding what you want and making the change. This is especially valuable for the driver. The Pilot's interface is a bit clunky and slow, which does not make for an enjoyable experience. This is not something that is likely to change until the Pilot gets a refresh, but that is not on the horizon anytime soon, because it got a redesign recently.

When it comes to safety features, both of these SUVs do well, which is appropriate for a modern family SUV. However, their features lists are not exactly the same. First of all, both models score excellently on crash tests for the two major testing organizations, which are the Insurance Institute for Highway Safety and the National Highway Traffic Safety Administration. That is a basic measure that any SUV you consider should have.

The Honda Pilot has just about all of its safety and automation features included as standard in the base trim. That is a big boost to its value as well as how easy it is to access those features. They include lane keep assist, forward collision warning, automatic emergency braking, blind spot monitoring, and even adaptive cruise control, among several others. It is a generous list to include as the base.

The Kia Sorento's safety features are more split up among the various trim options. A lot of key features are indeed standard, like forward collision warning, automatic emergency braking, and lane keep assist. However, others, like blind spot monitoring and rear cross traffic alert, are optional add-ons. The features that are optional on the Sorento are mostly present in the standard feature list of the Pilot.

When comparing the full lists side by side, neither model lacks any important contemporary safety feature. Both have a strong lineup and have similar features. However, the Pilot makes them all standard while the Sorento does not. This will only matter if you are considering the base trims of these models. If you are going up to the mid or higher trims, the difference vanishes because the Sorento will be just as well equipped as the Pilot at that point. The safety features are probably not enough on their own to be good motivators to move up trims, but they do help sweeten the pot.

The question of value is not a simple one, but it can have a huge impact on which model is better for you to buy. Overall, the Sorento has a distinct budget-friendly approach to pricing, running $8,000 to $10,000 cheaper than equivalent trims on the Honda Pilot. That does mean some compromises.

For example, the Sorento has one less seat of capacity than the Pilot, and its features are not as complete. Some of them are restricted to options only, and others are not available on the model at all. Moreover, the lower-end engine of the Sorento is a bit of a letdown, and you have to go up to at least the third trim of the Sorento in order to use the upgrade engine.

However, that trim is still cheaper than the starting prices of the Honda Pilot trims. Other features that you want are also available on higher trims, like a bigger screen and upgraded interior features. In short, the Sorento is a model where you really want to aim for one of the higher trims for the best value.
In contrast, the Honda Pilot has a very well equipped base trim. Although there are a total of seven trims, most people will be happy with the first one, or possibly the second, which has a long list of interior and tech upgrades. Upper trims tend to cost too much for what they provide.

Comparing the two, the Sorento has better value for dollar for those who are willing to lose out on a few features and some nice extras. Your money will definitely go farther on the Sorento. But the Pilot is an easy choice if you have a little bit more of a budget to ensure that you get everything that you really want.

Buyers who are committed to an SUV with three rows should keep both the Sorento and the Pilot on their list for new models in 2022. While neither is the top-rated SUV in this category, both provide great value for money and have a lot of strong features and characteristics to the buyer. There are some important factors that set them apart, however.

One of the biggest is the budget question. For the person with the lowest possible budget, the Sorento has a much lower base price, although those low trims are missing a lot of features.

Budget aside, when comparing the upper trims of the Sorento to the low trims of the Pilot, the price difference is smaller, although there is still a feature gap. The most important thing to do is to make a list of which features are must-haves in your dream SUV and think about which one has a better match for that list.

For example, the infotainment system on the Sorento is better to use and faster, while the interior design and performance on the Pilot is stronger than the Sorento. The Pilot is also stronger terms of interior space, which might be important for people who need three large rows of passenger capacity or a lot of cargo space. If you don't need that much space, then the Sorento might be a better fit.

These tradeoffs might seem minor, but they can add up to distinct advantages. They do serve to undercut the fact that in terms of quality level overall, these two SUVs are not very far apart, and neither has any glaring weaknesses.

One of the best ways to try to identify which one is better is to see them in person and take them out for a road test. That will provide detailed, first-hand information about the road-feel as well as the interior and style.