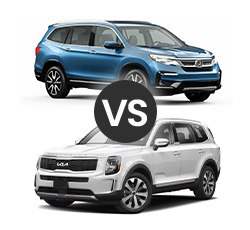 2022 Pilot vs Telluride - How Do They Stack Up? Which is Better?

As three-row SUVs, the Honda Pilot and Kia Telluride are attractive to many prospective buyers. Besides being spacious, they have excellent capability and comfortable cabins. They can have a lot of advanced technology, too, which modern consumers are sure to appreciate.

There are four trims of the Telluride, a model that was first released not too long ago. The Telluride has become quite popular in a short amount of time because of its practicality, value, and performance.

Honda makes seven trims of the Pilot. The Pilot has gone through some changes over its long tenure in the market, and the 2022 model year is impressive in many ways.

Both companies have stuck with one type of engine for these models. They actually both run on V6 engines and can be equipped with all-wheel drive.

The Honda uses a 3.5-liter engine that can make 280 horsepower and 262 pound-feet of torque. This engine is paired with a nine-speed automatic transmission, with paddle shifters being standard. In addition to a standard Eco Assist program, front-wheel-drive Honda Pilots have a Snow Mode that can help them do better when dealing with wintry conditions. The intelligent traction management system on all-wheel-drive models have separate modes for snow, sand, and mud.

The engine on the Telluride is slightly larger, having a displacement of 3.8 liters. It can make 291 horsepower and 262 pound-feet of torque. It works together with an electronically controlled eight-speed automatic transmission, and the Sportmatic sports shifter can give drivers more control over shifting.

There are four drive modes on the Telluride. Comfort mode is probably going to be the default mode for most people. There is an Eco mode as well as Sport and Smart modes. Smart mode is a dynamic mode that adjusts to the situation and can provide a more customized experience. If the SUV has all-wheel drive, it would also have Snow Mode and the ability to lock AWD into place.

Since the power difference isn't that substantial between these models, it makes sense that they can tow the same weight. They both have towing capacities of 5,000 pounds if they've been set up with the proper equipment. This is good news for anyone who may occasionally haul work equipment or other cargo with them.

There is one more advanced feature that's available with the Telluride, but not the Pilot. It's a self-leveling rear suspension. It can level out the vehicle and enhance handling if the cabin is weighted down with heavy cargo in the back.

After being stopped on a hill for a stop sign or red light, vehicles can sometimes roll backwards before gaining the momentum they need to start moving again. Fortunately, both models have hill start assist, which holds pressure on the brakes until the gas pedal is engaged. These models also have traction control programs that are ready to make adjustments at any time.

The market is seeing a huge increase in hybrid vehicles, but so far, Kia and Honda have not chosen to go this route with the Pilot and Telluride. These SUVs don't do that well in terms of efficiency, but at least they are comparable to each other.

These SUVs are easy to handle. They're not as big as full-size trucks or SUVs, so they can still be parked in somewhat compact spaces and can show some agility while maneuvering. They're basically the same length as each other; the Pilot is a half-inch longer. The Pilot is the one with the slightly taller cabin, though the Telluride sits a little higher off the ground.

Inside their cabins, there is room for up to eight total passengers, including the driver. The front rows are, as one would expect, very spacious and comfortable. The second row in the Telluride has a generous 42.4 inches of leg room. In contrast, that of the Pilot has 38.4 inches of leg room. This is still a good amount of space, allowing adults to ride in the row without an issue.

The third rows of these models are much smaller. The Telluride only has 31.4 inches of leg room back there, and the Pilot has 31.9 inches of third-row leg room. On short trips, someone taller might be able to squeeze back there, but this would definitely not be ideal on long journeys.

If the back row of either vehicle is not being used, then it could be folded down to make more space for cargo. Folding down both the second and third rows can considerably expand cargo capacity. Maximum cargo volume in the Telluride is 87 cubic feet, and it's approximately 84 cubic feet in the Pilot.

When the rear seats are in use, the cargo holds are not that large. The Pilot has about 16 cubic feet of cargo space behind the seating area. This is only a bit larger than the volume of a trunk of some sedans. The Telluride has been designed to have a little more volume, with 21 cubic feet in its back cargo hold.

Both SUVs can have two different seating configurations. The first type is the standard one. It would give the vehicle a bench seat in the middle row. In this case, three people could fit together on the bench, with there being room for three more passengers in the third row. The other configuration is to have a pair of captain's chairs in the middle row. This would bring total seating capacity down to seven, but it does open the cabin and gives it a more executive style.

In the Honda, heated front seats are standard, and so is a power-adjustable driver's seat with power lumbar support. There is an option to get a Pilot with heated and ventilated front seats as well as heated second-row seats.

The Telluride doesn't come standard with a power-adjustable driver's seat, but most of its trims have one. Heated front seats are found in most trims, too, and some have ventilation in those seats. Heated and ventilated second-row seats are available, as is a heated steering wheel.

Most modern consumers value technology and appreciate when it's integrated into the things they use on a daily basis. Fortunately, the Pilot and Telluride have nice infotainment packages.

The Pilot has Bluetooth, Apple CarPlay, and Android Auto, along with an eight-inch touchscreen. As a bonus, it has standard SiriusXM and HD Radio. At least two USB ports are included with every model. Some have wireless charging and two more USB charging ports in the second row.

Navigation is standard on the higher trims of the Pilot. It provides turn-by-turn directions and can be very convenient since it takes traffic into account. The top three trims have several more standard components, including a rear-seat entertainment system with two screens, wireless headphones, and a Blu-ray player. They also get to have ten-speaker sound systems, in-cabin intercom systems, Wi-Fi capability, and multi-zone audio so that volume can be at different levels in different rows of seats.

Most would agree that Kia has done a better job when it comes to technology. That's because the Telluride comes standard with a 10.25-inch touchscreen and integrated navigation. That's right, every one of its models gets to have a big touchscreen and access to traffic information and directions. Apple CarPlay, Android Auto, Bluetooth, and six charging ports are standard. Also standard is an intercom system and Quiet Mode, which can focus the sound in just the first row so that passengers can listen to their own entertainment or enjoy some quiet time.

Higher trims of the Telluride can have seven total USB ports and wireless charging. The standard sound system comes with six speakers, whereas the Pilot comes standard with seven. Available on the Telluride is a ten-speaker Harman Kardon audio system.

A few things are missing from the Telluride, in comparison to the Pilot. One is the ability to act as a Wi-Fi hotspot, and the other is a rear-seat entertainment program.

Every one of the trims of the Pilot and Telluride have a number of driver-assist technologies. These can help drivers watch out for potential problems. If issues are detected, warnings will be given, and the SUVs could even take corrective measures by adjusting steering or applying pressure to the brakes. Advanced monitoring equipment allows these vehicles to sense potential frontal collisions and know when they're veering out of position. They also both have automatic high beams, blind spot monitoring, and rear cross-traffic alert.

Adaptive cruise control is found in both the Honda and the Kia. When it's engaged, it can adjust speed depending on how fast the leading vehicle is traveling and how far away that vehicle is. The Telluride's adaptive cruise control program can take navigation information into account, so if the SUV is coming up on a curve, for instance, it would be able to slow down appropriately.

The Telluride can have several other key safety components. It comes standard with a parking distance warning program that works when the vehicle is in reverse. Higher trims have parking distance sensors at the front as well. Plus, it has mitigation systems that work with blind spot monitoring and rear cross traffic alert. In contrast, the Honda Pilot will provide the warning but won't necessarily take action to precent accidents having to do with vehicles that the driver can't see. Further, the Telluride has a safe exit warning, and it can be upgraded with heads-up display and a surround-view monitor.

Even though it has more advanced technology and slightly more power, the Telluride actually has a lower starting price than the Honda Pilot does. The Telluride starts out at around $33,400, while the Sport has a starting cost of around $38,000. That's a somewhat significant difference.

The same is true for the more premium trims in the respective lineups. The SX trim of the Telluride costs a little more than $43,000, whereas the Black Edition trim of the Honda Pilot costs nearly $52,000. At this level, the Pilot comes standard will all-wheel drive. This type of drivetrain costs a bit extra with the Telluride, but the difference in price is still very noticeable.

These trims both have quite a few luxurious features, like heated and ventilated front seats and ambient lighting. The Black Edition has a panoramic roof, while the SX has dual sunroofs, providing essentially the same effect. There may be a few things different about these trims, but it is very hard to say that the Pilot is worth so much more money.

In many ways, the Honda Pilot and Kia Telluride are very similar. They have just about the same amount of power, with the Telluride offering a touch more leg room for its passengers. They have solid infotainment systems and safety packages as well, though again, the Telluride seems to pull ahead in these areas.

When it comes to price, the Telluride is the clear winner. Across the lineup, it's more affordable than the corresponding trims of the Honda Pilot. Considering it has a very nice cabin and a better infotainment system, it comes out as the clear pick.

However, the Honda Pilot has enjoyed a lot of success over the years, and the decision to get a Honda Pilot might come down to brand loyalty. It's difficult to argue against a vehicle that has been proven to be reliable and practical. There's nothing major that the Honda Pilot is lacking, so it would be ideal for many people.

That being said, the Telluride seems like its more upscale than the Pilot, all while having a more affordable price. If someone is coming at the decision objectively, then the Telluride would most likely be the choice.