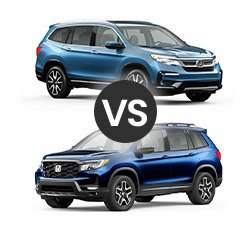 2022 Pilot vs Passport - How Do They Stack Up? What are the differences?

Looking around for a brand new SUV to replace your current set of wheels? If so, then you might have had a few recommended to you, and at least one has probably been a Honda model. As far as segments go, SUV segments are some of the most competitive you'll find. In fact, automakers all strive to best one another's SUVs when it comes to the amount of available space, engine power, and standard tech features. The 2022 Honda Pilot and 2022 Honda Passport are two such SUVs that tend to appeal to buyers.

The 2022 Honda Pilot just purged itself of the LX and EX trim levels for the model year, leaving you with only the EX-L, Special Edition (SE), Touring, Elite, and Black Edition to choose from. Regardless of which one you buy, you will find yourself enmeshed inside of a spacious interior with a versatile design - something that is filled with a slew of storage compartments where you can hide your small items. The Pilot gets a better fuel economy than many third-row SUVs, and the ride quality is one that stays composed and smooth.

However, the Pilot offers tight third-row access, meaning adults will have trouble getting back there. Adaptive cruise control and forward collision warning are overly sensitive and tend to emit many false warnings. To top that off, the Pilot's starting MSRP is higher than a lot of its competitors.

The 2022 Honda Passport is a size below the Pilot, seating five people. It looks much more athletic and has a performance that echoes such. Its optional all-wheel drive system lends some extra traction, and it has enough ground clearance for some light off-roading capabilities.

It is powered by a strong V6 engine, which gives it a lot of power to get up and moving. The new TrailSport trim level - which makes its debut this model year - adds a more rugged look as well as incorporating standard all-wheel drive, roof rails, and stronger grip from the upgraded tires.

But the Passport has some drawbacks, most of which center around its driver assist features. Like the Pilot, they struggle to function properly and are ultimately more of a nuisance than they are a help.

So, which of these two Honda vehicles is the right one for you? Let's find out.

The 2022 Honda Pilot is a mid-size third-row SUV. This means it can seat up to eight, and it has a longer wheelbase than the smaller Passport. The Passport, on the other hand, slates between the smaller crossover CR-V and the Pilot. The Passport only has two rows of seats, meaning its seating capacity maxes out at five. It is actually more rugged in terms of exterior styling and is better able to handle some light off-roading adventures. Its ground clearance is more ample, and AWD is optional.

Drivability is a term that we use to talk about how well-rounded a vehicle is as a daily driver. Are the seats comfortable to sit in for hours on end? Is the ride quality cozy enough without coming off as too floaty? Are the interior materials of high quality? Are the cabin's controls laid out in a way that will become second nature to a driver? Are the tech features straightforward? How much cargo space is available? Just how many small item storage areas are available to use? These are some of the main factors to consider as you go about buying a vehicle.

The 2022 Honda Pilot highlights Honda's strong sense of efficiency intermingled with its smart construction of space and practical features. The first and second rows are generous on space, and although the third row is big enough for time-to-time use by adults, it isn't quite as spacious as others in its segment. Accessway into the third row is a smidge too narrow for adults. The Pilot's drivers have little trouble finding a good seating position if they are of average height, but taller drivers will want more adjustability from the steering wheel. The driver's seat's upright position gives the driver a broader view out of the vehicle than, say, the Honda Odyssey.

The Honda Pilot's touchscreen infotainment system is a user-oriented and ultimately straightforward one. Along with that, the integrated navigation system rapidly responds to your inputs. Even the available 10-speaker sound system generates seriously high-quality sound. WIFI hotspot connectivity is standard on the Touring and Elite trim levels, and you can use the Honda CabinControl app to connect to the Pilot's in-vehicle WIFI. This actually allows you to control certain features, such as the Pilot's rear cabin temperature and music playlists.

The Honda Pilot is a vehicle that is built for a high degree of utility. Cargo space measures in at a respectable 16.5 cubic feet behind the third row of seats and reaches a maximum cargo volume of 83.8 cubes when the second- and third-row seats are folded down. Unfortunately, it lags behind a couple of segment leaders, but there is a lot of under-floor storage that is easy to organize. Door pockets are massive and abundant enough, plus there is a configurable small-item storage area inside the center console. Installing a child car seat is simple due to how much space exists in the second row, and the LATCH anchors are easy to access. Downside: the rear tether points are easy to overlook. You need to look hard for them; they can be found on the bottom of the second row of seats. Accessing the third row to install seats is simple due to the one-button slide function. The AWD-equipped Pilot has a maximum towing capacity of 5,000 pounds - an average showing for a V6-powered mid-size third-row SUV. FWD Pilots are limited to 3,500 pounds of towing.

The 2022 Honda Passport delivers a solid on-road driving performance. Its standard V6 engine puts forth an athletic acceleration, and its paired nine-speed transmission shifts smoothly between gears. A 6.8-second 0-60 mph sprint makes the Passport among the swiftest vehicles in its class. Also, the Passport demonstrates above-average handling capabilities. The steering is decently weighted, which makes the Passport feel nimble and responsive while taking turns. Although the brakes are consistent and easy to modulate in everyday driving, the pedal shows too much 'squish' when you slam down on the brakes. You'll also feel some nosedive during a panic stop, which doesn't help with the 'panic' part of the stop.

The Passport has a lot of contemporary technology features packed into it. The upgraded audio system on Touring and Elite sounds superb. The integrated navigation system responds well to pinch and swipe gestures, making map zoom and rotation simple and effortless. Apple CarPlay and Android Auto smartphone integration are standard across the line-up.

With 41.2 cubic feet of cargo space behind the second row, you get a lot of room for stashing your bulky items. Folding the rear seats down maxes this space out to 77.9 cubes. There is a high load height though. The LATCH system is easy to use given the anchors are accessible and there's plenty of space to work with. There are large door pockets, plenty of cubbies and shelving units, and a clever cubby space in the center console. AWD Passports have a 5,000-pound maximum towing capacity, and the FWD models can tow 3,500 pounds.

The 2022 Honda Pilot is powered by a standard 3.5-liter V6 that puts forth 280 horsepower and 262 lb-ft of torque. It is paired to a nine-speed automatic transmission. The EX-L, SE and Touring trim levels have standard front-wheel drive (FWD) or optional all-wheel drive (AWD). AWD is standard issue on the Elite and Black Edition models.

The Pilot is a capable performer. It can cruise from 0-60 mph in a mere 7.0 seconds, which is somewhat quicker than most midsize third-row SUVs. The Pilot smoothly brakes with a strong sense of consistency. It also comes off as being more nimble than anticipated, handling curvy mountain roads without any drama. Steering lacks road feel but it ultimately precise. AWD performs fine on slick road surfaces, but since it doesn't offer hill descent control or much ground clearance, the Pilot isn't designed for off-roading.

The 2022 Honda Pilot keeps its body motions well under control, and its ride comfort does not suffer from extra stiffness. Even small bumps and jagged road surfaces are properly smoothed out. The front seats provide supportive structuring on the bottoms and seatbacks. The second-row seats are padded just like the front seats and offer sliding and reclining functions.

Now, the 2022 Honda Passport is comfy and spacious, and its suspension keeps large body motions under control and small bumps promptly dispatched. The front seats lack bolstering, but they are wide and exceedingly comfortable. The rear seats, which can recline, are quite good for all-day comfort.

The Passport's cabin is tranquil with barely any wind or tire noise. The tri-zone climate control system , along with the heated and ventilated seats, enhance comfort as you go about your day. Overall, this large cabin is well designed. Head- and leg-space abound, and you can easily fit three adults can sit in the rear seats. The Passport rides somewhat little higher than its rivals, which can make entry and exit difficult for shorter folks. However, there are wide door openings that make it a tad easier. On top of all that, you get plenty of outward visibility all around.

The touchscreen infotainment system is user-friendly and vividly colored. There are physical knobs and buttons used for various controls, which is something most drivers should enjoy. The Passport's unique push-button shifter takes some getting-used-to but ultimately saves on space.

Safety is a major concern for every driver, and automakers know they need to consider this while coming up with their designs. Honda knows how to create a slew of helpful driver aids to enhance security, coming in the form of the Honda Sensing suite.

The 2022 Honda Pilot is, of course, outfitted with the Honda Sensing suite, which bundles together a blind-spot monitor with rear cross-traffic alert, forward collision mitigation, a lane keeping system, and adaptive cruise control. Parking sensors are added to the Touring. Take note: Adaptive cruise control only works at 20 mph and over, which is not helpful in stop-and-go traffic. Lane keep gets intrusive as you zip along on winding roads.

Of course, the Honda Sensing suite is standard on the 2022 Honda Passport, too. This includes a blind-spot monitor with rear cross-traffic alert, forward collision mitigation, a lane keeping system, adaptive cruise control, and parking sensors. HondaLink connected services get added to the line-topping Elite trim. As is the case with the Pilot, some of these features can be quite finnicky. Adaptive cruise control doesn't work down to 0 mph, and lane keep emits too many false warnings. At least forward collision mitigation seems to be functional enough, and the blind spot monitor does help you see into your blind spots.

Both the 2022 Honda Pilot and Honda Passport are great SUVs that compete well in their respective segments. It will boil down to how much space you need and how many seats you require. If you need that third row, the Pilot is the better fit. You'll just have to deal with its narrow accessway. However, if you only need five seats in all, the Passport is definitely the stronger choice. It is more adept at off-roading and offers the new TrailSport trim level, which gives you a lot more ruggedness than what you get on the EX-L or Elite.