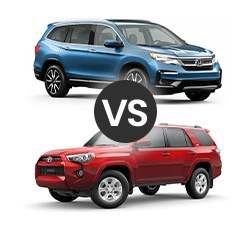 Many customers are specifically looking for vehicles that are on the larger side, and they want to find models that are capable and reliable. The Honda Pilot and Toyota 4Runner fit that description and have qualities that make them attractive to many buyers. They're strong and athletic while having high-tech equipment, and they have ample room for cargo.

There are quite a few options with both vehicles. Honda makes seven version of the Pilot, and Toyota makes eight version of the 4Runner. With such a wide array of trims, there should be models that fit various budgets.

Every Honda Pilot runs on a 3.5-liter V6 engine. This engine is able to deliver 280 horsepower and 262 pound-feet of torque, so it's pretty powerful. It's paired with a nine-speed automatic transmission, and all trims come with paddle shifters to give people some manual control over shifting.

Toyota has matched the V6 to a five-speed electronically controlled automatic transmission. This transmission has sequential shift mode.

Some trims of the Pilot come standard with all-wheel drive, while others have this as an option. When all-wheel drive has been installed in a Pilot, there would be three modes (Snow, Sand, and Mud) as part of the Intelligent Traction Management System. Two-wheel-drive models only have Snow mode.

The 4Runner has available 4x4 capability. Most trims can be set up with a part-time 4WD system, but some have full-time 4WD. A locking rear differential is available in case people plan on dealing with particularly rough terrain. Like the Pilot, the 4Runner has different modes; Toyota calls this program Multi-Terrain Select. There are four driving modes, and when selected, performance can be optimized for the situation. For instance, if the Toyota is dealing with a muddy trail or a rocky terrain, it will be ready to do so.

Some additional mechanical features are included with these models, too. The Honda Pilot has Hill Start Assist, which helps it maintain its position after being stopped on a hill. It does so by maintaining pressure on the brakes as the driver switches from the brake to the gas pedal.

The 4Runner also has Hill Start Assist Control. Further, it has Downhill Assist Control, which is a program that can keep the SUV from gaining too much speed when traveling down roads or trails with steep grades. Another available feature that can come with the 4Runner is Crawl Control. The Crawl Control program can hold a certain speed, freeing the driver to focus on navigating around obstacles and steering appropriately.

The suspension system in the Pilot does its job well. Every trim has a MacPherson strut front suspension and a multi-link rear suspension. The Pilot sits 7.3 inches off the ground, which isn't too high. Some people may prefer this because it makes it easier to get in and out of the cabin.

On the 4Runner, things are a bit more advanced, and the vehicle sits 9.6 inches off the ground. Some buyers may see this as a major advantage, as it lets the vehicle clear various obstacles and deal with uneven terrain more adeptly.

The standard system on the Toyota SUV consists of a coil-spring double-wishbone front suspension and a coil-spring four-link suspension. There are front and rear stabilizer bars.

Several enhancements are available. The TRD Pro trim has Fox high-performance shocks and TRD-tuned front springs. An X-REAS sport enhancement suspension and a kinetic dynamic suspension system (KDSS) are both available as well. KDSS is especially impressive because it can decouple the sway bars when necessary, and when the terrain evens out, the bars reconnect.

In terms of towing, both models have the same maximum capability. They can tow up to 5,000 pounds.

It can be fun to drive these vehicles, as they're both quite responsive. As mentioned, the 4Runner sits much higher off the ground than the Pilot does. The Pilot is longer, though, with a length of 196.5 inches. In comparison, the 4Runner is about 190 inches long. The Pilot is a bit wider, but the 4Runner has the taller cabin.

How does this affect interior space? Well, the 4Runner is an interesting model because it has two different seating configurations. Some models come with a third row of seats, and others do not. In this case, they'd just have more cargo space. Third-row leg room isn't much, as it's only 29.3 inches. This area would be ideal for children or smaller riders on an occasional basis.

All trims of the Pilot come with a third-row bench seat that has room for three people. This is different than the 4Runner's third row, which only has space for two passengers. The third row of the Pilot offers 31.9 inches of leg room. It's still not a lot, but it could be a little more comfortable than the rear seat of the 4Runner.

Anyone sitting in the second row of the Pilot has plenty of space to stretch out. There's 38.4 inches of leg room here. This Honda SUV can have a bench seat in this middle row, or it could have a pair of captain's chairs. This would open up the cabin and give people more room to move around.

In contrast, the 4Runner's middle row can only come as a bench seat. In addition, it offers less than 33 inches of leg room. This is not a lot of space at all, and this may affect the decisions of many buyers.

On the other hand, the 4Runner has a ton of cargo space. Its maximum cargo capacity is nearly 89 cubic feet, and behind the second row of seats, there's a cargo hold that has a volume of 47.2 cubic feet. Those models with the third row have a small area in the back for storage. It only measures nine cubic feet.

Modern customers are looking for ways in which things can be made easier and more convenient. Technology has made a huge impact on the driving experience. While driving either of these SUVs, people can make phone calls, send and receive text messages, and find ways to stay entertained.

Honda has set up the Pilot with an eight-inch touchscreen. The base package comes with seven speakers, Bluetooth, Apple CarPlay, and Android Auto. SiriusXM and HD Radio are also standard. Higher trims can have wireless charging, a total of four USB ports, and integrated navigation.

Select trims can have even more. The sound system can be upgraded to one with ten speakers, and Wi-Fi capability is available. The driver can use an in-cabin PA system to communicate with rear-seat passengers, and people riding in the back might love the available rear entertainment system. It comes with two wireless headphones, a Blu-Ray player, and a pair of 10.2-inch screens.

An eight-inch touchscreen is found on the Toyota 4Runner, too. In addition to SiriusXM, Bluetooth, and smartphone compatibility, the 4Runner has Amazon Alexa. The Toyota's Amazon Alexa program is easy to use and can be linked with other Alexa-compatible devices. Wi-Fi connect is standard, and five USB ports are included with all trims. Higher models can be upgraded with JBL premium sound systems with 15 speakers, and they can have integrated navigation. Wireless charging is not available.

Honda Sensing is the name of the company's suite of driver-assist technologies. It's standard on the Pilot, so every trim has multiple sensors and mitigation systems in place. The Pilot can work to prevent frontal collisions and can keep itself centered in a lane, and it has adaptive cruise control. Adaptive cruise control can hold a set speed, but if the leading vehicle slows down, the program can slow the vehicle down correspondingly.

Toyota's counterpart to Honda Sensing is called Toyota Safety Sense. It has almost everything that the Pilot's package comes with. The only thing it doesn't have is lane keeping assist. It does have lane departure alert, however. This means that it can warn drivers when they're veering out of position, but it can't correct steering.

Blind-spot monitoring and rear cross-traffic alert are included with every trim of the Pilot. Unfortunately, the lower trims of the 4Runner don't have these features; only the mid-level and higher trims do. These can both be very useful when it's otherwise hard to see other vehicles in certain positions.

Toyota has given the 4Runner an available panoramic view monitor. This can be useful when people are trying to make maneuvers in tight spots, as it shows just how close the SUV is getting to other objects. The Pilot doesn't have this element, and both trims do not have a head-up display, which is available with some competitors.

The base trims of the 4Runner and Pilot are priced at nearly the same exact level, which is around $38,000. All of the other trims in the respective lineups cost more than $40,000, so they're not exactly budget-friendly.

When it comes to the amenities that are offered for each trim, it's a close matchup. They can both come with nice features like heated and ventilated front seats, leather upholstery, and a memory system for the driver's seat. The Pilot does have some more advanced components, but the 4Runner would be hard to beat in terms of durability and capability.

The Pilot and 4Runner have a similar size and price, and they're powered by similar engines. Along with this, their safety systems and technology packages are comparable.

However, when looking more closely at what each vehicle has to offer, some differences start to jump out. First of all, the Toyota 4Runner is much more rugged than the Honda Pilot is. The Honda Pilot can handle itself well in a variety of terrain, but there are several 4Runner trims with enhanced 4x4 capability and special suspension systems. These have been designed specifically with off-roading in mind.

The 4Runner doesn't come standard with three rows of seats, but many of its trims do provide this extra seating. This row is pretty cramped and wouldn't necessarily be comfortable for taller adults. In contrast, the Pilot has a standard third row. Its third-row leg room isn't generous, but there is a few more inches than what's found in the 4Runner. Households with a lot of people would probably find the Pilot to be more practical.

Higher trims of the Pilot feel fairly refined, and they're less expensive than their counterparts in the 4Runner's lineup. The Pilot might have more widespread appeal, but the 4Runner will definitely catch the attention of those who are interested in going on outdoor adventures.