2014 Hyundai Tucson Pros vs Cons. Should You Buy? 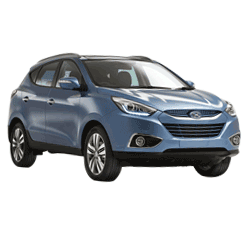 Since its introduction to the United States, Hyundai earned a reputation for quality first with its small cars, then the rest of its fleet. It consistently scores well in J.D. Power’s rankings.

But how does the 2014 Hyundai Tucson crossover stack up against the competition? The Tucson comes with front-wheel drive as standard; all-wheel-drive is offered as an option. The manual transmission is gone; all models now come with a six-speed automatic transmission.

The engines have also changed; the base engine for the Tucson is still a 2-liter four-cylinder, but it now has direct fuel injection. The 2.4 liter option is also available.

Reviewers commented on the fact that it’s easy to drive; AutoTrader.com said that “this crossover could give dance lessons on the curves”

2. It’s compact for a crossover.

Maneuvering in a crowded parking lot is much easier, or in any place that has man-made obstacles. Its footprint is smaller than a Hyundai Elantra sedan, and it has a turning radius of 34.2 feet. For urban driving, being able to squeeze into a parking space without having to start your turn in another state is a great feature to have.

With any new car, cheap is a relative term but the 2014 Hyundai Tucson does what it needs to do for a reasonable price. The base model comes in at just under $23,000, and it’s not a bare-bones vehicle either.

4. The basic Tucson comes with a lot of stuff.

The base model comes with things like alloy wheels, LED headlight accents, air conditioning, Bluetooth, a tilt-and-telescopic steering wheel with audio controls, a 6-speaker sound system with satellite radio and iPod integration and a number of other features. That’s quite a lot for a crossover under $25,000.

The Tucson does look very nice. The lines flow well, and it’s a car that people will take a second look at.

6. The interior looks just as nice as the outside.

The cabin looks like someone designed it from the inside out—meaning that they sat in the 2014 Hyundai Tucson and asked themselves where things should actually be. Combined with the quite-serviceable standard cloth upholstery, it makes a driver and passengers quite comfortable.

7. The controls are simple.

Although it comes with a number of electronic features, the interior is straightforward. Clear gauges, dials and rocker switches all give a certain feeling of stability. Drivers don’t need to possess a computer science degree to know how to use the electronics; no spinning through multiple touchscreens is necessary to turn the radio on. It has enough gadgets to keep technophiles happy, yet still easy to operate.

8. Hyundai has an excellent warranty.

Hyundai has a five-year, 60,000 mile warranty that says they’ll repair or replace any part manufactured or installed by them under normal use and maintenance. They also have a seven-year, unlimited miles warranty against rust under normal use, a powertrain warranty lasting ten years or 100,000 miles, and five years of 24-hour roadside assistance.

JD Power’s 2013 Initial Quality Study puts Hyundai ahead of all of them.

While most drivers can’t afford a luxury car, they also don’t want to buy one that makes their friends chuckle under their breath. Those days are long gone for Hyundai.

Of course, the Hyundai Tucson does have some drawbacks.

Although the 2014 Hyundai Tucson is nimble, there are some problems with cabin noise. If there was a overriding complaint, it was that people could hear engine buzz while driving. Then again, some drivers would say that turning up the radio deals with that quite well.

2. The Tucson is right in the middle of the pack as far as price goes.

While it’s still a good value, other crossovers like the Dodge Journey and Subaru Forester come in under the Tucson’s price point.

3. It’s underpowered and the ride is stiff.

The base 2-liter engine will get drivers where they need to go, but it’s not a powerhouse. If customers have the money, the 2.4-liter engine is a much better pick. Both now have direct fuel injection, so that helps out—but it could be better. The 2014 engines have more torque than the previous year, but it’s not a vehicle for cruising on the highway.

The ride itself can be rough as well; most reviewers had problems with feeling every little bump in the road. Perhaps aftermarket equipment can fix the ride quality, but having to deal with that problem before the car is even purchased might be a turn-off for some.

4. The fuel economy is middling for its class.

The base 2-liter engine will get you 23 mpg in town and 29 on the highway—not bad, but other crossovers do better.

5. There’s not much cargo space.

The 2014 Hyundai Tucson is in the crossover category so most drivers don’t expect it to haul the cargo that a Chevy Suburban might.

But even given the “crossover” limitations, it’s just not that big inside—and with the way the back end slopes, putting anything tall in the back doesn’t work out well. The rear bench seat doesn’t slide back and forth either, although the seat backs fold down.

Is the 2014 Tucson a good vehicle to purchase?

If you’re looking for something to get you and a few people around town with an occasional grocery store stop, this SUV will do the job. The Tucson is a solid, dependable vehicle. It’s not particularly flashy, but Hyundai has positioned it for people who want more space but don’t want something huge.