2016 Hyundai Accent Pros vs Cons. Should You Buy? 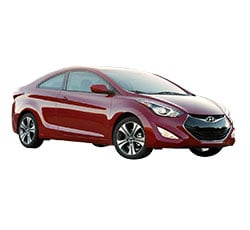 Should You Buy a 2016 Hyundai Accent? Here Are Some Reasons For and Against

This subcompact car has been amongst North America's best sellers since it was first introduced to the market in 2011, and the 2016 Hyundai Accent is a great option for those looking to purchase a commuter car that also provides plenty of room to take gear into the mountains or to the beach.

The GLS Sedan and GS Hatchback trims have been renamed SE Sedan and SE Hatchback while the sedan now offers an option to include a leather-wrapped steering wheel. Meanwhile, the hatchback no longer offers a power sunroof option. The audio system's button layout and voice recognition system have been altered as well while a one-touch turn signal, blind-spot mirror and sliding sun visors have been added.

Top Ten Reasons to Buy a 2016 Hyundai Accent - The Pros

While many other hatchbacks and sedans provide their occupants with bumpy, noisy rides, the 2016 Accent's superior noise insulation provides more peaceful, quiet trips, on freeways as well as on city streets.

Although the interior may not be as exciting as is offered by similar vehicles, the 2016 Hyundai Accent more than makes up for that with how functional it is. Audio and heating and cooling controls are easy to find while the vehicle's backlit buttons prove quite useful when driving in the evening.

For an economy car, providing a six-speaker, 172-watt system, which is included in every 2016 Accent, is quite impressive. A CD/MP3 player, Sirius XM access, iPod/USB outlets and Bluetooth availability are included as well.

Its exterior is impressive too as its sculptural lines and stylish grilles give this vehicle an upscale look. The hatchback's fluid styling serves a practical purpose as well as it helps the 2016 Accent provide smoother rides to its driver and passengers. These vehicles' projector headlights also provide an improved view at night and during foggy and cloudy conditions as compared to many of its competitors.

For a subcompact car, the 2016 Hyundai Accent's safety features stand out. Among its standard ones are stability control, electronic traction, anti-lock braking and anti-whiplash headrests that help reduce the chances of receiving a concussion in a rear-end collision.

This vehicle's 1.6-liter, four-cylinder engine produces 137 horsepower, which is near or above all of its competitors, most of which weigh quite a bit more, and 123 pound-feet of torque. Its sedans can also go from zero to 60 mph in less than 10 seconds.

7. Plenty of Cargo Room in the Hatchback

The cargo space that is available in the hatchback model is impressive while the sedan provides a similar amount of trunk space when compared to other vehicles in its class. In fact, the hatchback provides nearly 50 feet of capacity when the seats are folded, an amount comparable to some SUVs.

Automatic transmission is available on both of the 2016 Hyundai Accent trims while many recommend adding things such as heated side mirrors, cruise control and a telescoping steering wheel to the sedans.

Its 10-year, 100,000-mile powertrain warranty is significantly beyond anything that its competitors offer. Hyundai also offers five-year, 24-hour roadside assistance and seven-year, anti-perforation warranties, both with unlimited miles, as well as a five-year, 60,000-mile new vehicle limited warranty with this car.

Most other subcompact cars and some compact cars offer better fuel economy than this one does. The 2016 Accent provides EPA-estimated 25-30 mpg on city streets and 35-40 mpg on highways with a combined estimated 30 mpg. Many owners have also reported not being able to match those figures.

The 2016 Hyundai Accent has recorded mediocre crash-test scores, which is definitely a cause for concern. Its side-impact protection reports were especially disconcerting as the Insurance Institute for Highway Safety described them as "acceptable." The National Highway Traffic Safety Administration also pointed out that there was a "higher likelihood of thoracic injury" for those involved in a side-impact collision.

Although the standard offerings are impressive, the number of options that are available is not. Not only is the 2016 Accent the first in this series to not offer sunroofs, but leather seats and navigation systems remain unavailable.

4. Poor Visibility in the Hatchbacks

Being able to see everything that needs to be seen can be a challenge when driving the hatchbacks. This is partly due to the size of the D-pillars and back-seat headrests. Although the mirrors are large, which helps, no blind-spot monitors or rearview cameras are available.

How the 2016 Hyundai Accent Stacks up to the Competition

A couple of vehicles that are commonly compared to this one are the Scion iA and Honda Fit.

A 2016 Hyundai Accent may be perfect for those looking for an economical car that is fun too. It also tends to attract people who appreciate how practical many of its features are. However, thrill-seekers may be more interested in one of its flashier competitors. Other vehicles in this class tend to offer more amenities too, although all of those amenities do come with an added cost.

With all things considered, the 2016 Hyundai Accent may be the best value out there.