2016 Hyundai Tucson Pros vs Cons. Should You Buy? 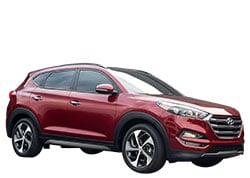 Should You Buy a 2016 Hyundai Tucson? Here are the Pros and Cons

The first-generation Hyundai Tucson entered the American market in 2005. It came offering a reasonably priced compact crossover suitable for daily commuting with a broad range of trim levels. The basic style of the Tucson has been carried through to the current generation, even though the engine options have over the passage of time changed.

The Tucson is an SUV crossover that looks and performs more closely to a tall hatchback. The Tucson rival’s vehicles such as the Subaru Forester, Mazda CX-5, the Honda CR-V, Ford Escape, and the Toyota RAV4. The 2016 Hyundai Tucson is a fully redesigned all-new model.

Reviewers have expressed their satisfaction with the comfortable ride of the new 2016 Tucson. The engine has a 7-speed automatic transmission that according to auto critics delivers timely and effortless shifts.

The majority of automotive journalists have found the Hyundai Tucson to be adequately powered with the optional engine having more than adequate powering prowess. The exclusive automated manual transmission of the Turbo has made great impressions on drivers due to its quick responses and smooth shifts with no downside.

If the new Hyundai doesn’t become a success regarding sales in 2016, certainly it won’t be because of the SUV’s styling. The Hyundai automaker may be said to have mishandled the redesign of its Sonata, but the all-new 2016 Hyundai Tucson certainly looks terrific.

Auto reviewers are excited by the long list of Hyundai Tucson's standard features as well as the accessibility of lots of high-tech safety features which were lacking on previous Hyundai models.

Whether you're an early adopter or tech-averse, the electronics of the 2016 Hyundai Tucson interface is certainly to meet your standards of approval.

Reviewers deem the Tucson’s front seats to be comfortable, the adjustable rear seats very spacious, and a rare compliment in this class.

Storage for small-item is excellent as you have a center console of medium size. Other features like the automatic power lift-gate that opens as you approach the vehicle are other benefits you will get from the Tucson.

Reviewers have rated the Hyundai Tucson as a car that is relatively affordable to own, and the same tradition comes to the 2016 model.

Although the government is yet to test the new Tucson, the IIHS had already established that the Tucson rated as a Top Safety Pick.

Drivers have noted that the turbocharged engine is smooth and peppy.

The NHSTA has not made recalls for 2016 Hyundai Tucson due to safety issues.

Reasons Not to Buy a 2016 Hyundai Tucson – The Cons

If what you desire is a great power when you are behind that wheel, the Tucson might not be the dream crossover.

The handling profile of the 2016 Hyundai Tucson doesn’t come out shining when pitted against market leaders like the Mazda CX-5 and even the Ford Escape or Honda CR-V.

Automotive reviewers feel that the 2016 model would have done better with a bigger dose of flair.

Despite its overall larger dimensions, the 2016 Tucson still comes rather short when it comes to cargo capacity. The 31 cubic feet of space (and 61.9 cubic feet when seats are folded) is among the smallest for the class.

The 2016 Hyundai Tucson may be compared with Mazda CX-5 and the Honda CR-V.

The new 2016 Hyundai Tucson is competing in one of the most popular new vehicle US market segments and looks well placed than most of its rivals. When you combine the SUV’s aesthetic appeal with its value and safety options plus the ability to get lots features commonly reserved for high-end luxury models, then the Hyundai becomes a car of choice.