2017 Hyundai Accent Pros vs Cons. Should You Buy? 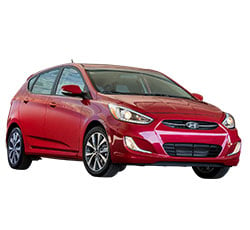 Should You Buy a 2017 Hyundai Accent? Here Are Some Reasons For and Against

The 2017 Hyundai Accent builds on its predecessor to become one of the best subcompacts available for the 2017 model year. In this post, we will go over 10 of the best reasons to buy one and balance that out with a few of its downsides.

The 2017 Hyundai Accent is mostly the same from the previous year. The biggest change is a new trim line, the Value Edition Sedan, which adds a higher-end trim option for those who do not want one of the hatchback-styled trims.

Top Ten Reasons to Buy a 2017 Hyundai Accent - The Pros

The 2017 Hyundai Accent is one of the least expensive cars in its class. In terms of sheer value, it is hard to beat, even beyond the lowest trim level. Especially attractive are the hatchback packages that add more features and space while maintaining the same lower prices. It makes an ideal new affordable car for a couple just starting out.

While this is limited to the hatchback trims only, it is worth mentioning on its own. It is rare for a subcompact to have notable cargo space, but the 2017 Hyundai Accent pulls it off with 21 cubic feet in the back for those trims, which grows to 47.5 cubic feet with the rear seats folded down. The sedan models have 14 cubic feet in the back.

The Accent comes with a six-speaker sound system that you can link to a mobile device using Bluetooth. It doesn't clutter up the feature with additional streaming options that you won't use, because your phone is already where you store all your music now. There's also a satellite radio tuner if you just want to see what is playing.

Efficiency tends to be a hallmark of subcompacts, and the 2017 Hyundai Accent is no exception. It gets an eye-catching 27 MPG on city roads and 37 on highways. The Accent's advantage is especially large in the highway test, so if you plan to do commuting or other frequent travel via highway, then you'll reap a larger benefit from the efficiency. This is equal or better than most competing subcompacts.

Every year, JD Power rates how reliable it predicts each new car to be. This is just an estimate, but it can tell you a lot about what to expect for new models before you own them. The Accent earned 4 out of 5 stars, a high rating and one that beats many of its more expensive peers in this class.

To add on to the reliability rating, the 2017 Hyundai Accent comes with perhaps the best warranty in the class. The car has a limited overall warranty of 5 years or 60,000 miles and a powertrain warranty of 10 years or 100,000 miles. It's hard to find a competitor anywhere in the class that even approaches those numbers, which helps to protect you unexpected damage and other events.

Too many contemporary designs opt for touchscreens that have confusing menus or don't read taps properly. Seeing that the 2017 Hyundai Accent has traditional buttons and knobs for key controls is refreshing. These controls feel more reliable and accessible, and certainly require less time to learn. They are also less distracting to the driver and don't require taking your eyes off the road.

Despite lacking some luxury features like leather seats or heating, the plastic molding is of high quality and comfortable for all but the tallest drivers and passengers. Some subcompacts are too cramped to seat adults in the back row, but that is not true for either style of Accent. The optional telescoping steering wheel is a boon to taller drivers who want to reposition their arms.

The combination of a small frame and a powerful base engine make the Accent very much at ease around turns. It feels natural and comfortable taking corners at reasonable speeds, retaining the smooth caliber of the ride. It's not sporty, but it is graceful.

The Accent does not come with many features standard, and on top of that there are few options at any trim level. What you see is more or less what you get. Other subcompacts allow for adding more advanced features at higher prices. This extends to most categories of feature, from safety to interior to infotainment, and might make you reconsider if you want a particular set of features that are not available on the Accent.

The Accent has worse safety ratings than most other subcompacts, with especially weak results on the small overlap front test from the IIHS. Other cars in this category earned higher ratings and even awards for safety, making the Accent's weak performance a little puzzling. The problem is compounded by the lack of advanced safety features that rival cars carry as options or standard.

There are four trim choices for the 2017 Hyundai Accent, but only the Sport Hatchback is a good choice. It combines an automatic transmission with the hatchback design for better cargo space. The sedan choices are not appealing because the extra space is one of the Accent's biggest features, and there is little point in giving that up. The Sport Hatchback is the top trim but is still relatively inexpensive.

The Accent competes with cars like the Honda Fit, Ford Fiesta, and Mini Cooper. It generally costs less for a stronger base engine, but fewer features. That places it solidly at the economy end of the market.

If you want a subcompact, plan on commuting via highway, need some cargo space, and are looking to avoid spending too much, the Accent will fit your needs. It's a contemporary budget-friendly subcompact.