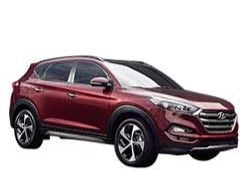 What 2018 Hyundai Tucson Trim Level Should you Buy? What is the Difference Between Trims?

The Hyundai Tucson was the company’s smallest crossover, aside from the just-introduced Kona. And other than that same Kona, it is also the most recent of the Hyundai crossovers, with the last major update for the 2016 model year.

Like other Hyundai cars, it attracts drivers through a combination of a low price, an impressive warranty, and a decent selection of features. Since its 2016 update, the Tucson has seen only minor changes, with this year’s model simply reshuffling some of the trim levels and getting rid of the less popular options.

Despite the more simplified and streamlined progression, the 2018 Hyundai Tucson still has a fairly versatile range of models. Three engines, two transmissions and two drivetrains are available across six different trim levels, which gives prospective Tucson shoppers a lot to consider.

To make the consideration process easier, this guide condenses all of the equipment on each of the trim levels into a few readable paragraphs, outlining the differences between each one and noting how various options can add to the overall value of the vehicle. With this information in hand, picking out the perfect Tucson configuration will be a simple task.

Compare the 2018 Tucson SE vs SEL Trims. What is the difference?

The base model of the Hyundai Tucson, the SE is fairly standard in terms of equipment that it includes, but it is also one of the least expensive options in the compact crossover class. This gives the otherwise typical selection of standard features a pretty solid value.

All the basics are covered on the Tucson SE, including power locks and windows, keyless entry, cruise control, air conditioning, a 5-inch touchscreen infotainment system with a CD player, and a rearview camera. In terms of more premium features, the SE also has a digital driver information screen in the instrument cluster, 17-inch alloy wheels, and body-color side mirrors.

It comes with a six-speed automatic transmission and front-wheel drive, though all-wheel drive is an option. The engine powering it is a 2.0-liter naturally aspirated engine with 164 horsepower. Outside of the all-wheel drive option, the SE offers no optional packages.

The SEL is a small upgrade on the SE, adding a number of nice convenience and comfort features along with a more modern infotainment system. While the SEL does not have the CD player that the SE does, most will probably not miss it. Instead, the 7-inch touchscreen supports satellite radio, Android Auto, and Apple CarPlay, which should cover most modern entertainment needs.

The SEL also includes front seat heating, a power seat for the driver, fog lights, LED running lights, a drive mode selector, and a number of exterior accents. Like the SE, the SEL uses the basic 2.0-liter engine, a six-speed automatic transmission, and either front-wheel or all-wheel drive. It also offers no optional packages of note.

Both the SE and the SEL versions of the Tucson are good values for the money. The SE includes a fair bit of equipment for its very low starting price, while the SEL adds a lot more useful features on top of it for a small increase in cost.

For many drivers, features like the smartphone integration and satellite radio support are must-haves on a brand-new car, which makes the SEL a better choice. Heated and powered seating is also a good reason to opt for the SEL model. For all but the strictest budgets, the SEL is likely to be a greater return on investment.

Compare the 2018 Hyundai Tucson SEL vs SEL Plus Trim Levels. What is the difference?

The SEL Plus is essentially the premium version of the basic engine lineup on the Tucson. It still features the same engine, transmission, and drivetrain options as the SE and the SEL, and includes all of their standard equipment. In addition to that, the SEL Plus has leather upholstery, power adjustments for both front seats, dual-zone automatic climate control, push button start, an Infinity sound system, a built-in navigation system, and premium trim all around the interior.

This model also comes bundled with a number of safety features, including blind spot monitoring and rear cross traffic alert, though it does not offer forward collision warnings or emergency braking. Like most of the other Tucson models, it is equipped as-is, with no other factory package options available to choose from.

For those who want a leather interior on a budget, the SEL Plus can make a relatively good choice. It is priced roughly on par with other compact crossovers with similar equipment, though most of them don’t have a genuine leather interior like the SEL Plus. However, for those who don’t consider leather important, it is actually more expensive than the Sport and Value trims that include similar features and more advanced engines.

As the basic 2.0 engine lags behind in terms of both fuel economy and power against the other two engine options, it could be a smart option for many to consider those models instead for the same price range.

Compare the Tucson SEL Plus vs Sport Trims. What is the difference?

The Hyundai Tucson Sport is the most performance-minded of the Tucson lineup. It gives up some of the creature comforts that the SEL Plus brings such as leather seats, navigation, and the power passenger seat, in exchange for a more powerful 2.4-liter engine.

At 181 horsepower, it is the strongest engine available on the Tucson, and comes together with a few additional visual cues like special 19-inch wheels. Surprisingly, it actually gets better mileage than the base engine in the city, and matches it on the highway, making it more fuel efficient as well, matching the 1.6-liter turbo in the higher models. It uses the same six-speed automatic transmission as the previous three models, and is available as both front-wheel drive and all-wheel drive crossover.

For drivers looking for a bit more performance, this car could be a good choice, but we would also recommend drivers to try the Value model with its own engine as well before making a decision. It offers the same fuel economy as the Sport, while also adding more comfort features and a more responsive transmission. Drivers for whom economy and performance take a back seat to comfort, can instead go with the SEL Plus and all of its excellent amenities.

Compare the Tucson Sport vs Value Trim Levels. What is the difference?

The Value is the first model equipped with the most advanced Tucson powertrain. Its 1.6-liter turbo engine clocks in at 175 horsepower - very close the Sport performance. But its advantage lies in its more modern 7-speed dual clutch transmission. Faster and more responsive than the six-speed automatic used in the lower models, it uses the power of its engine much better than the Tucson Sport does.

While the actual measured performance between the two models is fairly even, the Value feels considerably quicker than the Sport from behind the wheel. On top of that, the Value adds more of the comfort features that the Sport omits, such as a hands-free liftgate, a panoramic moonroof, and rear parking sensors.

The Value trim is true to its name, packing a lot of desirable features into one package, but its biggest draw remains the improved engine and transmission. The combination of performance and efficiency make it the best engine choice for most buyers considering a Tucson. All of its equipment and the advanced engine come at a similar price point to the SEL Plus, though it does not have its leather or premium speakers.

Unless either of those options are must-haves though, the Value is a better deal. With the 2.4-liter engine being the only draw of the Sport model, most buyers will also want to choose the Value over it.

Compare the 2018 Hyundai Tucson Value vs Limited Trims. What is the difference?

The Tucson Limited is a very simple trim level to describe. It is basically the Tucson SEL Plus with the engine and transmission from the Tucson Value. It includes all of the features from the SEL Plus that were missing on the Value and Sport models: the leather upholstery, Infinity audio, built-in navigation, heated steering wheel, and a power passenger seat. The only one omitted is the panoramic sunroof. It also includes some interior and exterior accents that are exclusive to the Limited to set it apart from the lower models.

The Limited is also the only Tucson with an options package available. The Technology Package includes the panoramic moonroof, heated rear seats, ventilated front seats, and a full range of safety technology including forward collision warning with automatic braking, lane departure warning, and smart HID headlights.

Aside from the active safety features that are part of the Limited Technology Package, all of the features that the Limited offers are available in other models. The main reason to opt for it over one of the lower trim levels is the combination of features that it offers. Drivers that don’t care about the upgraded engine can choose the SEL Plus for the same comfort equipment, while those that are not interested in leather can choose the Value edition instead. However, it does not cost significantly more than either the Value or the SEL Plus, so upgrading from either of those two models is easily worth the money for drivers who want the features of both.

With such a large selection of trim levels to choose among, it is not surprising that the Tucson offers both many strong entries and several weak ones.

The SEL is a strong choice for those looking at the lower end of the compact crossover price range, as it has many of the key attractive features that buyers want, such as modern infotainment and heated seats.

Similarly, the SEL Plus is an upscale variant of the SEL with excellent premium features. The Value model combines a decent feature set with a more advanced drivetrain, while the Limited offer the best of both worlds for a fair price.

Most drivers will probably want to avoid the Sport model, as its engine does not offer a significant improvement in performance for the cost and the luxury features it gives up. The SE would be a fairly good choice on its own, but it offers only limited savings over the much nicer SEL, limiting its appeal.

Save Money on a 2018 Hyundai Tucson:
Are you Shopping for a New Vehicle? Find the Best Deals with "Free - No Hassle" Prices Quotes.