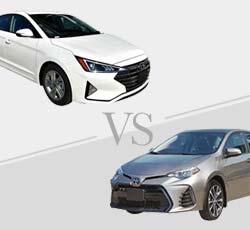 2019 Elantra vs Corolla - How do they stack up? Which is Better?

For those who want an affordable compact sedan that can be relied on for many years, the Hyundai Elantra and Toyota Corolla can both be considered. While not the fanciest of vehicles, these 2019 models are built with many features that make them comfortable to ride in and easy to drive. The base models are definitely budget-friendly, and the higher trims of these vehicles aren't too expensive either. There are six trims on the 2019 Hyundai Elantra (SE, SEL, Value Edition, Eco, Limited, and Sport) and seven trims on the 2019 Toyota Corolla (L, LE, Hybrid LE, SE CVT, SE (6MT), XLE, and XSE).

The Elantra - which is a front-wheel drive vehicle - can come with one of three available engines. The Eco gets the best mileage, as one might expect from the name of the trim, at 33/41 (city/highway) miles per gallon. The trade-off is that the Eco only has 128 horsepower and 156 pound-feet of torque with a 1.4-liter turbocharged GDI four-cylinder engine. Many drivers, though, don't need much more than that for their regular commuting and longer road trips. The Eco comes with a dual clutch transmission, and it's the only trim that has the ability to stop the engine while idling.

The next engine available is a four-cylinder, 2.0-liter engine that can achieve 147 horsepower and 132 pound-feet of torque. It uses multi-point fuel injection as well as an intelligent variable transmission. With this engine, the SE gets an estimated 31/41 mpg, and the SEL, Value Edition, and Limited models achieve 30/40 mpg.

In the Elantra Sport, there is a more powerful engine running things. The Sport comes with a 1.6-liter turbocharged engine that can generate up to 201 horsepower and 195 pound-feet of torque. It also has the same dual clutch transmission as seen in the Eco. This type of system allows for quicker and smoother shifting as well as greater efficiency. The Sport gets 26/33 mpg, which is respectable given the greater capability of the engine.

All of the Elantra's have three different drive modes - Normal, Sport, and Smart. This lets drivers decide how aggressive or efficient to make their driving. The SE and Eco come with front disc brakes and rear drums, where as the others have disc brakes at all four wheels.

There are also multiple engines available on the Toyota Corolla. The base component is a 1.8-liter four-cylinder engine that can create 139 horsepower and 126 pound-feet of torque. These cars use a continuously variable transmission, and mileage is great in them, at an estimated 30/38 mpg.

Doing even better in this category is the Hybrid LE, which gets up to 53/52 mpg. It runs on a 1.8-liter four-cylinder engine that comes with intelligent variable valve timing and an electronically controlled continuously variable transmission. Like the Elantra Eco, its horsepower is limited, at 121. It comes with 105 pound-feet of torque.

The two SE trims use a 2.0-liter four-cylinder engine that can output 169 horsepower and 151 pound-feet of torque. The SE CVT gives drivers the option of choosing the "Normal" mode, which is relatively smooth, or the "Sport" mode, which feels a little more aggressive. The CVT is fun to drive, with a dynamic-shift continuously variable transmission. It has a first-launch gear that gives drivers some excitement getting off the line. Estimated mileage is 31/40 mpg.

The SE (6MT) is unique in that it has a six-speed manual transmission. Its estimated mileage is 29/36 mpg. This would be a major contender for anyone who wants that classic feeling of pressing the clutch down and shifting gears by hand.

At the XLE level, the engine is a 1.8-liter four-cylinder model with 139 horsepower and 126 pound-feet of torque. This is upgraded to a 2.0-liter four-cylinder engine in the XSE. Horsepower increases to 169 and torque gets bumped up to 151 pound-feet. The XSE has the same continuously variable transmissions the SE CVT does, along with "Normal" and "Sport" driving modes.

Every Corolla has a front-wheel drive set up. The dependable electronically controlled braking system includes power-assisted ventilated front disc brakes and solid disc brakes in the back. Hill Start Assist Control is convenient to have when drivers are occasionally tackling inclines. It keeps the car stopped while the driver moves to hit the gas pedal after having come to a stop.

Small doesn't necessarily mean cramped. The Elantra has a total interior volume of 110.2 cubic feet, with 14.4 cubic feet in the trunk. Leg room is 42.2 inches in the front and 35.7 inches in the back, which is fairly comfortable even for adults in the back.

Cargo space in the Corolla is smaller, at 13.1 cubic feet, and total interior volume is 101.7 cubic feet. Leg room is nearly identical for the driver and front passenger, at 42 inches. Leg room for the people riding in the back seats is 34.8 inches.

The Elantra has cloth seating on all but the top two trims, which come with leather seats. A power driver seat is only included on the limited, and a power tilt-and-slide sunroof is seen on the Value Edition and Sport. For those who like heated front seats, look for the Value Edition trim or higher. Those trims, in addition, have proximity key entry, a push button start to make it simple to get in and go, leather-wrapped steering wheels, and front passenger seatback pockets for more storage options.

Various materials are included on the Corolla. The L has fabric-trimmed seats, and the LE has premium fabric. The SE models have premium sport seats that have a more vivid style. SofTex-trimmed sport seats, which are heated in the front, are in the XLE and XSE. The LE has a remote keyless entry system, and a more advanced Smart Key System is found on the Hybrid LE and above, either as a standard or available option.

Infotainment systems are heavily considered when many modern customers are looking into potential vehicles. The Elantra has the coveted Android Auto and Apple CarPlay capability starting at the SEL level. At these trims, the touchscreen is measures seven inches, and both HD and SiriusXM Satellite Radio are available. The SE only has the traditional AM/FM/MP3 audio system along with a five-inch touchscreen. With the Limited and the Sport, there's the option to get an eight-inch touchscreen with integrated navigation, and the Limited includes an Infinity premium audio system with eight speakers and Clari-Fi Music Restoration Technology.

Toyota's base model has Apple CarPlay and Amazon Alexa, a seven-inch touchscreen, Siri Eyes Free, and voice recognition. On the LE, the touchscreen is upgraded to an eight-inch version. HD and SiriusXM Radio, as well as more USB ports and connected services are included with higher trims.

Even at the most basic level of the Elantra, the car comes with a rearview camera. The camera feed includes guidelines so that it can be easier to maneuver into a small parking spot. All of the trims have a system that will send out an alert when it seems like the driver is losing focus on the road. Their safety suites include a program that warns drivers about upcoming collisions with other vehicles, and the brakes can be applied by the vehicle if necessary. The other driver-assist feature that's included in all models is Lane Keeping Assist.

On the SEL and above, there are more warning systems in place. Drivers will be notified when others are in their blind spots as well as when other cars are crossing their path when they're in reverse.

These are all in addition to anti-lock brakes, a comprehensive airbag system, crumple zones, and mechanisms designed to improve traction in slippery conditions. The Corolla has these features as well.

The Corolla's safety system is called Toyota Safety Sense 2.0. It includes a full set of driver-assist features that are generously included in all trims. While it has comparable features to those offered by Hyundai, it does offer more.

The similar features that are seen in the Elantra include a rearview camera and a pre-collision system that can take action if a front-end collision is anticipated. The difference is that Toyota's package includes the ability to detect pedestrians, even in low light, and cyclists during the day. The Toyota sedan can warn drivers if they drift out of a lane and correct steering for them. High beams are automatic.

What's included on the Toyota that some customers may be drawn to is a full-speed range dynamic radar cruise control. This type of cruise control works at all speeds, which is different than some others that only work within a certain range. Radar and a front camera are used to determine whether the Corolla has to speed up or slow down to maintain proper distancing with the car in front.

Notably, the Corolla doesn't have the blind spot monitoring system that the Elantra does.

Beyond what's already been mentioned, there are some differences between the trims. For instance, heated side mirrors become standard on the SEL, a hands-free trunk release that comes in handy with groceries or loading up before trips is included on the Value Edition and above. Cosmetic additions like special front and rear fascia and chrome molding come on the higher trims. LED headlights and taillights are only included on the Limited and Sport.

Like the Elantra, there are features included with the higher trims that are simply not
able to be included at the price that the L and LE are being offered for. Those include LED headlights, heated outside mirrors with turn indicators, moonroofs, and more premium wheels. Some of these are simple conveniences, and others can change the overall driving experience.

Both of these vehicles are smart purchases for those who want their limited budget to go far. They're safe and dependable, with some stylings that give them some flair and interest. The Elantra may edge out the Corolla considering its greater affordability, but the Corolla would be the way to go if fuel economy is important.

Save Money on a 2019 Hyundai Elantra:
Are you Shopping for a New Vehicle? Find the Best Deals with "Free - No Hassle" Prices Quotes.