2019 Hyundai Sonata vs Honda Accord 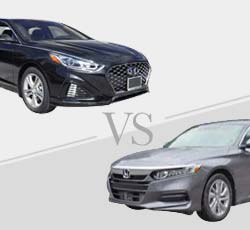 For many people, a mid-size sedan is the most practical choice when it's time to buy a new vehicle. Two solid contenders in this category are the Hyundai Sonata and the Honda Accord. Both are excellent in terms of efficiency and comfort, and a few differences in terms of performance, technology, and conveniences should be factored in when making a decision.

Four out of the five trims on the 2019 Hyundai Sonata are powered by a 2.4-liter GDI engine with four cylinders. Capable of generating 185 horsepower and 178 pound-feet of torque, the engine is fairly capable of giving the car a bit of a kick when accelerating. It's paired with a six-speed automatic transmission that comes with SHIFTRONIC. SHIFTRONIC gives the drivers the opportunity to manually shift if they want that feel of a stick-shift car. Additionally, there is a drive mode selection in which one can choose whether to maximize efficiency or power, or just keep things in the normal mode.

Fuel economy on the SE is an estimated 26/35 (city/highway) mpg. Though the SEL, Sport, and Limited have that same engine, their fuel economy is an estimated 25/33 mpg. On the Sport, drivers can take advantage of paddle shifters on the steering wheel.

The Sonata Limited 2.0T is the premium offering from Hyundai. Its twin-scroll turbo engine with four cylinders and a displacement of two liters gets an impressive 245 horsepower and 260 pound-feet of torque. The tradeoff when increasing the power is a slightly lower efficiency, as this model gets an estimated 23/32 mpg. Rather than the six-speed transmission that the others have, this model gets an eight-speed transmission. Its paddle shifters are conveniently located on the steering wheel and fun to use.

The Hyundai Sonata uses four-wheel disc brakes, MacPherson front struts with coil springs, and independent multi-link suspension in the rear. The wheels range from 16-inch alloys in the base model to 18-inch alloys in the Limited Turbo.

A very similar suspension system is integrated into the 2019 Honda Accord. In the Accord, there are ventilated front disc brakes and solid rear disc brakes, and some of the higher trims have power-assisted ventilated front brakes. Most of the Honda wheels are 17" machine-finished alloys, but the Sport has 19" machine-finished alloys that have black inserts for extra style.

Both cars have a sporty and stylish look and feel, especially when considering what their predecessors were like. The Hyundai has a total passenger volume of 106.1 cubic feet, with 16.3 cubic feet in the trunk. Leg room is pretty good for the front passengers, at 45.5 inches. Taller passengers may feel a little bit cramped in the back, as leg room is 35.6 inches in the rear. If extra space is needed for storage, the back seat can be folded down in a few different ways, as it's a 60/40 split bench.

The trunk space in the Honda is slightly larger, providing 16.7 cubic feet of storage room. Total passenger volume in the Accord is 105.6 cubic feet. When comparing leg room, the Accord offers up a little less space in front but more in the back. Leg room is 42.3 and 40.4 inches in the front and rear, respectively. All of the Accord trims with the exception of the LX have a 60/40 split bench.

Power windows and door locks, adjustable steering wheels, and dual illuminated vanity mirrors are standard elements found on the base Sonata SE model. On the SEL, the steering wheel and shift knob are wrapped in leather, and the steering wheel is a heated version. At this level, the driver seat gets power controls versus manual ones, and both front seats are heated. Helping with comfort on the SEL and above are a dual automatic climate control system and vents dedicated for the rear passengers.

In the Sonata Sport, a lot of style is gained by the addition of the power tilt-and-slide sunroof. Also helping in this department are sport seats with leather bolsters, a sport shift knob, aluminum pedals, and 3D tech accents in the cabin.

At the Limited trim, seats are more luxurious in leather, and the passenger seat becomes power-operated. The front seats are ventilated in addition to being heated, and drivers can easily make adjustments using the Integrated Memory System for the seat and mirror positioning. One difference with the Limited 2.0T is that it has leather sport seats.

In the Honda, there are also the expected features like power locks, power windows, interior lights, and cup holders. Starting at the base LX model, the car gets push button start, dual-zone climate control, and 12V power outlets. An advanced rearview mirror that can automatically dim when it detects bright lights and ambient lighting when the door is opened are some of the luxury elements saved for the higher trims, as is the Home Link Remote System that is very similar to Hyundai's remote program.

In terms of seating, the Honda LX comes with a manually adjustable driver's seat and cloth seats throughout. In the Sport and above, more upgrades are included. These trims have power-adjustable drivers' seats and heated front seats. In the EX-L and Touring trims, the drivers' seats have two-position memory and all seats are leather-trimmed. The Touring is the one that has the most embellishments, such as ventilated front seats and heated rear seats.

Technology is always important to consider in modern vehicles. The Sonata SE comes with a seven-inch touchscreen and a six-speaker audio system in addition to the coveted Android Auto, Apple CarPlay, and Bluetooth compatibility. These features can make a big difference in convenience when people are making and receiving calls, sending messages, and playing their favorite music.

On the SEL, the next level up, the system includes the ability to play HD Radio and SiriusXM Satellite Radio. Other perks are wireless charging and the Blue Link Connected Car System. This package lets a driver connect with her or her car through a mobile device. Drivers can start up the engine, adjust the temperature, lock or unlock the doors, find the vehicle's location, and look at vehicle diagnostics. It's a powerful program for anyone who loves staying connected through tech.

The next major upgrades are included on the Limited 2.0T trim of the Hyundai. It's touchscreen is enlarged to eight inches, and instead of the standard speaker system, it uses an Infinity premium audio system. There are a total of 10 speakers, plus a subwoofer and 400-watt external amplifier. This infotainment system comes with integrated navigation, which is helpful when traffic is hard to predict or someone isn't familiar with city streets.

Likewise, the base model of the Accord comes with a more simple system with four-speakers and a seven-inch WVGA screen. However, these cars do have Bluetooth and Pandora radio capability. Only on the Sport and above is the infotainment package more comprehensive. At this level, there are eight speakers, an eight-inch high-resolution touchscreen, and Apple CarPlay and Android Auto integration. HD and SiriusXM Radio come standard starting at the EX trim.

In the EX-L, the sound system gets enhanced to a 450-watt premium system with 10 speakers and a subwoofer. In the Touring, navigation becomes integrated with the touchscreen, wireless charging is available, and the car can act as a Wi-Fi hotspot.

To keep passengers safer, Hyundai has included a number of driver-assist features. Unfortunately, the package in the base SE model is petty limited. At that starting trim, the vehicle gets a rearview camera to provide drivers with better perspectives while they're backing up. The SE also gets a blind spot detection system, a warning system that can notify drivers if there is rear cross-traffic while they're in reverse, and assistance during lane changes regarding other vehicles in the way.

Standard features like anti-lock brakes, traction control, and a full range of air bags are included on all models.

In the SEL and Sport trims, there's the option to include Lane Keep Assist and Emergency Braking, which can engage if there is another vehicle or pedestrian in the way. On the Limited, those two programs come standard, and there's the option to include rear parking sensors that can assist in difficult parking situations. Further, the Limited trim has smart cruise control that can maintain proper distancing. This advanced cruise control is an option on the SEL and Sport.

Switching to the Honda, there are airbags, crumple zones, and three-point seatbelts that are always ready to keep people safe. Honda has built all of their Accords with anti-lock brakes, stability control, and electronic brake distribution much like Hyundai has done with their Sonatas.

All of the Honda trims have a collision mitigation braking system, warnings that can indicate the likelihood of front-end accidents, and a mitigation system that alerts drivers when they're veering out of a lane. These features are part of the Honda Sensing package.

It further includes adaptive cruise control that even works at low speeds, a recognition system that can read traffic signs and display that information on the vehicle's screen, and corrective steering that will kick into gear to help the car stay centered in a lane. Interestingly, the blind spot monitoring system, that includes a cross traffic monitor, is only included on the higher trims.

Both of these cars do well in many categories, including interior comfort, overall style, performance, and safety. The Honda Accord does offer a little more value, though, so if the additional money can be spent, it may be a wise move. This is especially the case if anyone really values efficiency and wants to drive a hybrid vehicle. At the same time, anyone who prioritizes affordability in this match-up would likely be more attracted to the Hyundai Sonata.

Save Money on a 2019 Hyundai Sonata:
Find New Car Clearance Prices - Many Vehicles are Selling Below Dealer Invoice Prices.

Every dealer offers a secret price. Many prices are below invoice. Find yours here.
2019 Hyundai Sonata Comparison Guides: