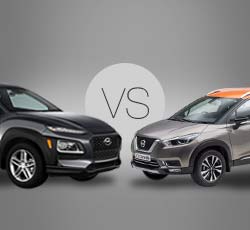 Although many people associate SUVs with larger vehicles that have room for big families, extra-small models exist as well. These subcompact models make the ideal commuter for those who also need a little extra space. They can also serve smaller families well.

The Hyundai Kona has been one of the most popular vehicles in this class for some time. It has a good deal of features for the money and a comfortable cabin. Plus, its available turbocharged engine and responsive handling make it a joy to drive.

Nissan's entry to the extra-small SUV market is known as the Kicks. It will attract attention from buyers thanks to its incredibly low starting price and good fuel economy numbers. This option also has a larger-than-average cargo area, increasing its practicality.

Of course, both the 2020 Hyundai Kona and the 2020 Nissan Kicks have their downsides. Both the perks and drawbacks of each SUV should be carefully weighed by consumers. The following guide addresses these things in all of the most important vehicle aspects to assist in the decision making process.

Two different engines are available for the Hyundai Kona. They are trim-level specific, with the SE, SEL, or SEL Plus models getting a 2.0L four-cylinder. With this underneath the hood, the Kona has the ability to make 147-horsepower and 132 lb-ft of torque. Drivers who go with this engine will find it paired to a six-speed automatic transmission.

Going with either the Ultimate or Limited trim levels means that the Hyundai Kona upgrades to a turbocharged 1.6L four-cylinder engine with the ability to make 175-horsepower and 195 lb-ft of torque. This amount of power in a vehicle of its size means the Kona is responsive and fun. For these top two trims, the Kona gets a dual-clutch seven-speed automatic transmission instead.

Standard across the line is front-wheel-drive. Any model can also be upgraded to all-wheel-drive if a buyer prefers. Going with all-wheel-drive will also mean getting a Kona with a lockable rear differential, helping to give it better traction at lower speeds. It also adds a more sophisticated rear suspension to the setup.

The powertrain of the Nissan Kicks is one area where it severely lags behind the Kona. There is only one engine available, a 1.6L four-cylinder. This non-turbocharged engine offers only 122-horsepower and 114 lb-ft of torque, making it nowhere near as powerful as either engine option for the Kona. Plus, the Kicks is only available with front-wheel-drive.

Where the Kicks manages to get back in the game is with its fuel economy. This vehicle is EPA estimated to get 31mpg while in the city and 36mpg on the highway. Those are great numbers for a vehicle of this size.

The Kona is no slouch when it comes to fuel economy either, although it cannot keep up with the Kicks. The base engine with front-wheel-drive will get buyers 27mpg city and 33mpg highway. Going with the turbocharged engine will mean getting 28mpg city and 32mpg highway. Deciding to go with all-wheel-drive will drop both the city and highway numbers down by two miles per gallon for either engine option.

Those who are looking to tow regularly with their new SUV will want to skip both the 2020 Kona and the 2020 Kicks. Towing is not recommended with either option. They both are available with roof rails, however, making them a bit more practical.

J.D. Power gives buyers an estimated reliability rating for vehicles. For both the 2020 Hyundai Kona and 2020 Nissan Kicks, they gave out 3.5 out of a possible five stars. This is considered slightly better than average.

When looking at the exterior dimensions of these vehicles, buyers will notice that the Kicks is longer and taller, while the Kona is wider. This is reflected in the amount of space they give passengers. Unsurprisingly, the Kicks offer front-row occupants more legroom and headroom, while the Kona has more shoulder and hip room.

Moving into the second-row of these five-seater SUVs, buyers will find that Kona has more legroom, shoulder room, and hip room. The Kicks offers less than an inch more headroom than the Kona in the back. Ultimately, these two SUVs are so similar in size that this may not be a factor in the final decision.

Buyers concerned with the amount of cargo space they can get from an extra-small SUV may find themselves preferring the Kicks. This Nissan offers 25.3 cubic feet behind the second-row of seats, a great number for this class. With the back seats down, drivers will find they have access to 53.1 cubic feet. While this is another impressive number, it is important to note that these seats do not fold completely flat, which reduces the usability of the space slightly.

Inside the Hyundai Kona, drivers will get 19.2 cubic feet to work with behind the second-row. The maximum cargo capacity is 45.8 cubic feet, significantly less than what the Kicks has to offer. In fact, the Kona's numbers are low compared to most subcompact SUVs.

Both drivers and their passengers will likely enjoy their time inside the 2020 Kona. It has a tight turning radius, responsive handling, and great acceleration, especially with the turbocharged engine. As for the passengers, they will find that the Kona's design helps it to absorb most of the bumps in the road, provided the driver avoids the bigger potholes. Although the Kona is no off-roading beast, all-wheel-drive models can do decent when hitting the trails.

Despite being longer, the Kicks is also easy to turn and to maneuver. It also does an adequate job when it comes to not letting minor bumps in the road jostle passengers. The handling is not as sharp as what driver's will get in the Kona, however. The lack of all-wheel-drive also limits its off-road ability, although it does have slightly more ground clearance than the Kona.

Cloth upholstery is the standard for both of these subcompact SUVs. Either one can also have heated front seats, leather upholstery, and a leather-wrapped steering wheel, depending on the trim. The Kona also offers eight-way power-adjustment for the driver's seat.

When it comes to using the infotainment systems, both the Kona and the Kicks have a 7-inch touchscreen. While the Kona offers an 8-inch screen on select models, there is no larger option for the Kicks. Both systems combine physical knobs and buttons with the touchscreen controls, making them very user-friendly.

Those who are looking for smartphone integration through Android Auto and Apple CarPlay will appreciate the fact that these are standard features on all models of the Kona. They are not available on the entry-level model of the Kicks, but join the list of standard equipment on the upper two trim levels. Both of these SUVs come standard with Bluetooth. While the Kona has two USB ports standard, the Kicks has three.

Driver aids are quickly becoming one of the most important things to consumers. Both of these SUV offerings have several standard driver assistance features. Either option will get buyers a rearview camera and forward-collision alert on any model that they choose.

The 2020 Hyundai Kona also has a driver attention monitor and lane keep assist standard. As for the Nissan Kicks, it has an even longer list of standard driver aids. It includes pedestrian detection, automatic emergency braking, lane departure warning, blind-spot monitoring, rear cross-traffic alert, and even rear parking sensors. The Kicks will also give buyers automatic high beams on all models.

The Kicks already has a long list of driver aids standard. Buyers will find that select models further add a driver attention monitor. Going with the top-of-the-line SR will also add the popular surround-view camera system to the Kicks. This is not an available feature for the 2020 Kona. On the flipside, adaptive cruise control is not available for the Kicks.

The Insurance Institute for Highway Safety also rates vehicles in various safety categories. Both the 2020 Kicks and the 2020 Kona received a "Good" rating down the line. Things tested include head restraints and seats, roof strength, and side strength.

Those looking to spend as little as possible on a subcompact SUV will want the entry-level model of the 2020 Nissan Kicks. At only $18,870 as a base price, this vehicle is hard to beat when it comes to initial price. The mid-level option will set buyers back $20,500, while a top-trim will cost them $21,120.

The least expensive version of the 2020 Kona will cost buyers $20,100. This is a very respectable price for the class. Moving all the way up to the top trim will mean looking at a price tag of around $27,750.

Factoring value means looking at more than just the initial price, however. Buyers will also want to examine how much owning either of these vehicles will cost them over time. This is called the cost of ownership.

For the 2020 Hyundai Kona SE, Kelley Blue Book estimates an out-of-pocket cost of $16,563 over a five year period. This includes things like financing, fuel, insurance, and maintenance. The vehicle is estimated to lose $12,950 in value over that time period, for a total cost of ownership of $29,513.

As for the 2020 Nissan Kicks S, the estimated out-of-pocket expenses is $16,125. It is somewhat surprising how close this number is to that of the Kona, considering the increased fuel efficiency of this SUV. The Kicks S is estimated to lose $11,184 in value over five years, making its overall cost of ownership $27,309.

In a lot of ways, the Nissan Kicks looks like the better value. It has a lower starting price, lower cost-to-own estimate, and comes with more standard driver aids than the Kona. However, the uninspiring engine and driving dynamics greatly detract from its appeal. Buyers who factor in how much they enjoy driving their SUV may decide the Kona is a better value after all.

The 2020 Hyundai Kona is a top-rated subcompact SUV. Although not less expensive than the Kicks, it still has a relatively low starting price and highly respectable fuel economy numbers. Plus, it offers standard smartphone integration. Drivers who are after an affordable smaller SUV that is fun to drive cannot do any better than the 2020 Kona.

At the same time, the 2020 Nissan Kicks is a good buy for some. Anyone who wants as many cutting-edge safety features as possible for as little as possible, for example, will be well-served by the Kicks. Its great fuel economy numbers also make it a practical, if not exciting, daily commuter vehicle.

Save Money on a 2020 Hyundai Kona:
Find New Car Clearance Prices - Many Vehicles are Selling Below Dealer Invoice Prices.