2020 Hyundai Sonata vs Honda Accord 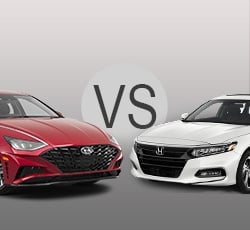 Sedans may not dominate the market like they used to but there are still several strong options out there. Both the 2020 Hyundai Sonata and 2020 Honda Accord are popular with consumers and are considered to be smart choices. Both are classified as midsize sedans, meaning they can be used as a family car, daily commuter, or both.

The Hyundai Sonata gets a full redesign for 2020, which launches its seventh generation. Buyers will notice subtle differences to the appearance both inside and out compared to previous models. Hyundai also loads the Sonata with more technology than ever before, something that will appeal to drivers.

Honda's popular Accord is in its tenth generation, something that attests to its enduring popularity. This generation kicked off in 2018. There are no significant changes made moving into the 2020 model year. Still, it has two great engine options as well as a sporty handling, making it great for driving enthusiasts.

Both are ranked highly by critics and drivers alike. So which is the smarter buy? Personal preferences are significant when choosing. The following breakdown can help buyers see which sedan has the features that lineup with their needs.

Like the Sonata, the 2020 Accord has two engine choices. Most models are powered by a turbo 1.5L four-cylinder that makes 192-horsepower along with 192 lb-ft of torque. Standard for the top trim and available on select others is a turbo 2.0L four-cylinder that gets 252-horsepower and 273 lb-ft of torque. Sticking with the standard engine means getting a continuously variable transmission while the upgrade gets an 10-speed automatic. The Sport trim can also have a six-speed manual when it has the more powerful engine.

Those number for the Sonata are good, but the Accord can do even better. The standard engine will have drivers seeing 30mpg and 38mpg on the highway. Those who want a more exhilarating drive will have to sacrifice fuel economy. The turbo engine with the manual transmission is estimated to get only 22mpg in the city and 32mpg on the highway.

While the Accord may seem more appealing at this point, buyers should also factor in predicted reliability in their decision. The 2020 Sonata received four out of five stars in this category from J.D. Powers. As for the Accord, it received only 2.5 stars.

The backseat is another story. Passengers will still find more headroom in the Sonata and more shoulder room in the Accord. However, the Sonata offers only 34.8-inches of rear legroom while the Accord has 40.4-inches to stretch out in.

When it comes to cargo space, the 2020 Sonata has 16-cubic feet for groceries or other gear. This would be considered about average for a midsize sedan. The Accord's trunk has a bit more room to work with, measuring in at 16.7 cubic feet. At the same time, the narrow opening of the trunk reduces the practicality of the sedan.

Tech-savvy buyers will want to know that the Sonata comes with more standard features. The touchscreen in entry-level models is 8-inches and a 10.25-inch screen is available as well. Smartphone integration with Android Auto and Apple CarPlay is also included for all versions of the 2020 Sonata.

The 2020 Accord, on the other hand, comes with a 7-inch touchscreen. Smartphone integration is not standard. Buyers need only to be willing to go up one trim level to get these features, however, as well as the 8-inch touchscreen.

Both of these sedans offer wireless device charging and satellite radio on upper trim levels. The Sonata can be had with a premium 12-speaker audio system from Bose. Going with the Accord will allow drivers to choose between an 8-speaker and a 10-speaker premium sound system.

Cloth upholstery is standard for both the Sonata and the Accord. Seats are supportive in either option, although the Accord offers a bit more support and will be better on a longer drive. Buyers can have either option with a variety of luxurious interior upgrades, including heated and ventilated front seats. The Sonata is available with genuine leather upholstery while the Accord can have leather-trimmed seats and a leather-wrapped steering wheel.

The ride in the Sonata is comfortable. Buyers will want to stick with the standard tire size, however, or they risk feeling more of the bumps in the road. The Accord offers a smooth ride as well, despite being a more athletic sedan.

The Insurance Institute for Highway Safety names both of these vehicles as top safety picks for 2020, provided they have the right headlights. Testing is done in six categories by the IIHS. Both the Sonata and Accord received the top score of "Good" in all six. When it comes to headlights, the Sonata gets either "Marginal" or "Good," depending on the trim. The Accord gets either "Marginal" or "Acceptable."

Both standard and available driver aids are very similar for these two vehicles. They both have adaptive cruise control, automatic high beams, forward collision warning, lane keep assist, automatic emergency braking, lane departure warning, and a rearview camera. The Sonata also has lane tracing assist, a driver drowsiness monitor, and pedestrian detection. As for the Accord, also standard are traffic sign recognition and a road departure mitigation system.

Select trim levels of both the Sonata and the Accord come with blind-spot monitoring and rear cross-traffic alert. The same is true of front and rear parking sensors as well as a head-up display. Also available for the Sonata only are nice upgrades like a surround-view camera system, reverse automatic braking, and a blind-spot camera.

The 2020 Sonata is also available with a remote parking assist feature. Ideal for tight perpendicular parking spaces, drivers can use this feature to automatically park and unpark their car. This feature is standard on the top-of-the-line Limited trim level.

Which Has the Better Value

Buyers who are hoping to decide between these two based on price alone are out of luck. The entry-level model of the Sonata starts at $23,400. As for the Accord, it costs just a hair more, starting at $23,870. Both of these numbers line up with what is considered average for a midsize sedan.

The ultimate version of the Sonata is called the Limited. It starts at $33,300. The top trim level of the Accord is known as the Touring. It is a bit pricier than the Sonata, starting at $36,100. For the Accord, the extra money for the Touring trim is likely due to the fact that it comes standard with the 2.0L turbocharged engine.

When comparing the Accord Touring and Sonata Limited, buyers will find a very similar set of features. They include heated and ventilated front seats as well as navigation. The Accord Touring further adds nice touches like heated outboard rear seats. It also gets wireless device charging, something that becomes standard on the mid-level SEL Plus. The Limited trim of the Sonata is even more impressive in some ways, giving drivers a 10.25-inch touchscreen, panoramic sunroof, genuine leather upholstery, and a leather-wrapped dashboard.

Some buyers may decide to then choose based on the "true cost-to-own" of the vehicles. This is an estimate of how much the vehicle will cost over the course of five years. It also factors in depreciation. Unfortunately, this is not a good way to choose between the two either.

For the Sonata, the out-of-pocket expenses for five years sits around $17,100. This is the money drivers are paying for basic repairs, fuel, maintenance, and more. Five years down the road, the Sonata is estimated to lose $15,300 when it comes to its value. Simply put, the Sonata will cost around $32,400 in those first five years.

Moving onto the Accord, drivers will find themselves paying a little more out of their pockets. Its estimated cost is $17,900. The extra money likely goes towards repairs that the Sonata's longer warranty covers and the Accord's does not. Still, the Accord manages to hold onto its value better. It is estimated to deprecite $14,600 in five years. Ultimately, this evens it out in comparison to the Sonata, giving it a five year cost-to-own estimate of $32,500.

Drivers who want a more thrilling experience behind the wheel will undoubtedly want the Accord. It offers great fuel economy along with an engaging drive and plenty of power. Although the entry-level model lacks a bit of tech, stepping up just one trim level is an easy way to fix this. Families with older children may also go with this route for the extra legroom in the backseat.

The Sonata may be more appealing to those who are practical. Its warranty and predicted reliability blow the Accord's out of the water. Buyers also get more features in the entry-level Sonata for a little less money.